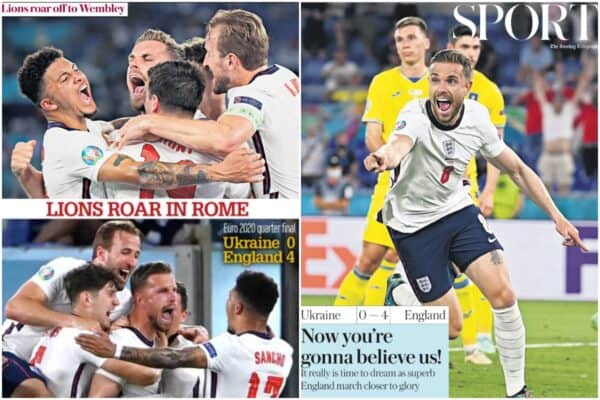 Jordan Henderson greeted with England “round of applause” after “crucial goal”

Jordan Henderson continues to earn the applause of those around him, this time for his “professionalism” and breaking his England duck in what was his 61st cap.

The Liverpool skipper has seen all his Euro 2020 minutes come off the bench to date, providing experience and energy in the final moments for Gareth Southgate’s team.

Had it not been for a groin injury that led to three months on the sidelines, Henderson would have been expected to be a regular in the starting XI.

But the reduced game time has not disheartened the 31-year-old, who remains a reliable and calm head and personifies what it means to be a team player.

And after missed penalties, offside calls and agonising misses, Henderson’s long wait for his first senior England goal ended with a brilliantly timed header against Ukraine for what was the final goal in a convincing 4-0 win.

It was just rewards for Henderson, who was welcomed with a “round of applause” by his teammates after he helped England book a place in the semi-finals.

“It’s a sign of his professionalism. First, he was coming on for Kalvin Phillips, then about 20 seconds before he came on we recognised Declan Rice had an issue so we changed,” Southgate said of his vice-captain.

“But he already knew the runs that Declan was supposed to be making with corners and that’s a great example for any young professional.

“He listens in the meetings, he knew both the players that he might be able to come on and replace, he knew the detail of their runs.

“It’s a small thing but it’s ended up as a crucial goal. Everyone gave him a round of applause as he came in!”

The passionate goal celebration was one Liverpool have come to know and it would cap off a brilliant 33-minute appearance, one that saw him complete more passes than any other England midfielder.

He was lauded after the final whistle, and rightly so, for not just his influence on the field but off it too, with Harry Kane helping to lead the charge.

Hendo and the boys delivered ?? Always love seeing the passionate celebration of the skipper #getoffmestonesy#threelions pic.twitter.com/qBziQO73QK

“I’m so happy for Jordan. It’s been a long time he’s been playing for England and I know he’s been desperate to score that goal,” Kane told reporters post-match.

“I said before the tournament that he’s a great leader and a great role model to have in this team and this squad.

“The boys are buzzing for him. He’s a top, top guy. I’ve known him for a long while and couldn’t be happier for him.”

The skipper could now face teammate Thiago in the final should both England and Spain win their semi-final fixtures against Denmark and Italy respectively.