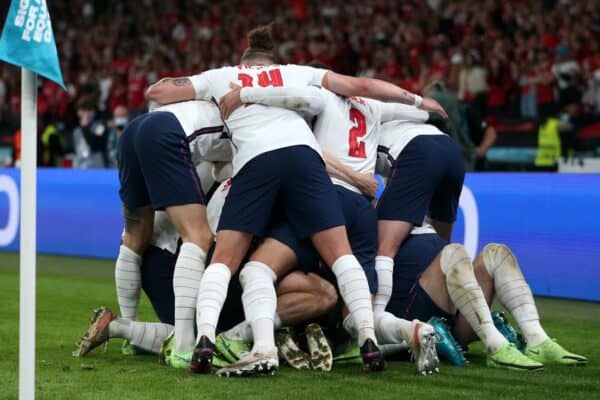 For the first time since the 1966 World Cup, England have reached the final of a major tournament, with Jordan Henderson featuring in the 2-1 win over Denmark.

It was England vs. Denmark in the semi-finals, with a clash with Italy in the Wembley decider up for grabs for whoever emerged victorious.

Spurred by an emotional start to the tournament with the sickening scenes surrounding Christian Eriksen’s cardiac arrest, Denmark got off the mark with the opener.

Mikkel Damsgaard’s stunning free-kick put the Danes ahead, but England responded emphatically with a mature, controlled performance that deserved an equaliser.

It came through great work from Harry Kane, Bukayo Saka and their MVP, Raheem Sterling, who forced an own goal from Simon Kjaer to make it 1-1 heading into half-time.

The scoreline stayed that way for 65 minutes, with the tie going to extra time which was ultimately decided as Sterling won a penalty, Kane stepped up to take and eventually converted on the rebound.

Henderson had made it onto the pitch by that point, replacing Declan Rice five minutes into the added 30, as he continues his small but vital role for England.

The Liverpool captain was crucial as the Three Lions held on for a 2-1 victory, which puts them through to their first major final since 1966.

England, of course, won that time out, which stands as their only major honour in a long and painful history, and now Gareth Southgate will be looking to make it a first trophy in 55 years.