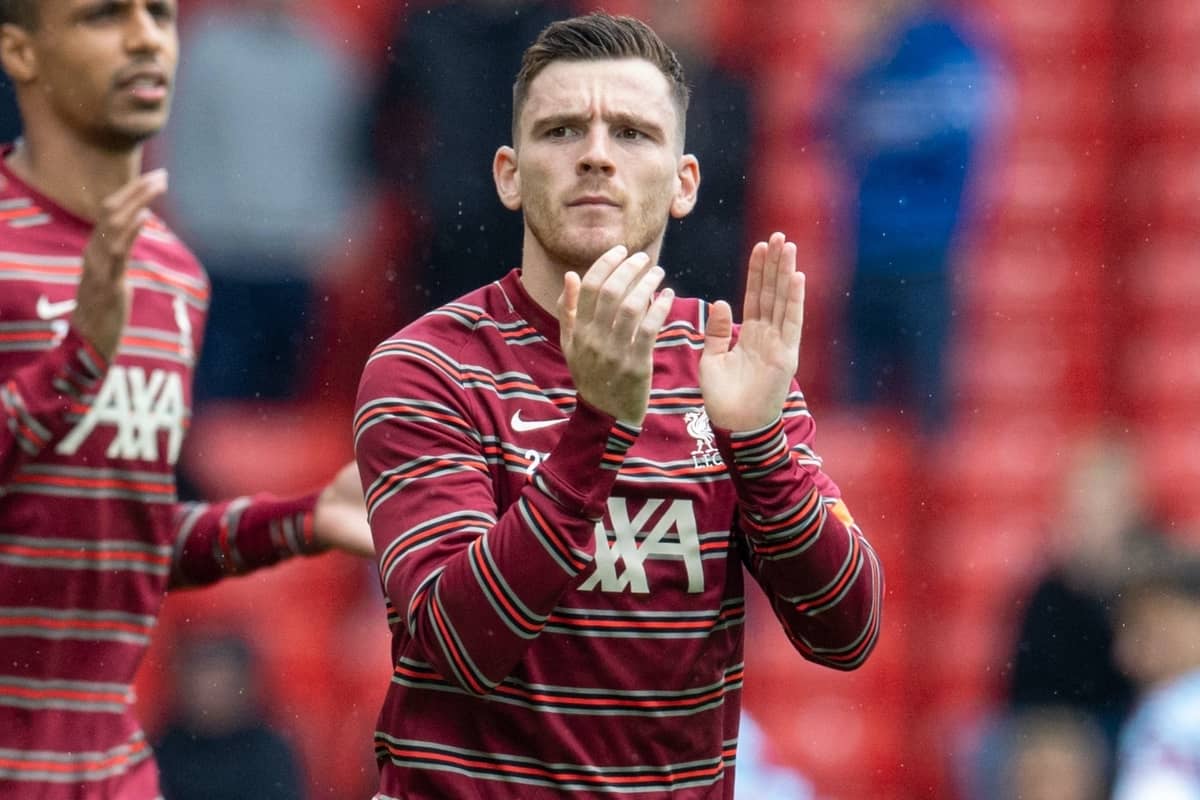 After two games out, Andy Robertson insist he is “ready to play” as Liverpool take on Chelsea this weekend, with the left-back buoyed by his new five-year contract.

Robertson signed a long-term deal with the club on Tuesday, extending his stay at Anfield until 2026, by which point he will be 32.

The left-back has been fortunate to not suffer with major injuries throughout his time with the Reds so far, but there was a worry in pre-season when he damaged his ankle ligaments.

But having sat out of the campaign opener at Norwich, Robertson was back on the bench for the 2-0 victory over Burnley last weekend, in an impressive turnaround in his recovery.

With Chelsea to visit Anfield on Saturday, Jurgen Klopp now faces a decision over whether to keep faith in Kostas Tsimikas or start a fit-again Robertson.

“I fully trained with the team on the Friday,” the No. 26 told the club’s official website.

“Obviously the gaffer put me on the bench, which was probably unexpected but I was happy.

“When you’re at the game and everything is involved you just want [to be] on the pitch, but I think that was unrealistic [against Burnley].

“Now I’ve trained today and I’ll have a full week of training so let’s see what happens against Chelsea. But I’ll be ready, I’ll be ready to play, and like I said I’ll hopefully be fit for the rest of the season now.”

Discussing the increase in competition at left-back with Tsimikas’ run in the side, Klopp stressed that it was “not a real problem,” because “it’s a problem when you don’t have a left-back.”

Robertson’s return to availability gives the manager a big call to make, but the smart money will be on the Scot, who admits he is a “nightmare when I’m injured.”

“Obviously I’ve been very lucky in my career that I’ve not had too many injuries and certainly not long-term injuries, and long may that continue,” he added.

“But yeah, I’m a nightmare when I’m injured and I want to get back out on the pitch as quickly as possible.”

The 27-year-old is the best left-back in the world, and despite Tsimikas’ impressive displays, it stands to reason that Robertson would be reinstated as quickly as possible.

Now Liverpool have two reliable options in the position, and that extends to the long term following Robertson’s new contract.