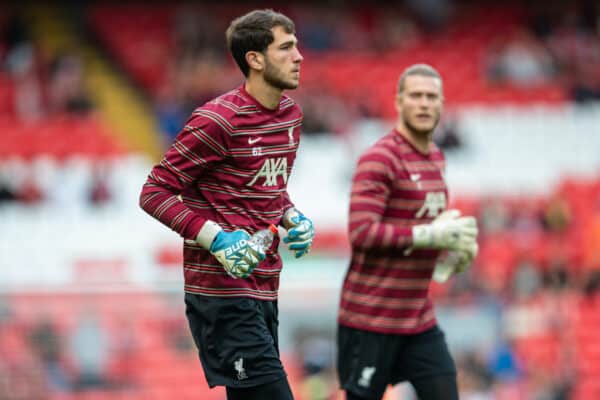 Liverpool goalkeeper Harvey Davies has earned his first-ever England call-up as part of the under-20s squad to play Romania at St George’s Park next month.

It has been a remarkable year for Davies, which has seen a rise from backup at under-18s level to being part of the first-team squad in the Champions League.

The 17-year-old was named on the bench for the last-16 second leg against RB Leipzig followed by both legs of the quarter-final against Real Madrid, which saw him catch the eye of Jurgen Klopp.

A directive was given to those within the academy that saw Davies then take up a regular starting role with the U18s, most notably in the run to the FA Youth Cup final, while he was included in the senior squad for pre-season.

Davies signed his first professional contract with the club in July, and has now received another honour with a call-up to the England U20s squad.

It is the first time the Scouser has been included in an England squad, and he is the youngest of the three goalkeepers selected by new coach Andy Edwards.

Leighton Clarkson is also part of the U20s squad for the first time, following the 19-year-old’s loan switch to Blackburn, setting him up to compete with the likes of Lewis Bate, Faustino Anjorin and James McAtee.

Meanwhile, young left-back James Norris has kept his place in the under-19s squad ahead of friendlies at home to Italy (September 2) and away to Germany (September 6).