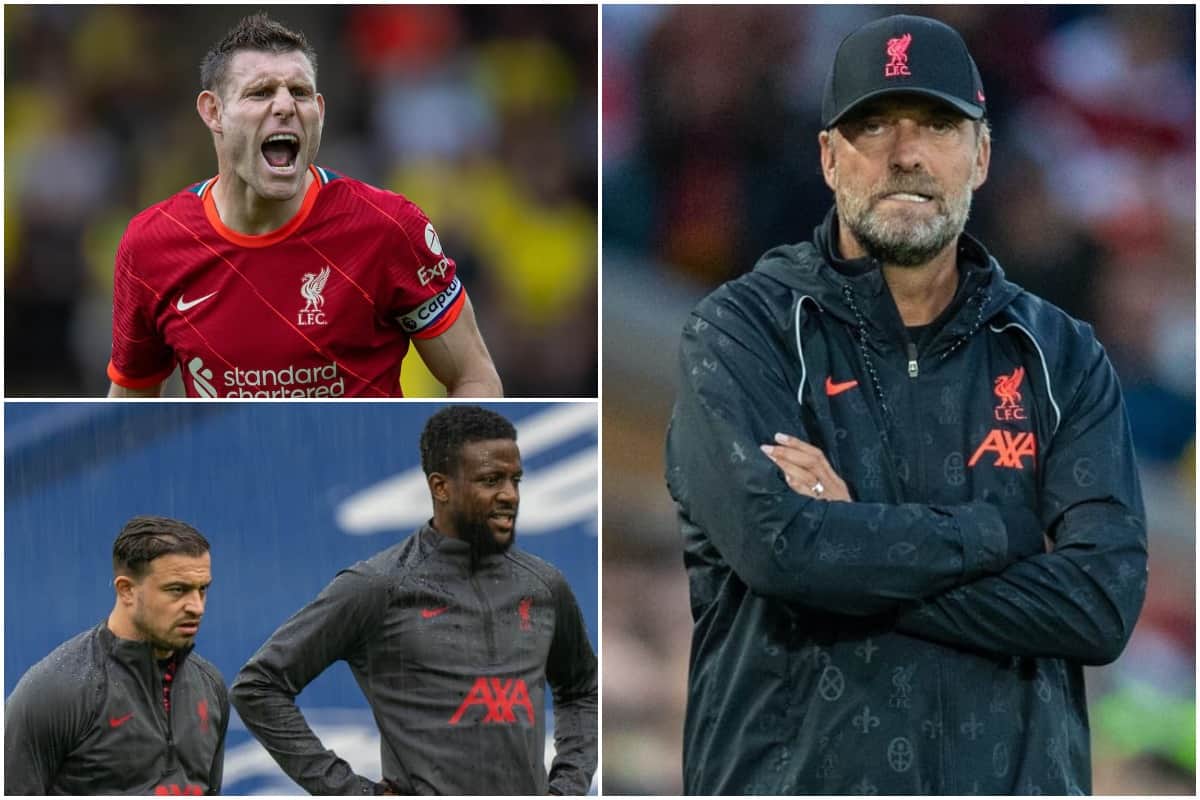 Two games, two wins, what more do you want? Another match and victory at Anfield, of course. That’s a week away and there’s plenty to get through before then.

There remains a week and a day of the transfer market, so first and foremost the Reds’ off-pitch contingent will likely be working on that.

More outs than ins, you would think, but there’s always the possibility of a surprise deal in the works.

A week of tactical planning for Jurgen Klopp and his squad also lies ahead, before a massive clash with Chelsea next Sunday and the first international break of the season which follows.

Futures to be sorted

Sales, and maybe, just maybe, something else.

Nat Phillips, Divock Origi and Xherdan Shaqiri are top of this pile, players being left out by the Reds at the start of the season and likely to see their futures elsewhere.

It may turn out that one or more of them stay, but at least one could well depart in the coming days.

On the buying side? Maybe one, maybe none. A forward is most likely if Shaq or Div depart.

We might just also get another update on new contracts for Hendo or Salah, though there’s no rush on either one.

Alex Oxlade-Chamberlain should be back involved after skipping the weekend win over Burnley due to the birth of his child.

Congrats to Ox and Perrie, first and foremost! And, all being well there with mother and child, he will surely be back among Jurgen Klopp‘s options in training and the build-up to the match.

James Milner, meanwhile, missed out against Burnley with a “minor” knock, so again the expectation will be on him returning at some stage in the week.

And, finally, Fabinho could be ready to return, following the sad passing of his father. As Klopp said, he’ll simply be given the time and love he needs.

Eyes on the South Americans in particular, here.

If all three Brazilians go, they’ll be hard-pushed to make it back in time and in full freshness for the match against Leeds.

But there will be three matches apiece to deal with for the Europeans, too.

Virgil van Dijk is expected to return to the Netherlands squad after missing the Euros, while the same could be the case for Trent with England, too.

Leighton Clarkson is the most high-profile youngster to get a loan move so far for the Reds, with Paul Glatzel heading out too for some senior action.

Jake Cain appears a good bet, while Ben Woodburn is already close to sealing his switch to Hearts.

Rhys Williams might also seek more games with a loan switch, while on the senior side, Taki Minamino remains a possibility, though a less-likely one if Shaqiri, for example, is sold.

Liverpool are in the Champions League again and this week they will discover their opponents for the group stage.

The draw is being held in Nyon on Thursday, August 26, with the Reds in Pot 2.

That means they could come up against the likes of Atletico Madrid, Bayern Munich and Inter Milan from Pot 1, Porto, Ajax and RB Leipzig from Pot 3 and possibly AC Milan from Pot 4.

This Is Anfield will be bringing you full details and coverage of the draw later this week.