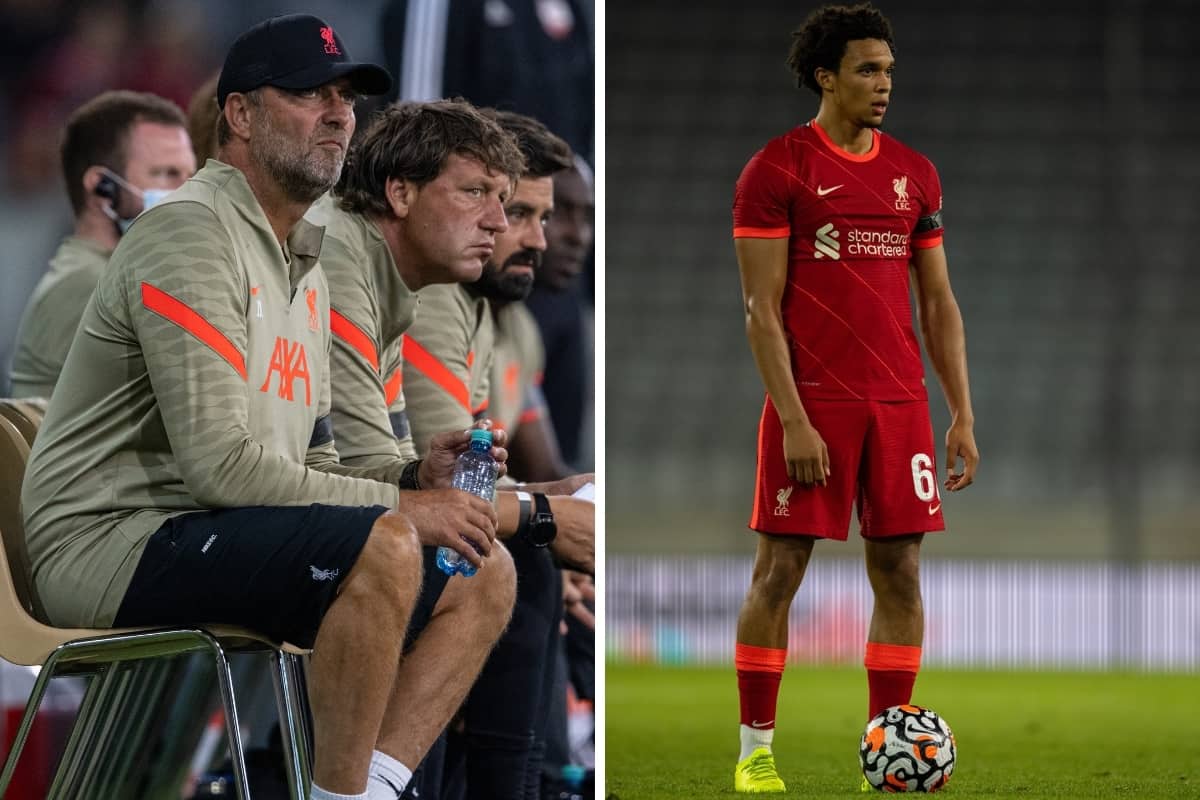 Liverpool’s set-piece takers have been working with a pioneering group of coaches during their time in Evian, to work on their approach to free-kicks and penalties.

Set-pieces are an undoubtedly important part of the modern game, and the Reds are among the clubs looking to take full advantage of those situations whenever possible.

The appointment of throw-in coach Thomas Gronnemark was met with bemusement back in 2018, but now into his fourth season with the club, the Dane is clearly making a positive impact.

When it comes to free-kicks and penalties, Liverpool are blessed with a number of players capable of finding the back of the net from a regular basis, chiefly Trent Alexander-Arnold and Mohamed Salah.

Alexander-Arnold and Salah have been among those working with German mental strength coaches Niklas Hausler and Patrick Hantschke during their time in Evian, designed to give them “more accuracy” in taking set-pieces.

Hausler and Hantschke are founders of the company neuro11, who specialise in brain training among athletes, having worked with a number of clubs in the Bundesliga.

“Niklas and Patrick did some unique work with some of our takers of free-kicks and penalties,” Liverpool’s assistant manager Pepijn Lijnders has explained.

“They give the right input for players to find the right flow and, with this, more accuracy.

“They help with putting the players in the right frame of mind and how to reset.”

It is the latest in a long line of marginal gains Jurgen Klopp and his staff have looked to utilise both in pre-season and during the campaign, which will hopefully benefit Liverpool in the long run.

The time in Evian also saw the Reds welcome adventurer Ben Fogle in for a series of talks, while in the past surfer Sebastian Steudtner has worked with the squad on breathing exercises.

neuro11 work to help players control their brain and find what they describe as the “optimal mental state,” that being “flow.”

“It’s simple and it’s fun,” Hausler and Hantschke have explained of their work in football.

“You shoot free-kicks. We record your brain activity and calculate your own unique neural activity index.

“Based on this index, we tailor your training so that you learn to control your mind and reach the flow-state at any time. It’s research-based and it works.”

Perhaps we’ll be seeing Trent whip them into the top corner more often this season, then!