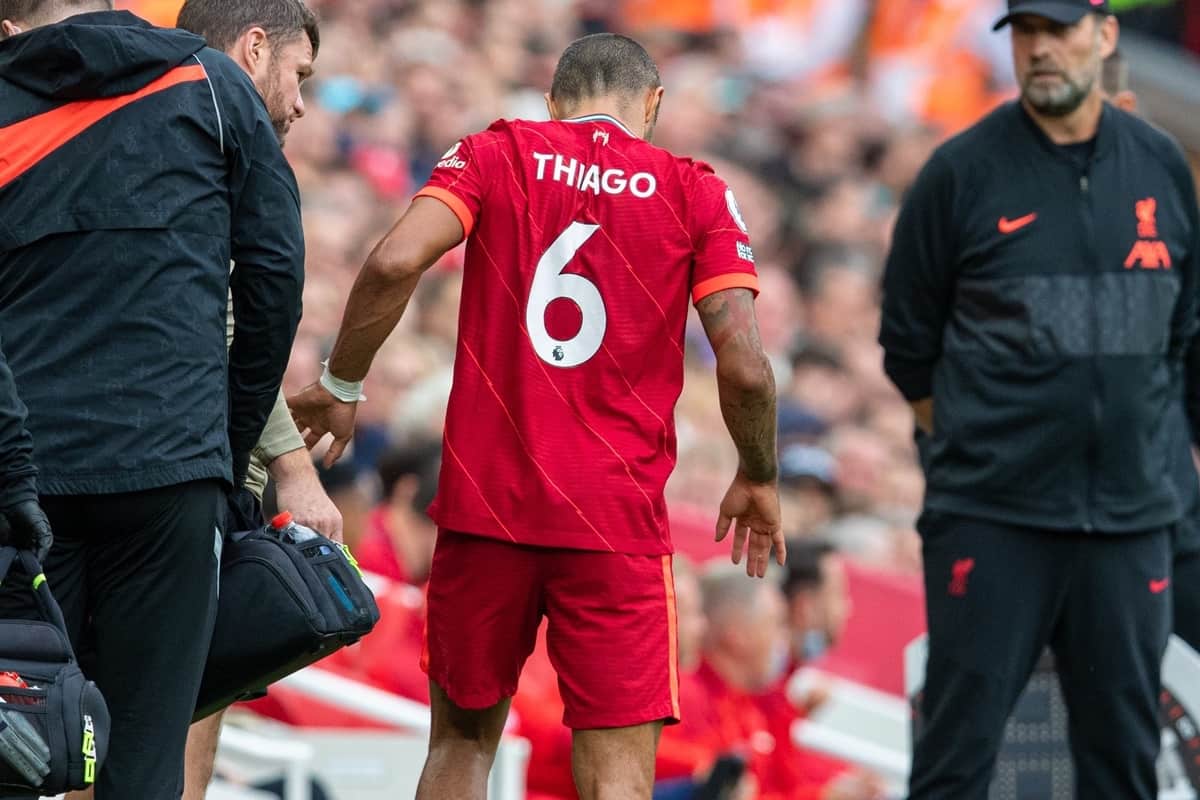 Thiago will miss both of Liverpool’s trips to Norwich and Brentford at the very least, while Tuesday’s League Cup tie comes too soon for Trent Alexander-Arnold and Roberto Firmino.

The No. 6 was a casualty in the Reds’ 3-0 win over Crystal Palace on Saturday, with a calf complaint forcing his substitution in the 62nd minute before he hobbled down the injury tunnel.

Jurgen Klopp was left hoping it was not “too serious” in the immediate aftermath and now assistant manager Pep Lijnders has confirmed he will be unavailable for the next two games.

The final scan results are yet to be confirmed meaning the two-game absence is on the short-term spectrum, meaning Liverpool have lost two “influential” midfielders in the space of one week.

“Thiago, how the gaffer said after the game, it was a calf injury. I can’t say now how long it will take but definitely not tomorrow and not at the weekend,” Lijnders told the club’s official website.

“Let’s get the scan results back and we have a proper diagnosis. A shame as well because he was taking the game by the hand, he was a proper playmaker in my opinion. A shame that we miss him.

“In one week we lose two really influential midfielders, that’s the bad thing.”

Trent Alexander-Arnold, meanwhile, was a late omission from Liverpool’s squad on Saturday after falling ill in the morning, requiring James Milner to step in.

And the right-back will once again be absent against Norwich, with the game coming “too early” – which is also the case for Roberto Firmino three weeks on from his hamstring injury.

“It was not easy because these guys – it says a lot about our group anyway – they want to play everything, [even] if they feel a bit shaky or ill. But he took the responsibility,” Lijnders added.

“That’s Trent, there are no symptoms – no COVID symptoms. We test regardless. He should be fine in a few days but Norwich comes too early.

Firmino will return to “parts of team training” on Monday in a welcome boost for the weeks to come, with the Reds still to contest three games in the space of eight days after the trip to Carrow Road.

Neco Williams is “progressing really well” from his respective injury, but he too is not ready for Norwich, meaning the likes of Milner, Joe Gomez and Conor Bradley are in the running for a right-back berth.