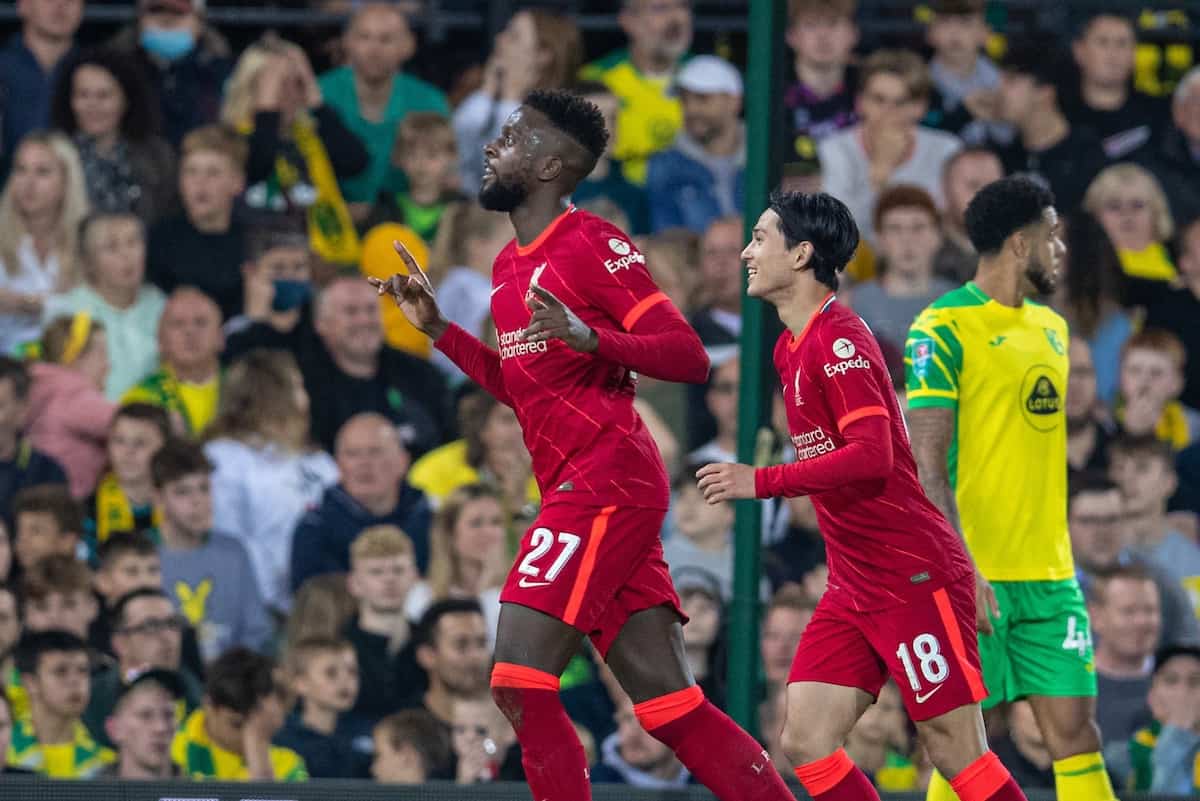 Liverpool’s attacking fringe players impressed the watching media against Norwich, suggesting the Reds may be sorted in that area for the time being.

The Merseysiders eased to an impressive 3-0 victory at Carrow Road on Tuesday night, even though Caoimhin Kelleher had to make a first-half penalty save.

Takumi Minamino scored crisp efforts either side of half-time, while Divock Origi also found the net with a well-taken header.

Liverpool’s win was rarely in doubt and they now have a fourth-round tie to look forward to next month, with their opponents named on Wednesday evening.

Here’s how the media reacted to the win. 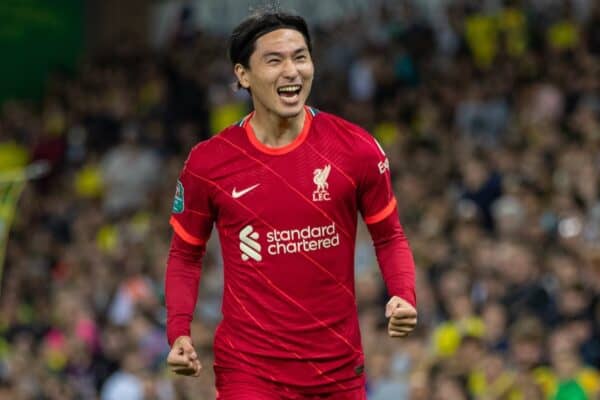 Goal‘s Neil Jones was encouraged by what he saw from the attacking duo:

“Minamino’s performance was encouraging, to say the least. Slick and busy, he looked more like the player Liverpool signed from Salzburg than the one they shipped out on loan to Southampton.

“He deserved his second goal of the night, 10 minutes from time, squeezing the ball home at the near post after Bradley had won the ball back tenaciously on the edge of the Norwich box.

“Origi, too, had a good night. Involved in the first goal, he scored the second with a towering header from another fine Tsimikas delivery from the left. It was his first goal in nearly a year, and his 10th in 14 League Cup appearances. He is not done yet at Anfield, it seems.”

Ian Doyle of the Liverpool Echo is also confident that the duo have a key part to play in the coming months:

“Back in the summer, few would have envisaged Divock Origi and Takumi Minamino helping spearhead a Liverpool attack.

“Both were touted for an imminent departure, Minamino having spent the second half of last season on loan at Southampton, Origi not having started a game since January.

“But if Origi, if not rekindled, then at least restarted his Anfield career with his shock outing against AC Milan in the Champions League last week, it was the turn of Minamino to make the most of his opportunity here.

“Minamino doesn’t have to look far for inspiration, the latest revival of Origi another example of Klopp willing to put faith in the resources at his disposal.”

The Echo‘s Paul Gorst focused on Origi, saying he still has a future, despite a summer exit looking likely:

“It’s been quite the week for Belgian frontman Origi, too.

“After he breathed fresh life into his career in last week’s 3-2 win over AC Milan in the Champions League in his first start since January, here he was again, contributing decisively.

“Klopp freely admitted after the game that he expected his striker to leave the club in the summer, but here he is, still at the club, scoring, earning cheers from the fans.

“Few, if any, have enjoyed the sort of sporadic career arc that Origi has had since he officially became a Liverpool player in 2014, but his first goal in close to a year suggested there is still more to be written in this curious tale.”

It was a proud night for Kaide Gordon, who received praise after a lively debut…

Jones was impressed by the 16-year-old, tipping him for many more appearances in the future:

“For Kaide Gordon, this was surely the first of many.

“He could have been playing for the Under-18s against his former club at Kirkby on Tuesday night, but instead he was taking on experienced, seasoned professionals and looking entirely at home doing so.

‘A big talent, no doubt about that!; Klopp had said before kick-off.’He is a really good player, you will see that immediately.’

“He was right. Playing on the right of Liverpool’s attack – the space usually reserved for Mo Salah – Gordon’s quality was apparent from the word go.

“His touch is immaculate, his balance too, and for one so young, there is a pleasing appetite for the dirty side of the game too.”

This Is Anfield also hailed the young forward:

“Kaide Gordon impressed in pre-season and picked up where he left off – at senior level a least – right here.

“A debut at 16 is never to be taken lightly and never handed out without being deserved, and the hope will be this is the first of many.

“In flashes he was impressive; overall he didn’t let the team down or cost any big chances through a lack of tracking back or awareness.”

“Crikey, he looks about 16, you might have heard mentioned around Carrow Road on Tuesday night. That’s because he is, and Kaide Gordon displayed enough moments of class on his Liverpool debut to suggest Jurgen Klopp is on to a winner with this English teenager.

“At 16 years and 351 days, Gordon became the fifth-youngest player in Liverpool’s history, after Jerome Sinclair, Harvey Elliott, Jack Robinson and James Norris. He was not alone in making his first-team bow as he was joined by 18-year-olds Conor Bradley and Tyler Morton.

“The League Cup is apparently in a fight to remain relevant. Try telling that to this trio of teenagers. Takumi Minamino and Divock Origi got the goals but Klopp’s kids played their parts.

“Gordon in particular must have loved this occasion, playing the first half on the right wing directly in front of Liverpool’s travelling fans who were cheering every move he made.”

Kelleher also filled some column inches, not only because of his penalty save…

Freddie Keighly of the Mirror thought the goalkeeper’s all-round display was impressive:

“Whether it was surging out of his box to shut down danger behind a high defensive line or his crucial penalty save, Caoimhin Kelleher produced what was arguably his finest performance in a Liverpool shirt against Norwich City.

“The 22-year-old was equal to every effort which came his way, including Christos Tzolis’ tame penalty down the centre of the goal, which he managed to save with his feet despite diving to his right.

“The confidence of Liverpool No. 1 Alisson is clearly rubbing off on Kelleher, who also caught the eye with his brilliant sweeping.

“Twice the Republic of Ireland international made powerful headers to clear danger from outside his box, while he was not afraid to clean out his own teammates to clear the danger.”

This Is Anfield was similarly taken with the Irishman’s showing:

“Of course, there’s a nod to Caoimhin Kelleher for his penalty save, but also for his anticipation in clearing up plenty of balls in behind his defence, even outside his area.

“Both were pretty much flawless all night.

“It might be a bigger night for the ‘keeper: into double figures for Liverpool appearances and this one with a clean sheet in front of Ireland boss Stephen Kenny, who wants him playing more minutes.”