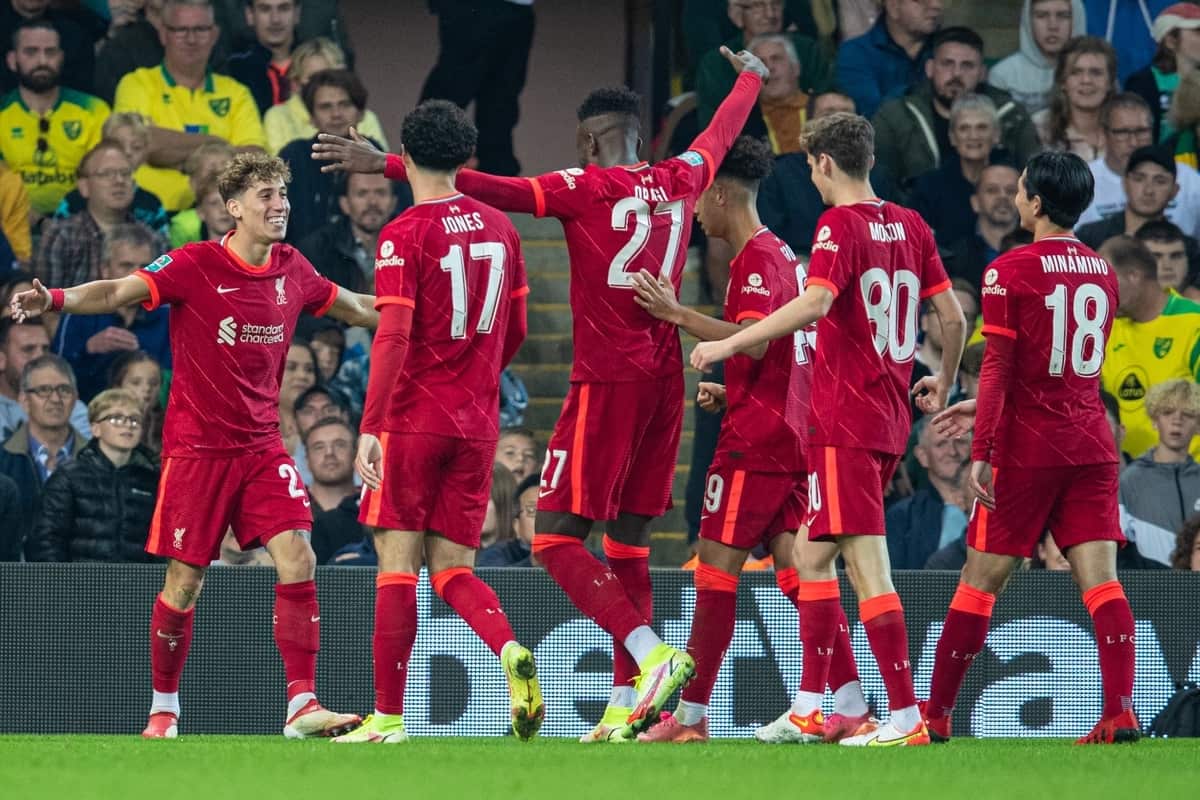 Liverpool cruised into the fourth round of the Carabao, League and EFL Cup with a pretty routine 3-0 win over Norwich, just like a few weeks ago, but different.

Kaide Gordon impressed in pre-season and picked up where he left off – at senior level a least – right here.

A debut at 16 is never to be taken lightly and never handed out without being deserved, and the hope will be this is the first of many.

In flashes he was impressive; overall he didn’t let the team down or cost any big chances through a lack of tracking back or awareness.

Conor Bradley debuted at right-back, meanwhile: a Mascherano-style debut for him in that his club bow comes after his senior international one.

Decent, aggressive, forward-thinking, quick to overlap; there was a penalty given away, too, a foul of the kind overly impetuous young defenders are prone to producing.

Nothing to worry about, plenty to admire.

Tyler Morton made his entrance at the break, into midfield for Naby Keita, and totally bossed it. Very encouraging all around for these three, the academy as a whole and Jurgen Klopp‘s future squad. 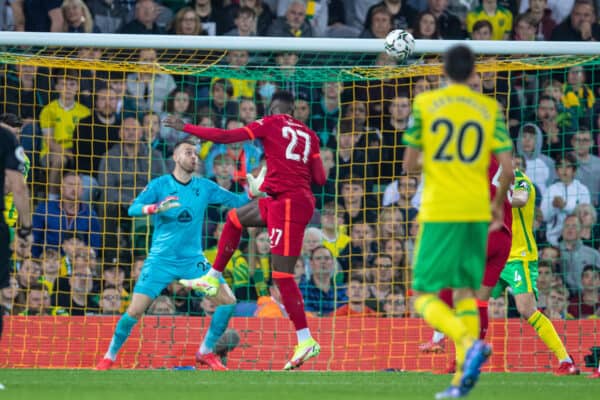 Three senior players started who would hope to feature more regularly and more relevantly in 2021/22 than they did last year: Ox, Taki and Divock.

The former, in midfield, had a poor first half and a decent second one. He hasn’t hit the ground running, but he did keep running, keep working, keep looking for the ball.

Origi was better in this game than any last season, effective in leading the line and linking play, notching a decent header and getting an assist of sorts for the opener.

Playing this way he’s a useful option against the lesser sides – the issue, as ever, is getting him to play this lively on a consistent basis, especially when his overall appearances are anything but consistently spaced out.

The standout was Taki Minamino, though.

Two well-taken goals, plundered from close range, showed both his intent to get into dangerous areas and his composure under pressure.

Elsewhere he was again hardworking, neat with his exchanges of passing, perfectly capable dropping into midfield or out to the left and rarely found wanting tracking back. 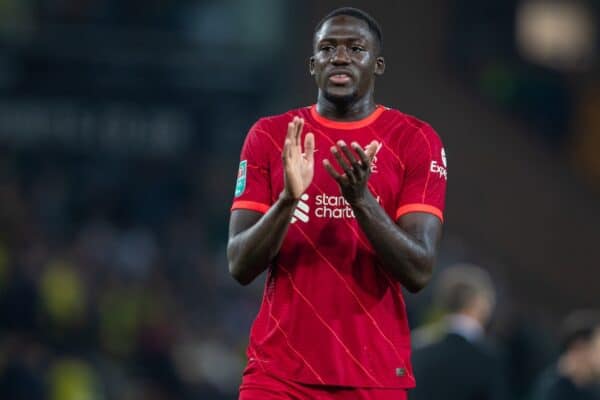 Liverpool appearances, hey? They’re like buses for Ibou Konate, who was waiting for his debut over a month and then got two in a few days.

Two clean sheets, too, even if our newest arrival was hardly tested too much this time.

It still feels more like a runout opportunity than a chance to truly stake his claim for a place in the side right now, which is fine – we’re suddenly well-stocked at centre-back after all.

Joe Gomez, captain for the night, was a steady presence, eager to step out and fulfil the Van Dijk role of winning back possession before it could become a danger to the team, though he did produce one or two rash challenges in doing so.

More steps for both players in attaining full fitness and fluidity in the side, which is the big positive.

Less so for Nat Phillips, an unused sub and clear fifth choice – hard to see him playing much if he doesn’t in the League Cup. 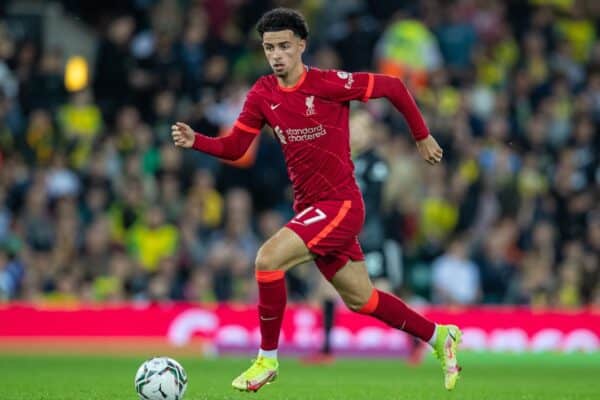 Curtis Jones made his 50th appearance in a Liverpool shirt; the only academy graduates who have played more times for the first team since Steven Gerrard’s debut are Jon Flanagan (51), Jay Spearing (55), Martin Kelly (62), Stephen Warnock (67) and Trent Alexander-Arnold (184 and counting).

Fairly safe to say he should get past all but one of those, with another very solid outing, this time as the deepest of Liverpool’s three midfielders – a role of real responsibility which he filled with both defensive tenacity and on-the-ball quality.

Of course, there’s a nod to Caoimhin Kelleher for his penalty save, but also for his anticipation in clearing up plenty of balls in behind his defence, even outside his area.

Both were pretty much flawless all night.

It might be a bigger night for the ‘keeper: into double figures for Liverpool appearances and this one with a clean sheet in front of Ireland boss Stephen Kenny, who wants him playing more minutes. 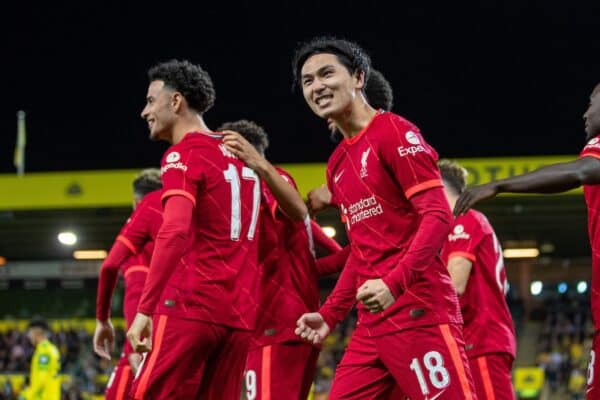 To Brentford! The Community Stadium awaits the Reds on Saturday evening – they smashed Oldham 7-0 in their tie while the Reds strolled to victory, so confidence will be high there, too.

That should prove our biggest domestic test of the season so far, Chelsea aside, and it won’t be a surprise to see the teamsheet show another glut of changes.

It’s non-stop action right now, with Porto in midweek and Man City to follow before the next international break interruption.

Getting there with three more wins in the bag would make it a spectacular start indeed – but first, it’s the Bees, who have most definitely already shown they carry much more of a Premier League sting than the Canaries do.