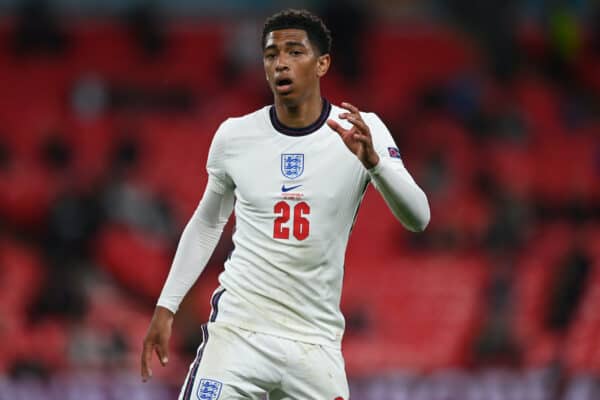 Following reports in England that Liverpool are considering a move for Dortmund midfielder Jude Bellingham next summer, sources in Germany have added to claims.

Bellingham is one of the most talked-about players when it comes to possible transfer targets at Anfield, having excelled since his £25 million move from Birmingham in 2020.

Only 18, he is now a regular for England and a first-choice starter at Dortmund, with a goal and three assists from five appearances so far this season.

The Times‘ Paul Joyce has explained that Liverpool are “expected to pursue him should he become available,” with “significant interest” among the Premier League as Man City, Man United and Chelsea are also suitors.

It is suggested, though, that Dortmund would be “reluctant” to sell due to the likely departure of Erling Haaland, who has a release clause in effect from 2022.

Given Liverpool’s slow transfer window in the summer just gone, the news of interest in Bellingham was met with apathy from many fans, with low expectations of any deal coming to fruition.

But SPORT1 reporter Patrick Berger has corroborated claims of the Reds’ pursuit, writing that Jurgen Klopp is “monitoring the midfielder for a potential transfer next summer.”

In a report for the German outlet, Berger adds that Liverpool are “one of many interested parties,” though Dortmund have “basically no plans” to negotiate a sale.

Bellingham is under contract until 2025, which puts his club in an “advantageous position,” particularly with the player “happy in Dortmund.”

The price touted for Bellingham is £80 million, though any starting role at the World Cup next year is expected to increase his value and his possible wage demands.