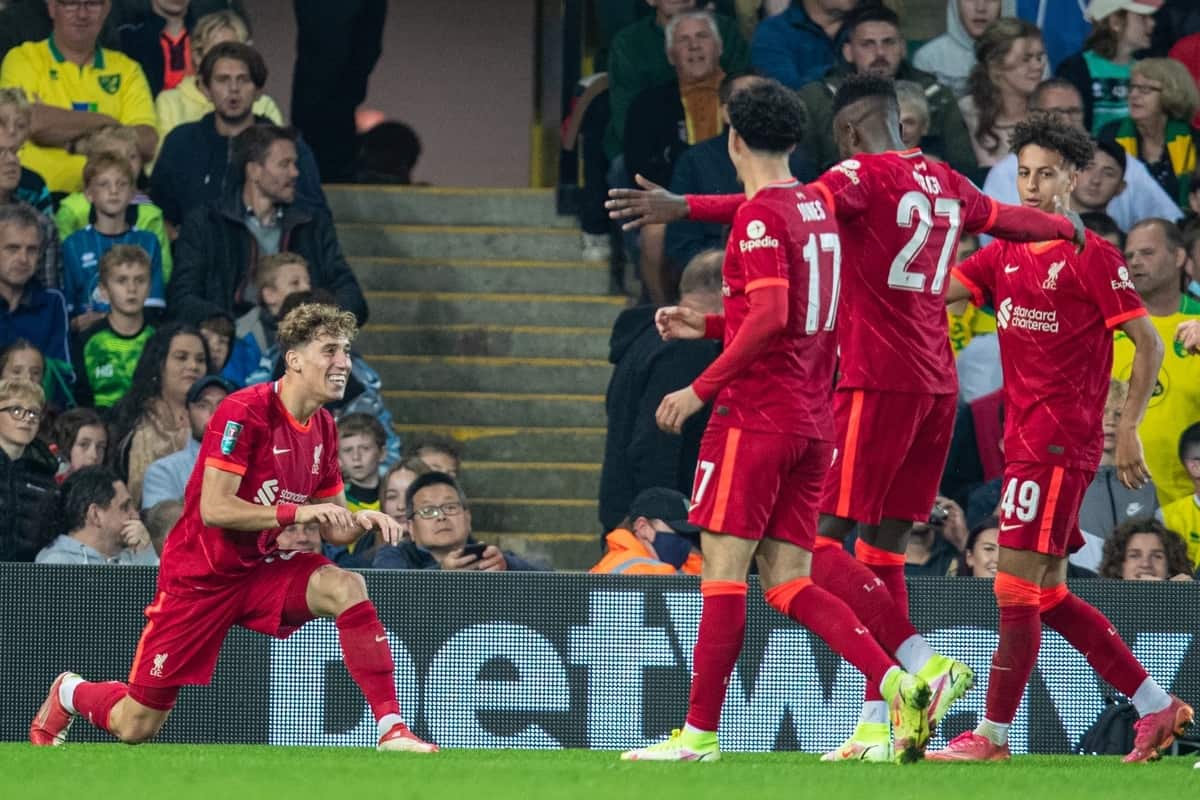 A much-changed Liverpool side cruised to victory over Norwich in the League Cup on a night where three teenagers made their debut to seal the Reds’ place in the fourth round.

The seventh game of the season in a third different competition for the Reds saw them take in the familiar surroundings of Carrow Road, with a place in the fourth round on the line.

And it was Takumi Minamino who got Liverpool off to a flyer, reacting the quickest to find the net for his first goal since December 2020.

Caoimhin Kelleher would be the next in line to have say on proceedings, brilliantly denying Tzolis with his feet from the penalty spot.

The lead would be doubled soon after half-time thanks to a Divock Origi header before Minamino notched his second thanks to some lovely movement tight in the box.

It would mean the night ended on celebratory terms, one three teenagers will never forget as Kaide Gordon, Conor Bradley and Tyler Morton all made their debut.

Another three goals and a clean sheet. Becoming a bit of a habit.

Pretty perfect night for Liverpool, that; a win, a good display, goalkeeper saves a penalty, two of the front three score and the club’s toddlers get to run around for a bit. Lovely stuff.

Conor Bradley, Kaide Gordon and Tyler Morton all showed they could have big futures at #LFC tonight. But, in the short term, those goals from Takumi Minamino and Divock Origi might be more important. It would be hugely helpful to this season’s trophy push if they can contribute.

Pretty much everything you could want from tonight. Gordon and Morton superb, Bradley with some bright moments and Minamino, Tsimikas, Origi and Jones all sharp.

Great might for the young Reds, Kelleher, Gordon, Morton who was excellent, but also Bradley whose head didn't go down, he stuck at it. Future looks bright. Jones continues to impress too

Now consider that they’ll likely be used one or two at a time in a more settled XI — as opposed to a completely unfamiliar group — and there’s a lot to believe in.

So many positives. Up the reds ?

And both Origi and Minamino made an impression…

Divock Origi looked fed up and disillusioned last season; now he’s full of desire and playing well. Fascinating to know what’s changed given his status at the club has not changed – still not part of Klopp’s long-terms plans and would’ve gone in summer had right offer come in.

Everyone talking about Origi, but it’s Taki that’s making a statement tonight.

You can rightly question the standard of opposition he’s faced at times, but Minamino has six goals and two assists in 836 minutes for Liverpool since the start of last season. Couldn’t have done too much more with the opportunities he’s had. pic.twitter.com/iE6EMKRcEt

Can't decide whether Taki is the 2nd or 3rd best finisher in the #LFC squad. that was ?

Divock Origi only exists for third round League Cup ties and massive Champions League games against European giants. There is no middle ground.

Going to be cautiously optimistic about Minamino and Origi tonight.

Thought both did really well – we now need them to do this consistently in the league and not just in the odd cup game once or two a year.

Minamino, in particular, has such natural quality.

The kids are more than alright…

Really enjoying watching Liverpool's young players on show tonight. Morton so composed since coming on and can't get my head over Kaide Gordon's performance at 16 years old! Exciting futures ahead https://t.co/LynYwsZRPk

Kaide Gordon has looked fantastic tonight, playing with a lot of confidence. Got a bright future ahead of him #LFC

“Morton is the real deal.”

Watch Tyler Morton. He’s like a veteran out there. Composed on the ball while pointing and organising when not in possession. Confident kid.

Anyone who has watched the #LFC Academy will not be surprised by the performances of Bradley, Gordon and Morton this evening.

It remains a welcome sight to see depth at left-back…

Kostas Tsimikas has a better delivery than Father Christmas.

Kostas Tsimikas is an outlet. Involved in six goals already this season:

“Tsimikas’s delivery has been a joy to watch.”

– DanKalion in the TIA comments.

Kostas has a wand of a left foot. Wonderful

And the threat from set pieces was rightly noted…

Last season they scored eight in their first 23, then went 20 games without one.

Great that Liverpool are masters at scoring from set pieces again isn’t it?

Another Tsimikas corner. Another goal for Liverpool.

“We are becoming set-piece monsters now! Last 4 goals scored off of it!”

– Abyss in the TIA comments.

Liverpool's 5th straight goal scored on the second ball from a corner in all competitions. Surely approaching the record for that. #LFC

LFC from set pieces this year ???