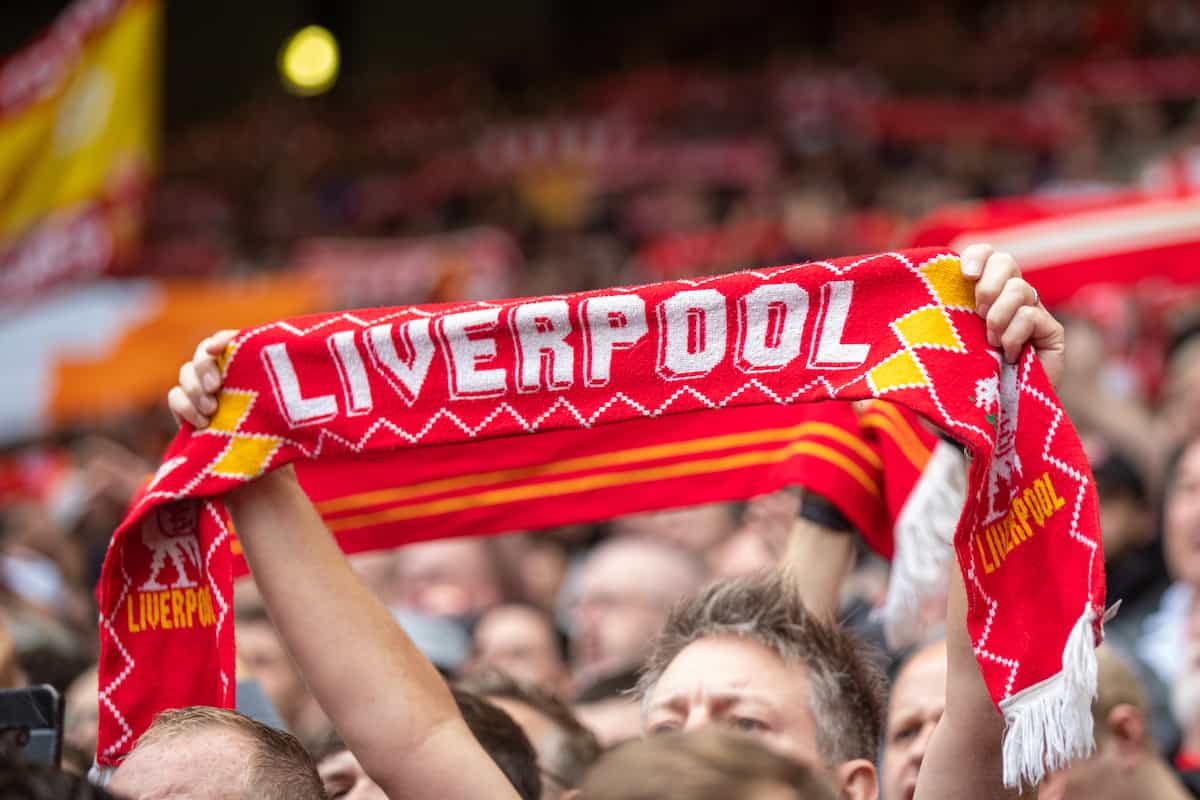 Premier League clubs will have permission for safe standing trials from January 1, with Liverpool one of a number of clubs anticipated to be invited to take part.

Anfield is currently one of eight Premier League stadiums to have rail seating in place for the 2021/22 season, with the installation part of a 12-month trial period.

Approximately 1,800 rail seats are installed in the Kop presently with plans for a further 6,000 in the lower Anfield Road End, with Anfield still very much an all-seater stadium.

But safe standing trials from January 1 have now been given the green light with the Sports Ground Safety Authority presiding over the plans for the Premier League and Championship.

Clubs must first apply to be part of the programme before its implementation from New Year’s Day until the end of the season, with standing to be sanctioned for the first time in more than 25 years.

It comes a number of years after the Labour Party started their campaign to make a push for change alongside football supporters.

And the recent announcement was backed by Reds and fans across football, with it a “long time coming” for some:

Brilliant news. Standing was happening week in week out at grounds all over the country anyway. Moving towards it being safe and legal to do so has been a long time coming. https://t.co/nSkU7BMAVW

“Brilliant news and can’t wait to see this implemented at Anfield..”

Good to see Premier League clubs asked for expressions of interest to pilot safe standing areas this season. As someone who used to stand on the terraces in the 1980s experiencing good & very bad I do think it is finally time for clubs inc Arsenal to introduce safe standing areas

A real step forward for improving atmospheres, boosting safety, combating persistent standing and listening to what supporters want, which is a choice of options when attending a match. https://t.co/NINh16NnSU

This is great news. Was on the main three parties' GE19 manifestos.

Fans should be able to stand at the football. Safe standing is far, far safer than what currently goes on. https://t.co/O0I8JDmRko

The safe standing at Molineux is excellent. About time it was formally allowed (rather than it being "officially a seated area, but stand if you want") #wwfc https://t.co/FrgRlWkeaI

Such a pivotal moment in post-pandemic football: the first of many anti-fan symbols to be removed. Fairness re travel restrictions, lifting of alcohol ban in Scotland & some pricing challenges to be achieved next https://t.co/v2FGo5jiPA

Good news. Quite apart from the debate about atmosphere, there's so much persistent standing at most grounds. (Much more than when seating was first introduced, I'd say.) MUCH safer to stand in safe-standing conditions than in regular seating https://t.co/ew9Q7ASr1K

? Congratulations to all the campaigners who have worked so hard to make this happen
? I’ll be happily in my seat but I’m pleased that those who want to stand at Spurs can and that we have the infrastructure to support it #COYS https://t.co/HAvsTASZBP

I looked in to safe standing and rail seating about 10 years back for a blog I had at the time (since deleted the whole thing ?????).

This is brilliant progress. Many clubs have already got these sections ready to go and I'd imagine many others will follow suit. It's a no brainier. https://t.co/cV72Ww9uU7

Great news and long overdue. Applies to away sections too, not just home ones. https://t.co/3DhJ9phwr0

Good news. So 'Rail Seating' will become 'Safe Standing' from January then. Time to get every single away end converted as a starting point. https://t.co/jDNONrsdpn

Safe standing trials are a massive step forward. And in my opinion, LFC should be at the forefront, leading the way to make standing at football safe. That’s the best legacy you can have from Hillsborough.

It goes without saying, but capacity would not increase with the move with the number of seats remaining constant within the relevant safety measures to allow fans the right to stand.

It’s a momentous move and with fans regularly standing throughout games in environments not safe to do so, it is a sensible move.

But whether Liverpool take up the option for the upcoming trial remains to be seen after introducing some rail-seating at the start of the season.