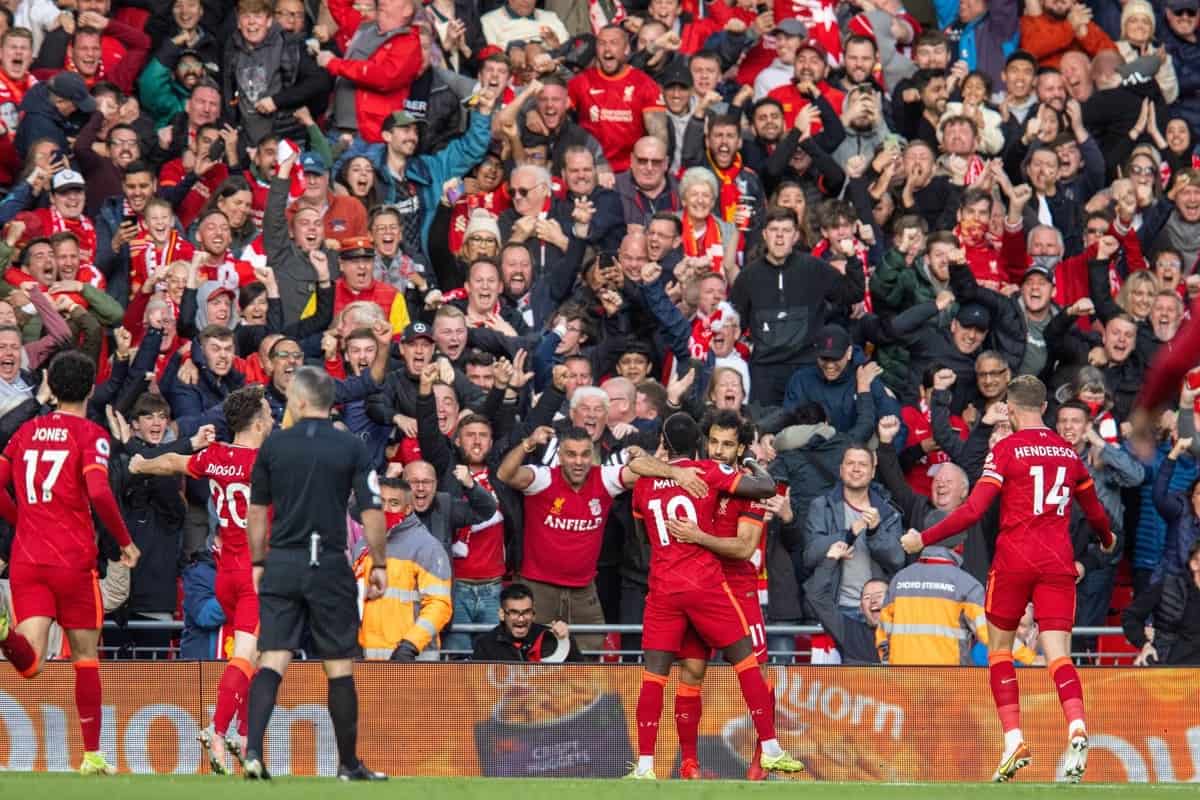 Liverpool were pulled into an almighty fight at Anfield and twice saw their lead pegged back against Man City, with a 2-2 draw widely deemed as a fair result by fans.

The enormity of the fixture was not lost on many, but Liverpool were fortunate not to go into halftime at least one goal behind thanks to a sloppy and lacklustre opening 45.

Jurgen Klopp’s men looked to have started the better of the two teams, pressing high and forcing early mistakes but they soon tired and there was little resistance in midfield as City pushed forward.

The break offered a time to reset and Mohamed Salah and Sadio Mane injected life into the game, with the No. 10 opening the scoring in fine fashion.

Phil Foden would equalise with it all too easy for City to transition from right to left, only for Salah to again pop up with an early contender for goal of the season to restore the Reds’ lead.

But a deflected Kevin De Bruyne effort would again peg Liverpool back, with the spoils shared to keep Klopp’s side unbeaten heading into the October international break.

Salah continues to surprise in all the best ways…

That goal was so good I’m on the verge of tears. That was the goal of the season so far.

Mohamed Salah is probably the best player on the planet *right now*. #lfc

Fitting to see Mo Salah adding so much to his own legendary status on the day we remember the great Sir Roger Hunt,

“It’s really hard to deny that Salah is the best in the world currently.”

– Ian Botti in the TIA comments.

That's absolutely sensational. A piece of awe-inspiring brilliance from Mohamed Salah. The best player on the planet on current form.

Mohamed Salah is the most in-form player in the world right now. The most complete he’s ever been. I’ve said it for weeks and he continues to prove it each game. Phenomenal player.

Electric match, England’s two best sides without a shadow of a doubt. Shouldn’t be conceding quick-fire goals like that after going ahead. Salah… give him what he wants, get it done. #LFCdigest

On balance, it was a “fair” result for Liverpool…

Felt a fair result that, especially after being nowhere near the level needed first half. #LIVMCI

Full time 2-2. Think most Liverpool fans would have taken a point at half time but maybe less so on that second half showing. Liverpool still unbeaten this season, the only team in the PL to be so, now for the international break.

Fair result. Lucky to not be down to 10. Mo deserved a winner for that goal. Midfield wasn't at the races.

Exhausted. Painful not to win after *that* Salah goal and the Fabinho moment, but hard to argue it's not a fair result over the 90 mins. Still unbeaten with home advantage in the PL since April 2017.

Such a weird game this. We haven't been great at all, but still disappointed not to come out with the 3 points.

Absolute privilege to watch that second half of football by the best two teams in the league. Liverpool not at their best today so take the point and run.

Fabinho and Henderson won’t want to see the game back in a hurry.

Fair result overall. Such a pity 2nd City goal came off such a huge deflection.

The performance showed the importance of Trent…

Liverpool really miss Alexander-Arnold in a game like this. Can create something out of nothing. Sure Thiago would have helped with ball retention as well.

Those triangles between Milner-Henderson-Salah are a great advert for Trent Alexander-Arnold.

#LFC getting completely penned in by Manchester City and fortunate not to be behind. Badly missing Alexander-Arnold’s passes through the lines and Jota nowhere near as adept at finding pockets of space as Firmino.

If this game so far doesn't show you the importance of Trent Alexander Arnold…then you never will get it.

And there’s plenty to improve defensively after the break…

“What’s up with the defending of late? It’s been horrendous at best. One pass and the defence collapse, man marking absent, this just isn’t good enough.”

– Hoxtygen in the TIA comments.

You don’t leave KDB unmarked on the edge of the D, and if you do, that happens. Slice of luck with the deflection but don’t give him the opportunity to get some luck in the first place. Too easy again. #LIVMCI

Trent and Thiago back after the international break pls ?

What a game. 2nd half thought we were brilliant, Salah magnificent. Ultimately should have hung on after going 2-1 up and hope that doesn't come back to bite us. But long way to go and we're right in it.