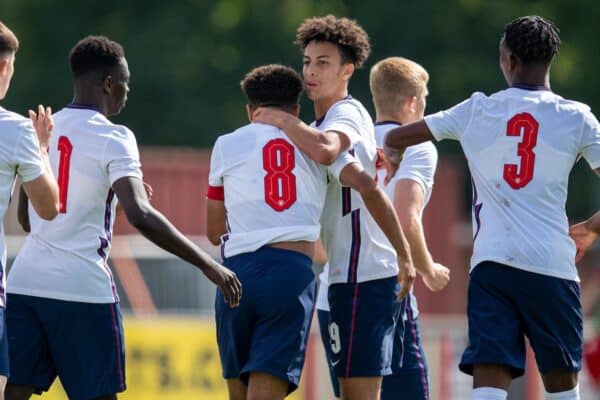 Academy standouts Kaide Gordon and Oakley Cannonier are among nine Liverpool players to receive England call-ups through the age groups, stepping up impressively.

This weekend brings the final domestic games before the second international break of the campaign, with the first team taking on Man City at Anfield.

It will be another busy break for the Reds, again clouded by the need for players to quarantine upon their return – regardless of the exemption of those fully vaccinated – but for those called up, it will hopefully be a positive one.

England take on Andorra and Hungary in two World Cup qualifiers, with Jordan Henderson the only Liverpool player in Gareth Southgate’s squad.

With Trent Alexander-Arnold out injured and both Joe Gomez and Alex Oxlade-Chamberlain short of game time, Henderson was deemed the sole Anfield representative worthy of a place in the group.

However, eight others have been included in the youth ranks, including another call-up for Curtis Jones as part of Lee Carsley’s under-21s.

Leighton Clarkson keeps his place in the under-20s group, while four Liverpool youngsters are involved with the under-19s – with Gordon joined by Harvey Davies, Luke Chambers and James Norris.

For 16-year-old Gordon, it is the first time he is with the England U19s, having only received his first call-up to the under-18s squad for the September break.

Taking his place for the U18s, then, is another first-timer in Liverpool striker Cannonier, who struck 11 times in his first seven games with the Reds’ under-18s this season.

Young full-back Josh Davidson is with the England under-17s, as he continues to make a strong impression in his first season in Bridge-Wilkinson’s squad.

It could be a productive international break for Gordon in particular, with the U19s heading to Marbella for three friendlies against their counterparts from France, Mexico and Belgium.

After making his debut for the Liverpool first team in the 3-0 win over Norwich in the League Cup, the club have taken a cautious approach with Gordon as he sat out a handful of games.

But England cannot ignore his progress, as he makes great strides as a young player destined for the top.