Alisson and Fabinho both added 90 minutes to the bank for Brazil in their latest victory, with it only the third time Liverpool’s No. 3 has done so for his country since 2019.

There’s been no shortage of coverage for Brazil in the last few months following the tug of war between the Brazilian FA, Premier League clubs and the players.

But they were finally able to let their football do the talking with their Premier League players at their disposal, with Tite selecting four in his starting XI against Venezuela.

Alisson and Fabinho both got the nod, with Liverpool’s No. 1 selected ahead of Man City‘s Ederson and Palmeiras’ Weverton, while the latter settled next to Gerson in a midfield four.

There would be no clean sheet for as Eric Ramirez headed the ball into the net having taken advantage of both and Marquinhos slipping at the crucial moment.

United’s Raphinha, readily linked to Liverpool, turned the game in Brazil’s favour after being introduced at half-time, providing the assist for Marquinhos’ equaliser in the 71st-minute. 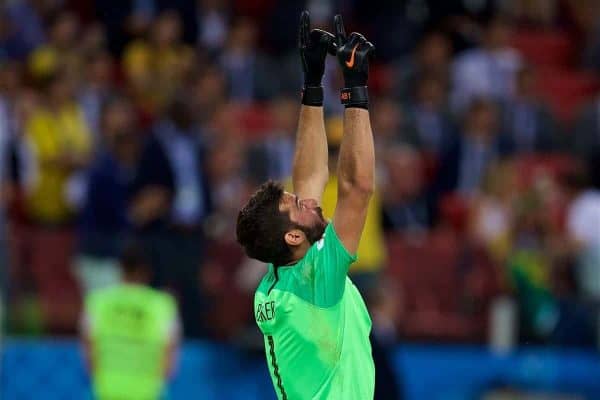 A second assist would come moments before the full-time whistle to set up Antony from close-range to seal a 3-1 win after Gabriel Barbosa converted from the penalty spot 10 minutes prior.

The result extends Brazil’s lead in the World Cup qualifying group to eight points after nine games, with Colombia and Uruguay next up during the break.

The Liverpool duo will see out all three games after Tite emphatically quashed any hopes of an early departure to be able to feature at Watford.

And with both Venezuela and Colombia remaining on the UK red list, it could be that Liverpool send the pair straight to Spain in order to feature against Atletico.

Elsewhere, Takumi Minamino received 59 valuable minutes of action for Japan and he had taken to the bench prior to Saudi Arabia scoring the only goal in their World Cup qualifier.

Minamino had forced goalkeeper Mohammed Al-Owais into a number of saves during his time on the pitch but was expertly denied.

The result leaves Japan with only three points after three games in Group B, keeping them behind Saudi Arabia and Australia in qualification.

Mohamed Salah, Virgil van Dijk and Neco Williams, meanwhile, could all be in action on Friday as the international action continues.