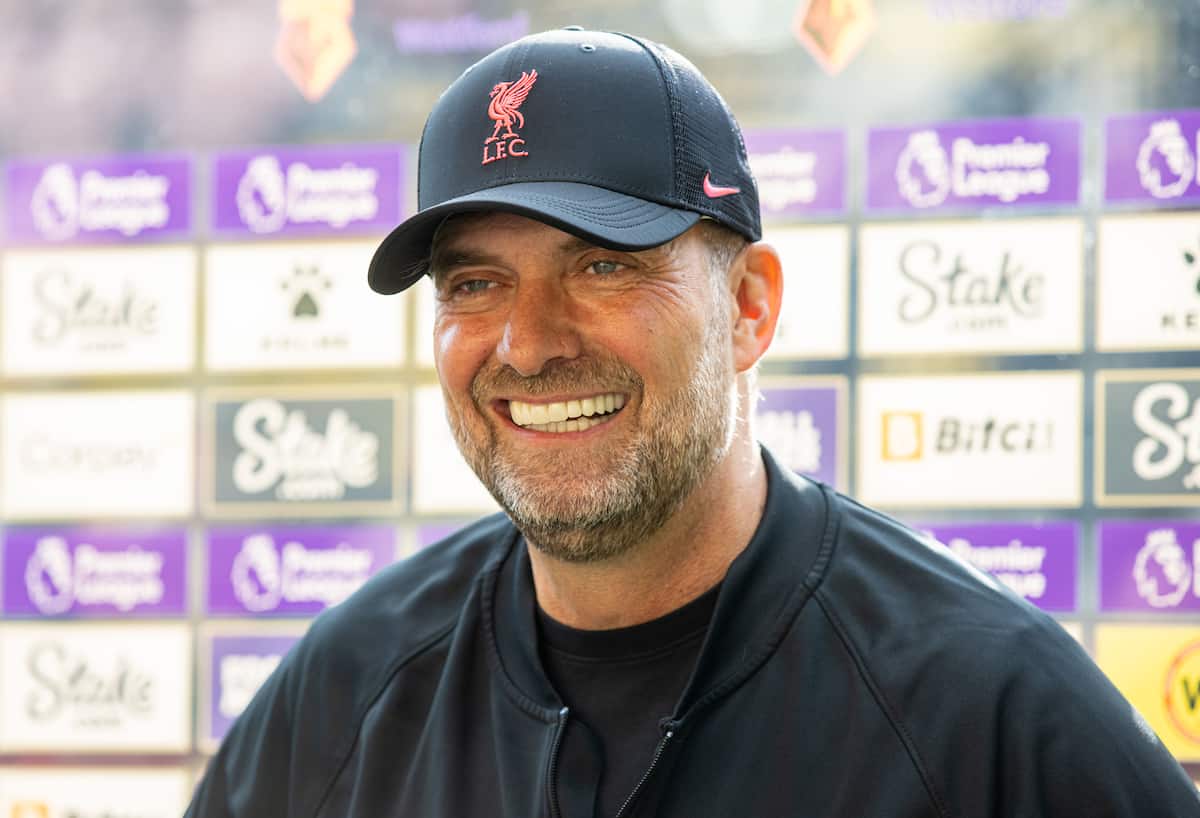 Mohamed Salah was the topic of choice after Liverpool’s 5-0 win at Watford, with Jurgen Klopp more than happy to eulogise over his world-class No. 11.

Here are the key points from Klopp’s post-match press conference at Vicarage Road:

We were truly witnessing greatness each and every week and Salah was back at it against Watford.

He again was talked of in the same sentence as Lionel Messi and Cristiano Ronaldo, but the manager was quick to say “He looks like Mo, actually!” when a Messi comparison was made.

“He’s in good shape. The three goals of Bobby really nice, 100 Premier League goals for Sadio so all these nice little stories.

“But we cannot overlook the performance of Mo today. I said it after the game, cut the goal off and it was an outstanding performance. That’s important for us and that’s why we win football games.

“The goal was very special but if you go back a little bit you may find the goal against Watford at home looked pretty similar to this one, he is obviously a player who can do these things. Good for us.”

Reds have been spoilt by choice with Salah’s goals for the club and his last two alone have simply been out of this world, masterfully working the ball to his will.

The exploitation of the space, or lack thereof, has been that standout and the choice between Saturday’s goal and his strike against Man City was an impossible one. You can’t blame him.

“Should I compare two world-class goals,” the boss laughed. “I like them both!”

“Obviously different goals, the other was slightly more dynamic and bigger space and here it is not possible for people with normal feet, like all of us, but it’s obviously possible for him and that makes it absolutely special.

“You can see how the team celebrated the goal that everybody realised immediately it was something special.”

3. It’s clear who is the best in the world

The game is not short of world-class operators but there can be no denying Salah’s current standing in the list.

“He is for sure one of the best in the world now,” Klopp said. If you asked me who is the best, for me he is the best.

“I see him every day that makes it easier for me but there are Lewandowski out there and Ronaldo still scoring like crazy, Messi still putting out performances at a world-class level, Mbappe and all these.

And the scary thought for the opposition is, as Klopp said: “There’s still a lot to come from him.”

While his fellow forward dominates the headlines, Sadio Mane was also worthy of praise for his role against Watford and the opener which was his 100th goal in the Premier League.

A special milestone for a player who is “world-class” in his own right.

“I’m not sure he scored penalties for Southampton, but not that I know, soo 100 goals without a penalty and that makes a difference.

“A special number and should be and will be proud of that. It doesn’t happen for a lot of players but you don’t have to talk about Sadio’s quality, he is a world-class player as well.

“Big day for him, really happy for him.”

Unbeaten and all three forwards on the scoresheet, it was a brilliant day indeed for Liverpool.