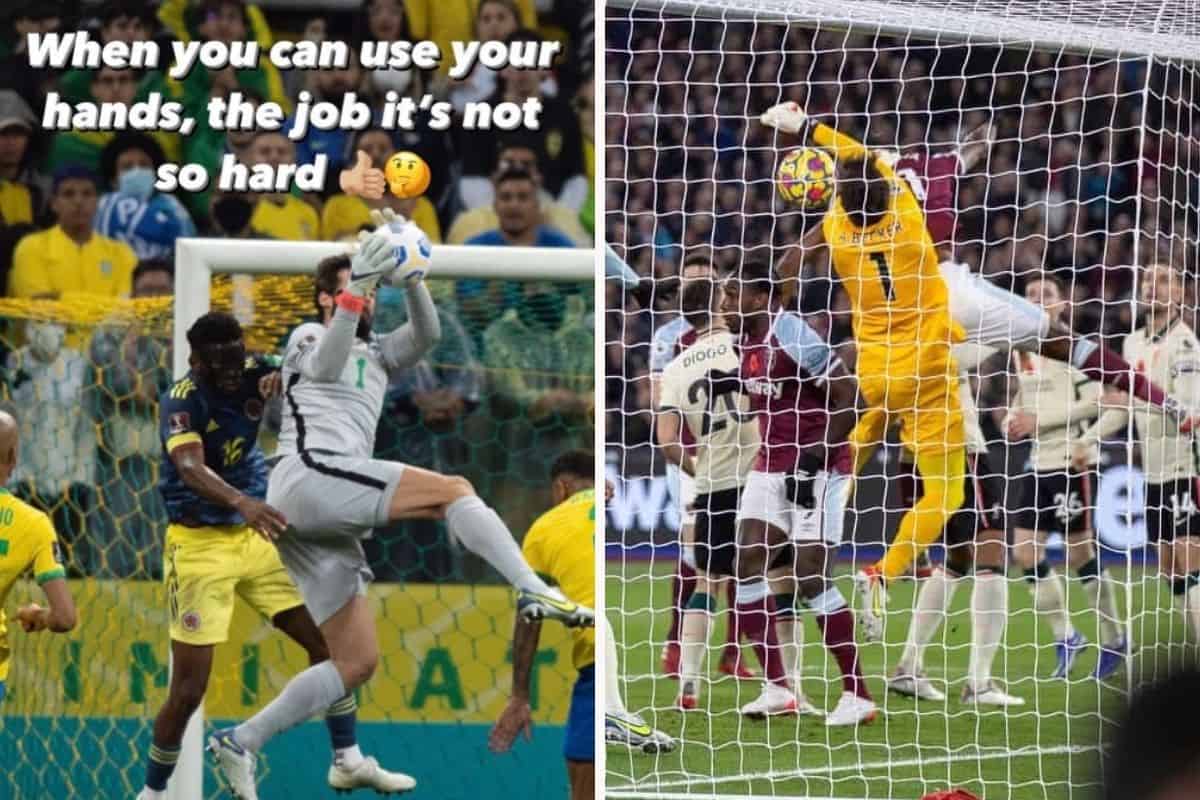 Alisson has made it clear as to what he made of the rulings in the defeat against West Ham last time out as he took to social media following his involvement with Brazil.

Liverpool’s No. 1 was the focus of much of the post-match conjecture at the London Stadium, with his performance heavily scrutinised in the 3-2 defeat that ended Liverpool’s unbeaten run.

The first flashpoint arrived in just the fourth minute with Alisson penned behind Angelo Ogbonna, who made it so the Brazilian did not have a clean run at the ball.

The double team with Michail Antonio formed part of the Hammers’ plan, which was “to stick it on the goalkeeper and just challenge basically,” and there would be no protection from the referee.

Jurgen Klopp questioned “how can it not be” a foul on Alisson and now the No. 1 has sent out a not so subtle message to the officials alongside an image from his involvement with Brazil.

Pictured in the air with the ball in his grasp, Alisson penned a message that said: “When you can use your hands, the job it’s not so hard.”

Alisson with a little dig at Craig Pawson and Stuart Attwell here…? pic.twitter.com/YlXIwc6vra

One does not need to read between the lines with that one. Not even Craig Pawson who was, of course, the on-field referee and Stuart Attwell, who was in charge of VAR.

It was a decision that divided many with some viewing the incident as one that needed Alisson to show greater strength and others feeling he was impeded by not having the ability to be able to use both arms.

“In the situation when you see the dynamic of the whole situation, when they all go down, how close they are, how can that not be a foul already without pushing the arm of Alisson away?” Klopp said after the fact.

“The ref made it easy for himself and thought ‘come on, let’s see what the VAR is saying’, the VAR had a look and said ‘not clear and obvious’. I don’t know why.

“And here’s the goal, which is really strange.”

We’ve seen softer free kicks given to goalkeepers in the past and as Virgil van Dijk went on to say: “With the rules, no one knows what is allowed.”