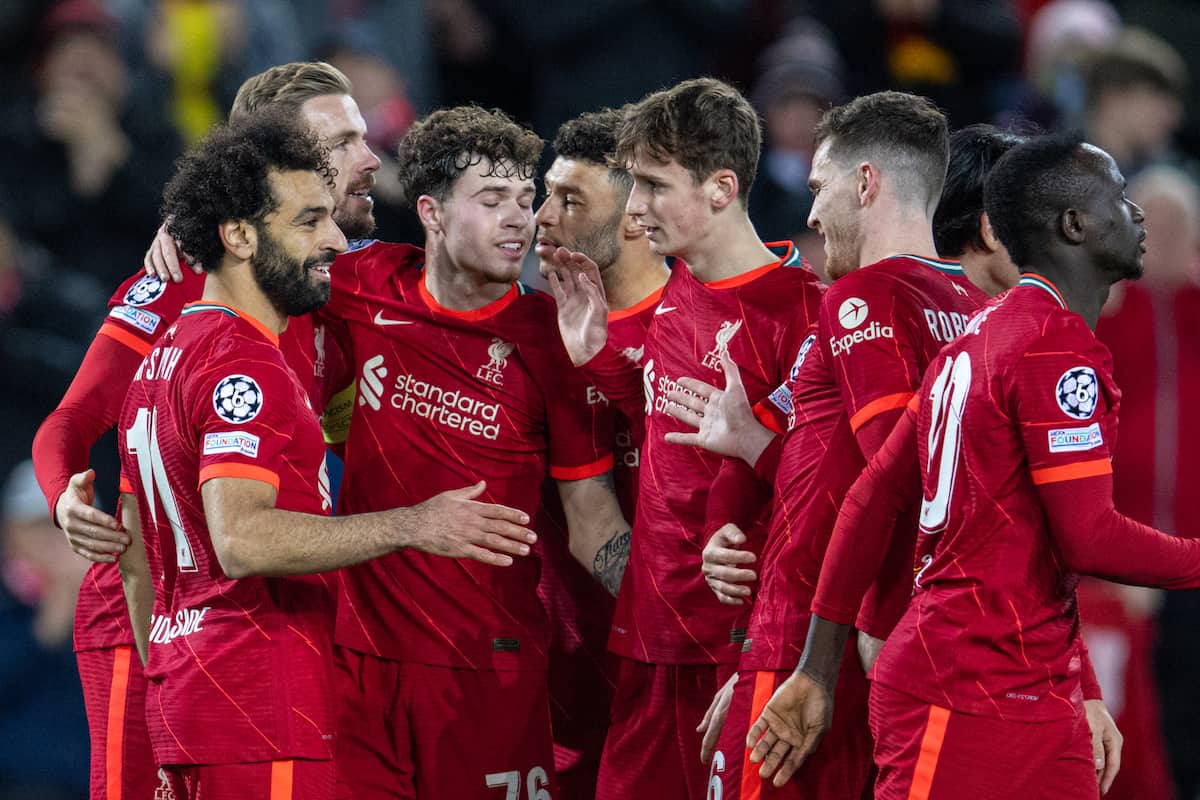 The visit of Porto, on paper, was a dead rubber. But for Liverpool, it was another valuable opportunity for regeneration, integration and formative steps, writes Steven Scragg.

Wednesday evening offered a conundrum for Liverpool and Jurgen Klopp. A game that had no structural meaning to their Champions League fortunes moving forward in this season’s competition, but one which threw up the challenge of maintaining momentum and stretching the leg muscles of a few players who have needed more time on the pitch.

For some members of the lineup named by Klopp, this one was all about continued regeneration, further integration and formative steps forward. For others, it was just football for the sake of it; football for the sheer love and joy of it.

In the case of the latter instance, why else would you pitch Mohamed Salah and Sadio Mane into a cold November night when an injury to either would be immeasurably more costly than losing out on a few monetary crumbs that UEFA have brushed from their gold-plated beard?

Mo and Sadio love doing mad things with an inflated size five orb though, so they will not have questioned the wisdom of their involvement. I’m certainly glad they played, as it warmed the soul, while the body felt the chill. 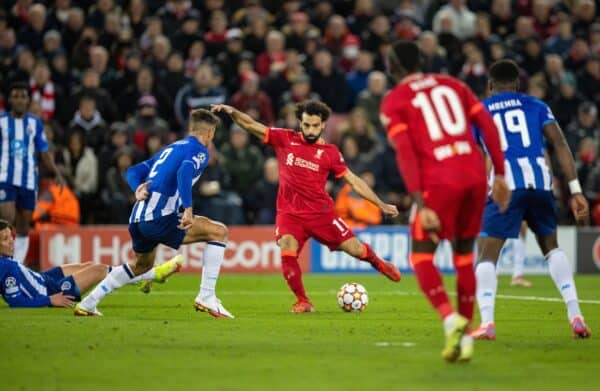 For the rest, there was a sense of growth for many, if not most of them. Alisson Becker being handed the captaincy, on a night when he was unlikely to be kept too busy by the opposition, was an act of genius. This was a gesture from Klopp that will have added another 30 percent grizzly bear to the Brazilian’s overall game for years to come.

Ibrahima Konate getting another 90 minutes under his belt was another plus. The man is shaping up to be an absolute monster of a central defender. There is an element to him that convinces you that he could literally go chest-to-chest with multiple brick walls and still leave them in a pitiful crumpled heap, laughing all the way as he does so. This is where integration came into play.

It was also good to see that Konate can work reasonably effortlessly alongside Joel Matip, which facilitates a relaxing of anxieties over any potential absence of Virgil van Dijk, who was able to kick back and watch the game unfold from the sidelines, resting up before facing his former employers on Saturday. 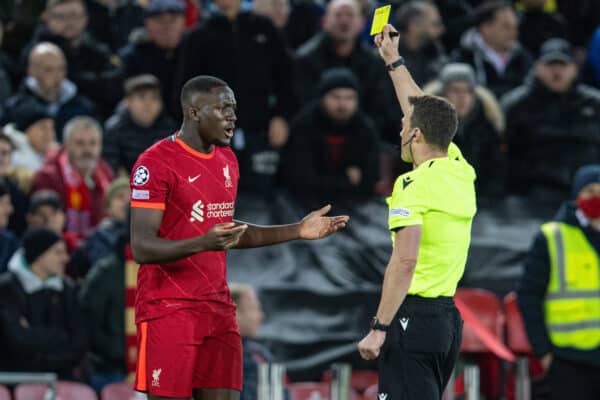 Neco Williams offered another bonus, putting in one of his best performances in a Liverpool shirt. He could never possibly be Trent Alexander-Arnold, nobody could, but it is becoming more apparent that he models himself as a right-sided Andy Robertson. Committed, industrious, comfortable on the ball and not shy of weighing in here and there.

Williams just needs to keep working on his concentration to eliminate those occasional glaring errors. They are becoming less frequent and his regular involvement with a Wales national team that is on the crest of a wave is undeniably helping. It is mad to think he has played more career international games, 17, than he has league appearances, 13, at club level.

Added to this, it was good to see Robertson back on the pitch with a timely return. We’ve all been impressed with the rise of Kostas Tsimikas, a player who has improved massively on his limited showings of last season when he looked hugely out of his depth. His levels seemed to subtly dip in this one and maybe a rest is needed before the avalanche of games to come in December.

It all works to swell Liverpool’s defensive options, in more realistic terms, as it was only a short few months ago that we were combating a central defensive crisis and both Williams and Tsimikas were on the receiving end of increasingly incendiary criticism whenever called upon at full-back. This is where regeneration came into play.

Williams and Tsimikas aren’t the only ones to have worked on regenerating their Liverpool careers either. In midfield, Alex Oxlade-Chamberlain has been handed the opportunity to lift himself from what had appeared to be a state of stagnation that left him a contender for the next player through the exit door.

Having arguably taken up the Adam Lallana role in Klopp’s squad, Oxlade-Chamberlain had become something of an afterthought, where any appearance had started to be met with an indifferent shrug from the Anfield congregation, often viewed as a symptom of a spate of injuries to others.

Left behind within a fug of his own injury problems and the form and evolvement of other rivals for a place in the team, this is sink or swim territory for Oxlade-Chamberlain, and so far, he has opted to swim. His recent performances have been magnificently consistent, a proponent of doing the basics extremely well and heads have started to turn, both on the touchline and in the stands. The task for him is to stay fit, which is easier said than done for any Liverpool midfielder. 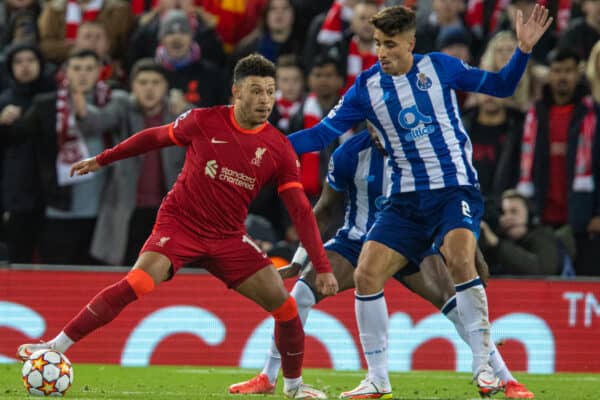 Rich promise and high hopes of cementing a long-term run in the side has slipped through the fingers of Harvey Elliott, Curtis Jones and Naby Keita in the first third of the campaign, while Jordan Henderson, Fabinho, Milner, and Thiago have all had absences of their own.

This within the shadow of Gini Wijnaldum’s departure in the summer has made midfield Klopp’s most complex of conundrums to crack, something that has always arguably been the case. An ever-revolving engine room, it is as if there is an ever-open vacancy for somebody to become the alpha figure.

Yes, Henderson is as close as we get, yet for a man that can wear an array of different midfield roles adeptly, as indispensable as it makes him, it also means that he can never truly be compartmentalised as the perpetuating anchor of the midfield. Henderson shape-shifts majestically while Fabinho is the foundation. Yet, we still all hold out for an all-encompassing visionary, a hero.

The arrival of Thiago was meant to fill that void and he intermittently has, but minor niggling injuries have littered his career and will continue to do so. Therefore, we hold so much hope in the whimsical nature of Jones and can never quite find the strength of decisiveness to admit defeat with Keita, a player with such talents that it would be intolerable to see him find a run of fitness within the colours of another club.

We’ve invested too much time in Keita to give up now, yet can we seriously see a dramatic change to the way he is so phenomenally doomed to offer us only mirages of the player he could have been?

But we got to see the very best of Thiago on Wednesday night. A masterclass of a performance, his range of passing was breathtaking and his goal was worth the admission fee alone. His presence must have been priceless to Tyler Morton.

For the best part of an hour, Morton was able to stick to working on measured positioning, sat in front of a largely untroubled back four, he was a pedestrian for much of the time, in the best possible manner. He pointed more than he touched the ball as if an incredulous witness to the greatness of Thiago and the endeavour of Oxlade-Chamberlain. 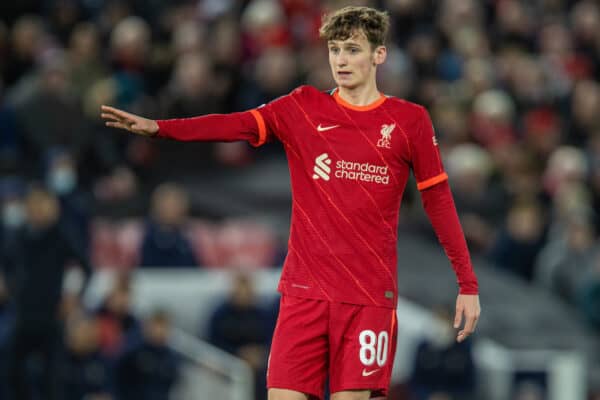 A conductor of sorts, Morton was very much like one of those people who do dog agility, moving into space, pointing out which obstacle the ball needed to navigate next as it swept through the tunnel and then belted its way over the see-saw.

For the last half hour, Morton took a more progressive role, especially after the introduction of Fabinho. It was an intelligent performance and one he was guided through by the perfect midfield colleagues. There is potential at play.

In many respects, in the front three, as the meat in the Salah and Mane sandwich, Takumi Minamino encountered a similar evening. He dropped off, he switched out, he made himself the selfless attacking figure.

What marks the difference between Morton and Minamino’s nights, however, is that the latter is a man who isn’t making those tentative steps into professional football, he is a man that now needs to be grasping the opportunities when they do arise. He needs to be making a significant impact now if he is ever to be a compelling alternative to Bobby Firmino or Diogo Jota.

The hope was, after his goal against Arsenal on Saturday, Minamino would seize the evening against an at times antagonistic FC Porto, but it didn’t quite pan out that way.

Minamino is suddenly the man looking as if he might just be inheriting the Lallana role. Part of me hopes Klopp throws him in again against Southampton, the team he spent time on loan at last season.