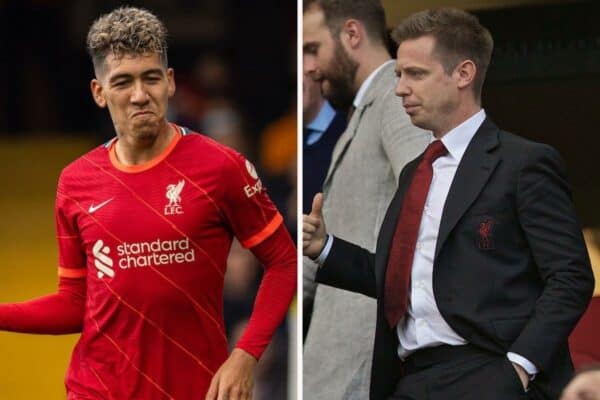 Michael Edwards has written an open letter to Liverpool supporters upon the news of his exit, with the sporting director including a brilliant Roberto Firmino story.

Edwards has confirmed that he will be leaving the Reds at the end of the season, having excelled in his role as sporting director since 2016.

The 42-year-old is to depart after over 10 years on Merseyside, and will be replaced by his current assistant sporting director Julian Ward.

In his early years in the role, Edwards attracted criticism due to mixed performances on the pitch, with an infamous article from the Mail‘s Neil Ashton – now PR advisor for Man United – blaming him for Brendan Rodgers’ failure.

Since then, he has proved himself a master in the job, with his influence on Liverpool’s recruitment playing a key role in the success so far under Jurgen Klopp.

Central to the Reds’ development with Klopp at the helm has been the endurance of Firmino, with the manager repeatedly stressing the importance of his No. 9.

As he addressed fans in his farewell letter – seven months before his exit – Edwards revealed his own admiration for the £29 million signing from Hoffenheim.

“One of the other questions I always get asked is ‘who was/is your favourite player?’. That’s a really difficult question to answer so I won’t even try,” he wrote.

“All I will say is my dog is called Bobby.”

Firmino arrived at the club before Edwards was formally appointed as sporting director, with chief executive Ian Ayre central to his decision to join in 2015.

But the Brazilian’s impact on Liverpool owes a great deal to Edwards’ expertise, defying those premature conclusions on the success of a player who has gone on to make 303 appearances for the club.

“Despite a lack of playing experience at any relevant level, Edwards, who earns £300,000 a year, has a big say on Liverpool’s notorious transfer committee,” Ashton wrote in 2016.

“He would arrive for meetings with Rodgers, managing director Ian Ayre, chief scout Barry Hunter and head of recruitment Dave Fallows armed with the latest data on potential targets.

“The committee have yet to explain how they came up with the figure of £29 million to sign Brazilian forward Roberto Firmino from Hoffenheim, who finished eighth in the Bundesliga last season.”

That Mail hackjob has been the source of many laughs throughout Edwards’ time at Anfield – proving to be little more than a dog’s dinner.