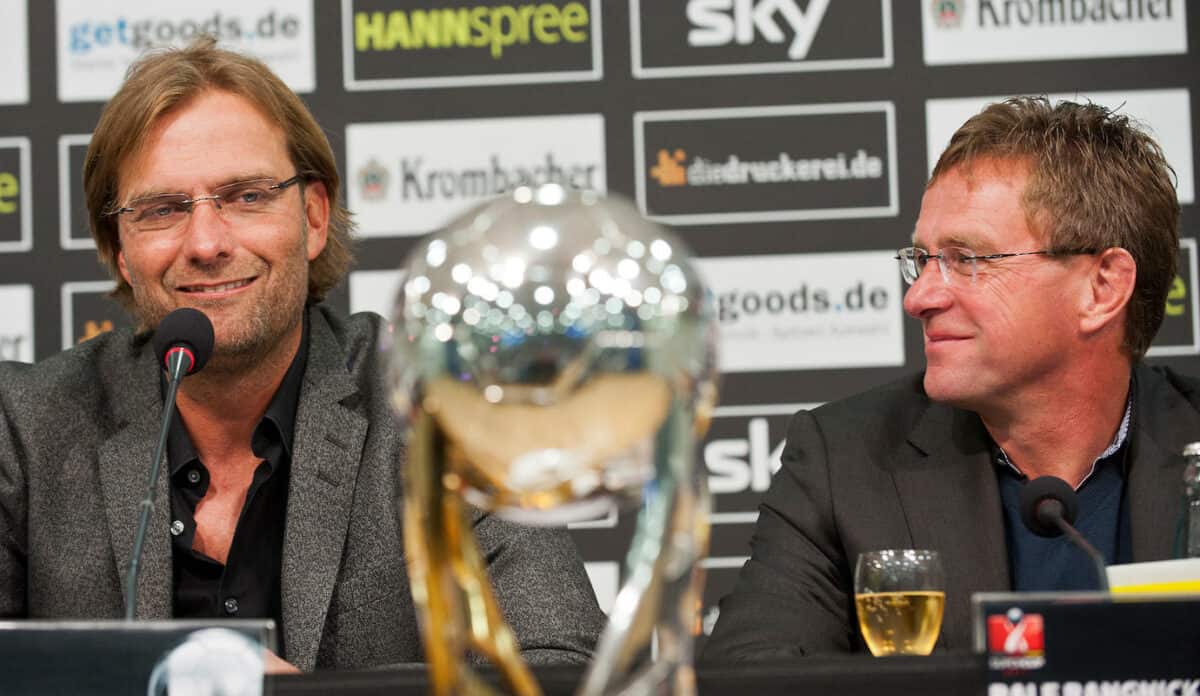 Man United are expected to name Ralf Rangnick as their interim manager until the end of the season and Jurgen Klopp knows the changes he will make is “not good news.”

With Ole Gunnar Solskjaer ushered out of the door after a turbulent season and off the back of convincing defeats to Liverpool, Man City and Watford, a new manager advertisement opened up at Old Trafford.

And United are closing in on Rangnick, a German manager who Klopp knows very well having come up against him on 13 occasions in Germany, first with Mainz and then with Dortmund.

In that time, Klopp recorded just two victories and when posed a question about his imminent arrival, the Liverpool boss was very complimentary and knows things are about to change.

“Usually, we don’t talk about things that aren’t confirmed yet. I might believe you you tell me they’re to happen,” Klopp told reporters.

“Unfortunately, a good coach is coming to England, to Manchester United. A really experienced manager, built most famously two clubs form nowehere to proper threats and forces in Germany with Hoffenheim and Leipzig.

“He did a lot of different jobs but his first concern was always being a coach, being a manager, and that’s what his best skill is, obviously.

“United will be organised on the pitch, I think we should realise that and that’s obviously not good news for other teams!

“But, of course, like all coaches in the world we need time to train with our teams and Ralf will pretty quick realise he has no time to train because they play all the time.

“That makes it a bit trickier for him but apart from that, a really good man and an outstanding coach, if it happens, will come to England.”

“Between coaches highly regarded, where he was he did incredible jobs. It started early as a very, very young at Stuttgart coaching the second team,” Klopp added.

“I’m pretty sure we went and brought them to the Bundelsliga, which was absolutely insane that time and then made his way up from there.

“We faced each other the first time when I was a very young coach when he was at Hanover, he might have forgotten that.

“They always played our opponent a week later so he called me the young manager of Mainz and asked plenty of questions and I was happy Ralf Rangnick was calling me but with all the information they needed, they got promoted and we didn’t.

“So he owes me still something!

“In the football world in Germany he is very, very well regarded, and rightly so.”

Rangnick’s appointment has not yet been officially confirmed as of early Friday afternoon but it’s expected to only be a matter of time. Liverpool next meet United on March 19 at Anfield.