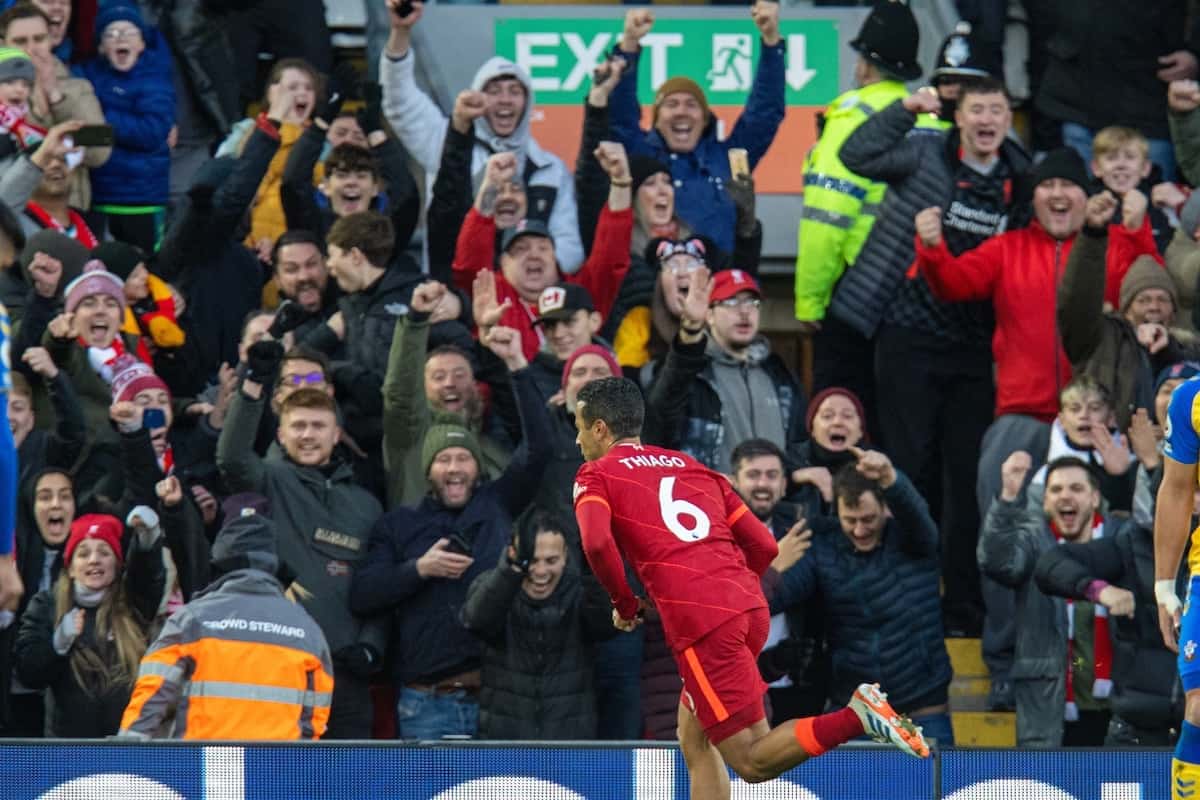 Thiago found the back of the net for the second game running and it was another excellent goal for Liverpool, with the midfielder relishing a 4-0 win over Southampton.

Prior to the midweek visit of Porto, Thiago had only scored once for the Reds, that being in the 2-0 victory over Southampton in an empty Anfield in May.

But having struck one of the best goals Anfield will ever see from 25 yards in the Champions League, the 30-year-old then followed it up with another impressive effort against the Saints.

This time, it was in front of the fans, and having seen the Kop net bulge on Wednesday night, it was those in the Anfield Road End who had the best seats to take in Thiago‘s latest strike.

It was clearly a special moment for the midfielder, who took to Instagram after the game with a simple message:

Speaking to LFCTV in his post-match interview, however, the Spaniard was more reserved, maintaining that the win was more important.

Thiago reflected on the landscape of the game, with Liverpool wary of overexerting themselves after his goal put them 3-0 up at half-time, with Everton to come on Wednesday night:

“As I said, it’s special to score in this stadium, but I am even more pleased with the win.

“We are pretty happy with our performance, mostly the first half than the second, because first half was a great game.

“We conceded a bit, but we also created a lot of chances. We created great football and in the end we got the result in the first half.

“So it’s a mix of feelings that you don’t have to have, you just have to be focused on this game and to stay hungry the whole game.”

Diogo Jota got the scoring going with a first-half double, with the striker clearly pleased with his contribution after a minor injury scare:

The returning Andy Robertson, who excelled, along with goalscorer Virgil van Dijk, his centre-back partner Ibrahima Konate and substitute James Milner all echoed his message:

Jordan Henderson added to Milner’s post, cherishing a “perfect day at Anfield” that saw him wear a rainbow armband and rainbow laces in support of the LGBTQ+ community:

Having responded to the 3-2 defeat to West Ham with three successive victories at Anfield – without conceding a goal – the Reds now turn their attention to the Merseyside derby.

It will be a tough fixture regardless of form, but Liverpool can take heart from their excellent run since returning from the international break.