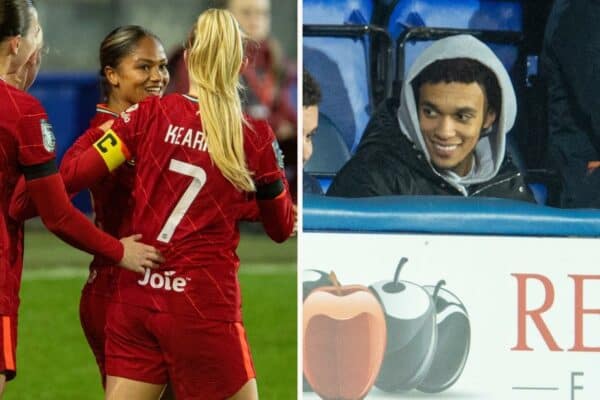 Trent Alexander-Arnold was in the stands as a fellow Scouser became the Liverpool Women’s youngest captain, with Missy Bo Kearns leading a 2-1 win over Blackburn.

It was a big moment for the 20-year-old Kearns, leading her childhood side out for a WSL Cup clash at Prenton Park, with the midfielder making history.

With manager Matt Beard giving her the armband in the absence of Niamh Fahey, the young Scouser became the youngest-ever woman to captain Liverpool.

She did so with her fellow Scouser, Alexander-Arnold, watching from the stands, with it likely that both will be permanent captains of the club in years to come.

Kearns played a valuable role in Liverpool’s cup victory, too, with two of her corners leading to goals from Jade Bailey and Taylor Hinds.

The first came after Blackburn goalkeeper Alexandra Brooks fumbled the ball, allowing Bailey to prod home, before half-time substitute Hinds headed in at the near post five minutes after coming on.

There were chances for both sides with the score at 2-0, and Blackburn clawed one back through Aimee Hodgson, but Liverpool were able to hold on for the three points.

The Reds now not only sit top of the Women’s Championship but also top of their group in the WSL Cup, with a win and two draws so far.

It was a memorable day for Kearns, who along with Hinds was named in the England under-23s squad hours before kickoff, with the midfielder taking to Twitter after the game:

Grateful to be the youngest @liverpoolfcw captain? loved every minute off it! 2-1 win and 2???? thanks to all the fans who came and watched x pic.twitter.com/9gZMEfqevh

Kearns was the only girl on an all-boys team as a youngster, playing alongside a certain Curtis Jones for Mossley Hill, as she told the club’s official website in August.

“We both joined Liverpool around the same time and it’s great to see he’s doing so well and we’ve come so far together,” she said.

“It’s brilliant that one is on the male side and I’m on the female side, and we basically have had the same journey and it’s good to see.

“I’m absolutely made up for Curtis to see him part of our first-team squad.”

The Scouse heritage is strong at Liverpool, and in the likes of Alexander-Arnold, Jones and Kearns, that looks set to continue long into the future.