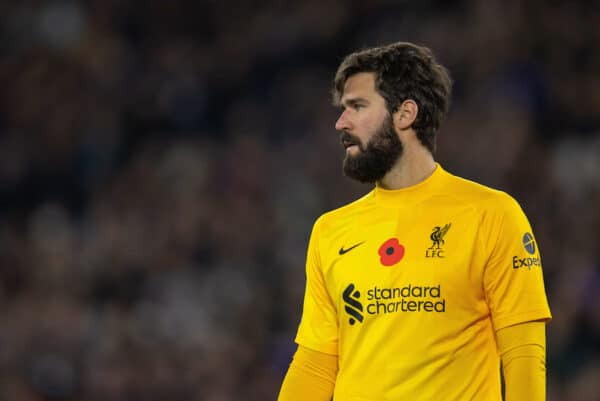 There were far too many below-par performers in Liverpool’s 3-2 defeat at West Ham, with Alisson suffering a rare off day.

The Reds faced a tough Premier League encounter on Sunday, coming up against the fourth-place Hammers at the London Stadium.

From minute one, Liverpool didn’t look to be at the races and they went on to suffer a depressing afternoon in east London.

The loss leaves Jurgen Klopp‘s side four points adrift of league leaders Chelsea and now below the Hammers in fourth.

In truth, this wasn’t a game littered with good displays, so we’ll focus on the other end of the spectrum.

Alisson (3.6) took home the dreaded lowest average rating, with the Brazilian lacking for all three goals.

TIA were left hugely disappointed with the Brazilian’s showing, saying he was “not strong or sure enough” for the opener and got worse from that point on.

The second-worst player on the day was Andy Robertson (4.7), who is experiencing a bad run of form at present time.

The Echo‘s Ian Doyle claimed the Scot “had an absolute stinker second half”, with pressure now on him to keep his place over Kostas Tsimikas.

Also in the bottom-three was Diogo Jota (5.2), who failed to make a notable impact in the capital.

The Portugal international lost eight duels, according to FotMob, and he only played 17 accurate passes throughout his 76-minute showing.

And Liverpool’s highest-rated player was Trent Alexander-Arnold (6.3), largely due to his beauty of a free-kick.

Even he was far from blameless, however, with TIA noting that he was “sleeping for the third goal,” with Kurt Zouma ghosting in at the back post.

It’s now time for yet another international break – how many have there been this season! – with the Reds returning to action at home to Arsenal on November 20 (5.30pm GMT).