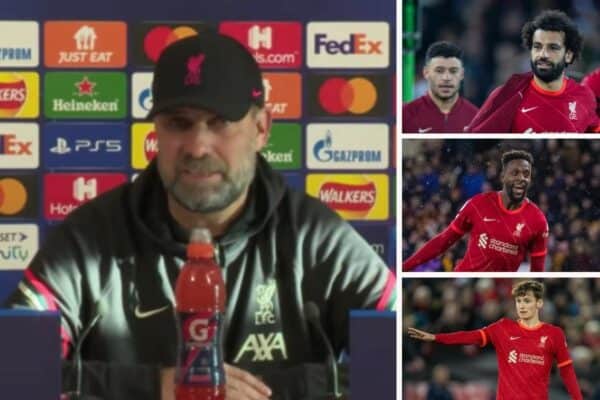 Changes to the team at San Siro were confirmed by Jurgen Klopp ahead of his team’s trip to Italy on Monday, with plenty of words reserved for Saturday’s hero Divock Origi.

That’s the mantra for Tuesday and it is completely justifiable following an intense week whereby the manager made just one change to his XI over the last three games.

And Klopp stressed it’s a need and not simply a want.

“We have to rotate, we will rotate. That’s clear. We ‘have’ to is the headline!

“The medical department would smash me if I played the same side again, so I will make changes!

One name you can expect on the teamsheet

And that is none other than Saturday’s hero, Divock Origi. While resistant to say who else will get an opportunity, Klopp did say it is “pretty likely” the No. 27 starts.

The forward dominated the talk pre-match following his contribution at Wolves and while he does not get too many opportunities, Klopp was again full of praise for how Origi has handled the situation.

The No. 11 has been vocal in his desire to remain at Liverpool for the long-term but contract talks have been largely unmoving, but Klopp has called for patience.

“Extending a contract with a player like Mo is not that you meet for a cup of tea in the afternoon and find an agreement,” Klopp stressed.

“I can only say a few things because all the rest is not for the public.

“Mo is fine. I’m fine. I think what we all want is clear. Things like this need time, that’s it.”

We all want it to be signed, sealed and delivered and as Salah has so often said, it’s in the hands of the club’s hierarchy. Fingers crossed it can be resolved in a timely manner from here on out!

A chance for the youngsters

With the need to rest key pillars in the squad, it only makes sense to hand the club’s youth an opportunity on the pitch and experience in the matchday squad.

Tyler Morton, Conor Bradley and Elijah Dixon-Bonner were present in training on Monday to suggest that’s the role they will play, with Morton the likeliest to take up a prominent role.

“There are a lot of really good young players in this club at the moment, Tyler is one of them,” Klopp said.

“He’s not the only one. I think we will have more young boys tomorrow, travelling with us and in the squad. They are only with us because they have the quality.”