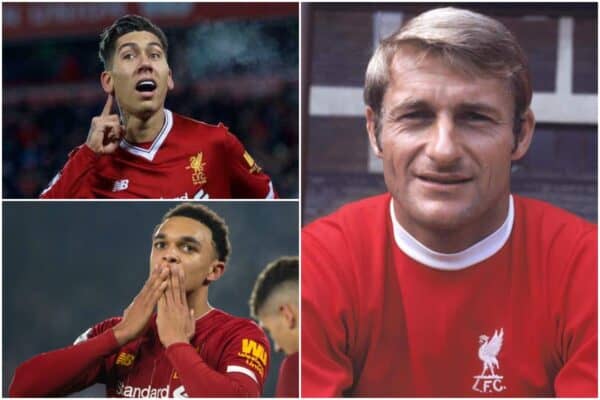 Liverpool were hoping to play today but instead it’s an enforced extended rest – but over the years we’ve created plenty of Boxing Day memories for the fans.

A depleted Leeds might have escaped the in-form and free-scoring Reds for now, but we hardly have to turn the calendar back too far to recall some fantastic post-Christmas days out for Jurgen Klopp‘s side.

He’s far from the only boss to preside over some fantastic and memorable wins on 26 December, though.

We’ve searched the record books and rewound the clock and picked out eight of the best Boxing Day wins from yesteryear.

If the game can’t be a classic, a win is the only requirement. Of course, when it’s courtesy of a late strike to seal a memorable occasion for those there, it’s even better.

Our first game went that exact way, with Jan Molby and Dalian Atkinson each scoring within minutes of kick-off in either half as the Reds hosted Sheffield Wednesday in ’89.

Step forward the ever-reliable in front of goal Ian Rush to win it in the closing stages for Kenny Dalglish‘s team.

Liverpool had been one of the most consistent sides in Europe over the past few years by the time the 08/09 season rolled around, but summer transfers hadn’t all been successful this time around.

Robbie Keane did his best to put a stop to the criticism here with a two-goal haul to see off Bolton, with Albert Riera netting the other.

It took the Irish forward to five for the season, but he’d soon be back off to former club Spurs. Rafa was in the stands for this game after an operation, so maybe he missed who scored!

A more flattering scoreline this time as the Reds ran riot against West Brom, hitting five and even missing a penalty through Milan Baros.

John Arne Riise was the star of the show, striking twice and almost netting a hat-trick, with Steven Gerrard, Florent Sinama-Pongolle and Luis Garcia all on the scoresheet too.

This was our first notable win since the madness of Olympiacos earlier in the month – a very happy Christmas for Reds overall, before the euphoria went into overdrive at the end of the season.

One year later and the Reds were at it again. The performance was more controlled, the scoreline rather more low-key, but the team was utterly relentless.

A 2-0 win over Newcastle meant an eighth clean sheet and victory on the spin, with Gerrard once more setting us away before Lee Bowyer was sent-off for good measure.

This victor was a nice boost after returning from the Club World Cup final as very much undeserved runners-up.

4. 1963: No missing out on most lunatic Boxing Day in history

No Boxing Day compilation is complete without referring to the infamous afternoon of 1963, when 10 top-flight games contributed a whopping haul of 66 goals. Fulham won 10-1, Man United had six put past them, Spurs were involved in a 4-4 draw and West Ham lost 8-2 at home to Blackburn – and the Reds played their part in the goalfest, too.

There were seven goals for the punters as we hammered Stoke City, Roger Hunt plundering no fewer than four of them with the Reds en route to the title.

Sometimes teams turn up to face the Reds and are just utterly, woefully outclassed. That’s especially true in the Klopp era and was the fate to befall Swansea as Roberto Firmino and Co tore them apart four years ago.

Bobby netted twice, including a trademark no-look finish, while Phil Coutinho scored early and Trent Alexander-Arnold battered in his first Anfield goal with a strike off the bar.

Alex Oxlade-Chamberlain wrapped up the win with a gorgeous dinked finish over a defender and the ‘keeper as the full-throttle Reds showed what their attack would become capable of on a more regular basis in the future.

Alan Hansen scored early on to put the Reds ahead, before David Johnson scored in front of the Kop with five minutes left, his 12th of the campaign, to seal the points and top spot for Bob Paisley’s team.

51,000 very happy fans went home that day convinced the Reds were going to win the league…which they did indeed do – by just two points ahead of these same rivals.

1. 2019: Trent trounces Leicester with Reds on top of the world

Our best performance and result on Boxing Day, though, might just be the relatively recent thrashing of a former boss…and our next opponents.

Just two years ago we returned from the Club World Cup as officially the greatest club in the planet, with little recovery time and up against what the media was then terming the greatest title challenger to ourselves and Man City…and we absolutely wiped the floor with them.

Trent was irrepressible, claiming a pair of assists and netting a scorcher himself in a thumping, statement-sounding 4-0 victory.

We missed a host of other chances too but the warning had well and truly been served: Liverpool were just months away from winning the league and being Champions of Everything.