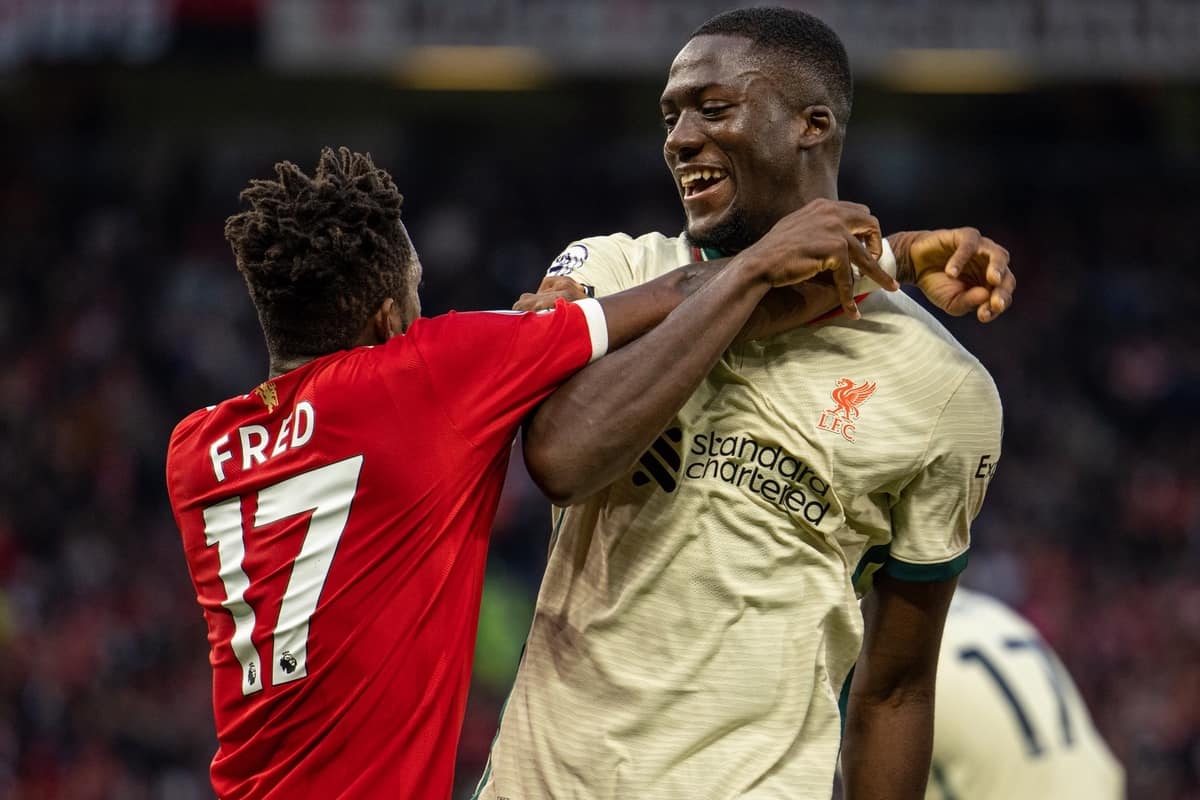 One of the most iconic moments of Ibrahima Konate‘s time at Liverpool so far was his smiling through a tussle with Man United midfielder Fred, which he has now relived.

Konate has needed to be patient when it comes to opportunities in his first half-season at Anfield, making only seven appearances for the Reds so far.

But there is a clear faith in the young Frenchman among Jurgen Klopp and his coaching staff, with Konate trusted to step in for Joel Matip as the No. 32’s fitness is carefully managed.

He was surprisingly turned to for the trip to Man United on October 24, and though his inclusion was seen as a concern before kickoff, he answered those worries emphatically.

The 22-year-old dominated at Old Trafford, playing a big part in keeping a clean sheet as Liverpool surged to a 5-0 win, and in his seven outings so far, the Reds have only conceded three goals.

During that humiliation of United, Cristiano Ronaldo felled Curtis Jones and twice kicked the ball into his midriff while on the floor.

Can’t stop laughing at this. Huge game for Konate, loads of pressure and he’s out there giggling, treating Fred like his little brother….? pic.twitter.com/no0p36BoR7

In response, Jones’ team-mates came to his defence, with Virgil van Dijk forcing Ronaldo away with a bump of his chest and Konate shoving Bruno Fernandes out of the scene, with Fred taking exception.

Images of a towering Konate smiling as Fred attempted to grab him around the neck went viral after the win, and speaking to Liverpool’s official website, the centre-back has explained his view on the situation.

“But after the game I received so many messages, maybe 50 times my friends sent me the videos. I said, ‘no!’, because it was natural, you know.

“But yes, it was funny. I just protect my family.”

Konate added: “When you play against United, you make a clean sheet and you win 5-0, it is amazing, it was historic.”

These small moments can play a big part in a new signing establishing himself as a favourite among Liverpool fans, as was the case with Kostas Tsimikas‘ battling display against Burnley earlier in the campaign.

For Konate, it was clearly not a big deal, but his instinct to “protect his family” will only endear himself further to the Kop.