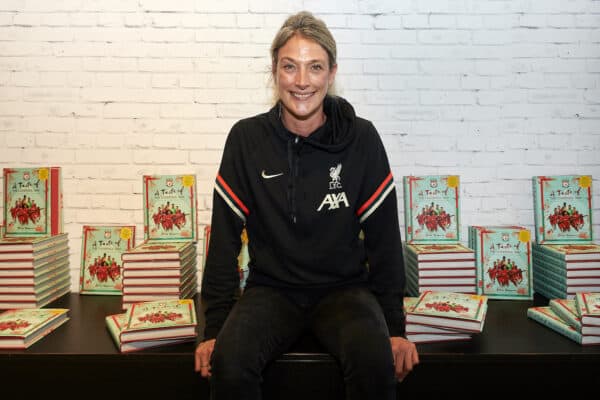 We’ve all heard the proverbial saying ‘you are what you eat’, but just how is a powerhouse like Liverpool Football Club fuelled? By a “transformative figure” called Mona Nemmer, that’s how.

Long gone are the days when beers, full English breakfasts and fatty foods (badly) fuelled football players; now there are entire departments dedicated to nutrition and a healthy diet.

Mona Nemmer has been leading the charge behind the scenes at Liverpool Football Club since 2016.

Jurgen Klopp holds her in such high regard that he describes Mona as “a transformative figure for professional football” and that “her ability to influence and educate the players and staff makes her one of the most valuable team members at LFC.”

A resounding endorsement, to say the very least.

Nemmer is the club’s head of nutrition and amid Klopp and the club’s bid to turn over every stone in the pursuit of sustained success, Nemmer and her team have been fundamental.

Straight off the bat, she had the players on side and Jordan Henderson led the way in the early days, saying: “I’ve never seen anything like it since I’ve been involved in football in terms of the food we’re having.”

We sat down with Mona to discuss her journey, life at Liverpool, the ketchup debate, and whether there are any decent chefs among the current Reds’ squad…

“When I first came I was actually amazed by how disciplined they were already and how much good knowledge was available,” Nemmer told This Is Anfield following the launch of her new book ‘A Taste of the Liverpool Way‘.

“It was quite easy to go from there and extend and put in a lot of creativity, inspiration and simply extend what I found already.

“There was already a lovely team of chefs and front of house people, Caroline and Carol, so we had already a good start towards what we wanted to achieve and we started to take it from there.”

Working first with the German under-21 team and then Bayern Munich, Monner has now been in “this beautiful city” and “this amazing football club” for nearing on six years.

There are, Nemmer says, a couple of “masterchefs” among the Liverpool squad – although she won’t name names: “I can’t name them, but there are a couple of good ones around. They enjoy it, having family dinners and hosting friends. It’s great to see how connected they are to nutrition.”

Cooking has even been a team bonding exercise at the training ground, with a cake baking challenge after a five-a-side tournament: “There were players that were more advanced in the kitchen but doing it together was wonderful to see, everyone had a smile on and the banter as well.”

So how did Liverpool’s approach arrive? Well, “it came from Jurgen,” Nemmer explains.

“It was interesting because we didn’t know each other and when he phoned me the first time it was very exciting – ‘Oh my god what might he want?! Does he need some nutritional advice or where can I help?’.

“He actually asked me if I would love to go for a new challenge. It was just the right moment, the right time and I’m very, very grateful for an amazing journey so far.

“For us, it’s absolutely amazing that we got the trust of Jurgen and the owners to create a complete department.”

Klopp is a manager who is superb at getting outside advice, bringing in specialists such as throw-in coach Thomas Gronnemark, working with Neuro11 on set-pieces, German surfer Sebastian Steudtner for advice on breathing techniques, and even BBC adventurer Ben Fogle for some inspirational words.

“[It is] wonderful to see that he is so open to a new, different approach and very holistic and sustainable approach,” observes Nemmer. “That makes it much easier when you have the ability to create from scratch.”

The ketchup debate, education and advice!

Often, when new managers arrive into a club there are headlines of them banning ketchup or other such ‘off limits’ items. But Nemmer insists it’s “all about balance” and on the ketchup debate specifically she says it isn’t banned inside the AXA Training Centre.

“For us, it’s very, very important to not just take away but to replace and extend and also explain,” she says. “The tiny bit of explanation can [make the difference]. We probably call [ketchup] different and we would have a replacement for that.

“So in case there was a product where you would need to have a tiny bit of nutritional doubt on it based on how it is produced, we have the ability to produce our own things and make sure the right ingredients are in there and that it’s right for the boys.”

Inside Anfield on a matchday, the working media are sometimes treated to what’s called ‘LFC Chicken’ – so perhaps there’s some ‘LFC Ketchup’ inside the Kirkby training base!

Nemmer’s influence has not been just for the now but for the sustained future of the club as the choice of food at Kirkby is matched by the education of every nutritional choice, and not just for the first team.

“About five years ago we started a curriculum,” Nemmer explains. “Like an educational curriculum around nutrition and made specifically for different age groups.

“So, which sort of knowledge do you need to achieve in year 12, 14, 15? It’s amazing. Our lovely academy nutritionist Tom has all these workshops, creates newsletters and there are evenings for house parents.

“For us it’s incredible to see when we compare the age groups, so five years ago to now and how different it is and how educated they are.

“When we have players that come in from the academy that join in the first team, they have such a good knowledge and it’s so wonderful to see as it influences their decision-making process massively. ”

Support is around every corner and with “everything [made] in-house,” meal plans are unique to every player and in turn, they also have the knowledge to make autonomous decisions regarding their nutrition.

Finally, we ask Nemmer for her one piece of nutritional advice for supporters…”the book,” she jokes!

“You can find so many lovely answers there, stories and so much input that empowers you; pictures and infographics that are understandable for every age group.”

It’s a book we expect Jurgen would certainly recommend this Christmas!

* You can buy Mona’s book ‘A taste of The Liverpool Way‘ from the official LFC store, here.