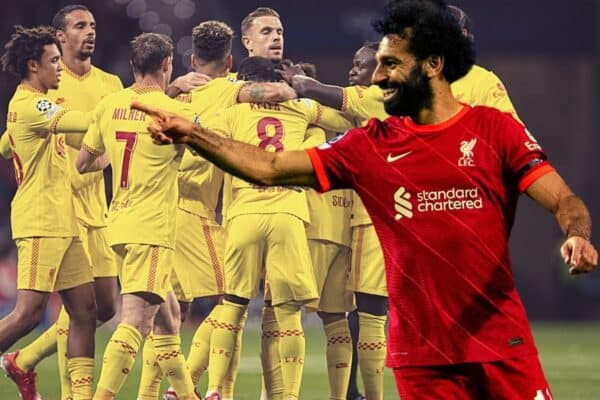 Liverpool could record a 100 percent win rate in the Champions League group stage with victory over AC Milan, while Mohamed Salah can set another club record.

Tonight, Liverpool could become the first English club to win all six games of a Champions League group phase.

Prior to this season the feat had only been achieved seven times, though Bayern Munich and Ajax could also join the elite group as they both currently have a 100 percent record.

They have never before won all three of their away games in any European group phase and if they do win this match it will be the seventh time an English team has done so.

Chelsea and Man United have done so twice with Arsenal and Man City doing so on a single occasion.

They could also win six games in a row in the Champions League proper for the first time ever, though they did so in the 2005/06 qualifying phase.

Another record for Mo!

Should he score, Salah will set a new club record for goals scored in the group stage of a European competition.

He has six goals so far, matching the total set by Roberto Firmino in 2017/18.

Salah could also become the first Liverpool player to score in five group games of the same European campaign.

Salah has scored in eight of his last 10 Champions League appearances.

He has 32 European goals in total for the club (all in this competition) and is chasing down Steven Gerrard’s club record of 41 in all European competitions.

The No. 11 has scored in each of Liverpool’s last six away games in Europe – a club record, beating his team-mate Firmino who netted in four on the spin in 2017/18.

Salah requires one goal to register 20 goals this season in all competitions.

If he scores before December 15, he will reach the landmark for the club in the third-fastest time by date behind only Ian Rush (November 8, 1986) and Roger Hunt (November 25, 1961).

The win at Wolves last Saturday saw Liverpool fail to score at least twice in an away game this season for the first time.

Have scored in 29 consecutive games in all competitions since failing to score against Real Madrid at Anfield in April 2021.

Only once in history have they gone on a longer run, that being 31 matches from April 1957 to January 1958 under Phil Taylor.

Liverpool have scored 39 goals in 12 away games this season in league and cup while in the last 15 games away from Anfield have found the net 48 times.

They have failed to score in the opening half in only two of the last 16 away games.

This will be Milan’s 43rd encounter with an English club.

In 18 games at home to English teams they have won nine, drawn four and lost five.

Those five defeats have come in the last six home games with the only win coming in the 4-0 defeat of Arsenal in the quarter-final of this competition in 2011/12.

They failed to score in four matches during that sequence.

He was the club’s leading scorer last season with 17 goals in all competitions, 15 in the league.

He has scored once in six winless appearances against Liverpool – a late equaliser for United in a 1-1 draw at Old Trafford in 2017.

Danny Makkelie takes charge of Liverpool for the second time this season – having also reffed the home game vs. Atletico Madrid on Matchday 4.