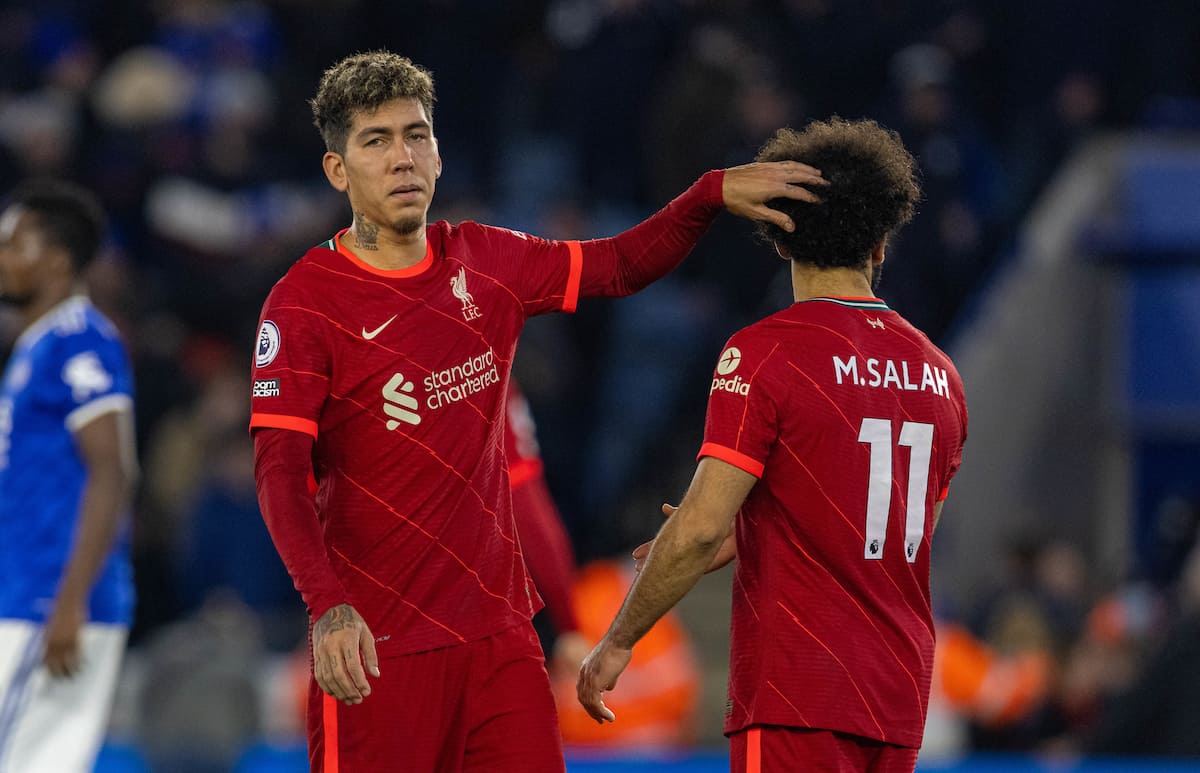 Liverpool delivered one of their worst performances of the season against a Leicester side that was thrashed just two days earlier, leaving many to lament a title race being over.

Liverpool arrived in Leicester with two welcome senior faces in tow after their time in isolation and while dominating the first half, had little to show for it.

Mohamed Salah proved he was human seeing his penalty saved and as chances went begging, Leicester duly punished the Reds through Ademola Lookman.

The hosts made it look as though it was Liverpool who played 48 hours prior and not the other way around as Jurgen Klopp‘s men were sluggish and never looked like they could hit the scoreboard.

It was a blow Liverpool could not afford to take and while there is a game in hand, the Reds are now six points adrift of Man City.

There was a common theme as supporters reacted to the Reds’ result across social media, that being the title race…

It’s just hard to take, because with City you can’t really afford any slip ups.

These lost 6-3 to Man City two days ago. This is a truly shocking performance from Liverpool.

Wowee that's a bad one. I'll be honest, I went into that expecting a comfortable victory given the standard of Leicester's defending + the injuries they had. But we've come out of it 6 pts behind City with Chelsea away next. Properly galling defeat.

Completely lost this game with the changes too. Shape completely lost in midfield and Leicester made clever adjustments off bench too. Really poor second half. Really similar to the loss at Southampton at same time last year

Title race is surely over. Don't like conceding it early, but that was a shocker, going into a tough period. Worst display in eons. Started badly and never got going. Like watching a Ferrari being driven badly around a housing estate. Such a waste.

Made to pay for missing some huge, huge chances and then for a switch off at the back. That’s a sickener, one that feels like it may be very significant come the end of the season.

Huge blow for Liverpool. Rare off day can be forgiven, but can't afford to drop points like that while competing with this Manchester City side.

Liverpool too slow in possession and too casual at key moments. They’ve won well this season but think those results have disguised where they’re really at. Thought Oxlade-Chamberlain passed the ball more cleanly than anyone else. Klopp’s substitutions did not work. Rodgers’ did.

That Matip looked to be the only player trying to get something going says everything.

Body language was not great from Liverpool and we certainly looked as though we played 48 hours ago, not 6 days.

Just had a sense we could have played all night and we wouldn't have scored there. So wasteful, on another day we win 3 or 4-1. Nothing is won or lost yet, but that's a blow in the title race for sure. Just need to keep going, put another run together and see where it takes us

The fact Joel Matip was Liverpool's most potent attacking player tells you every you need to know. The penalty and the Mane miss might have changed things but Liverpool were miles off it tonight.

Look there has to be zero excuses. Just a shit day for #LFC. We are up against a relentless opponent – with unlimited resources. There is zero margin for error. But let’s be realistic. The CL is still a big target. This is a great team in our history – never judge on one game.

There can be no questioning how damaging the result is when the margins at the top are so tight, there is simply no room for a bad day at the office.

That’s what it was for Liverpool and they’ll need to quickly dust themselves off as Chelsea is next up on the weekend.