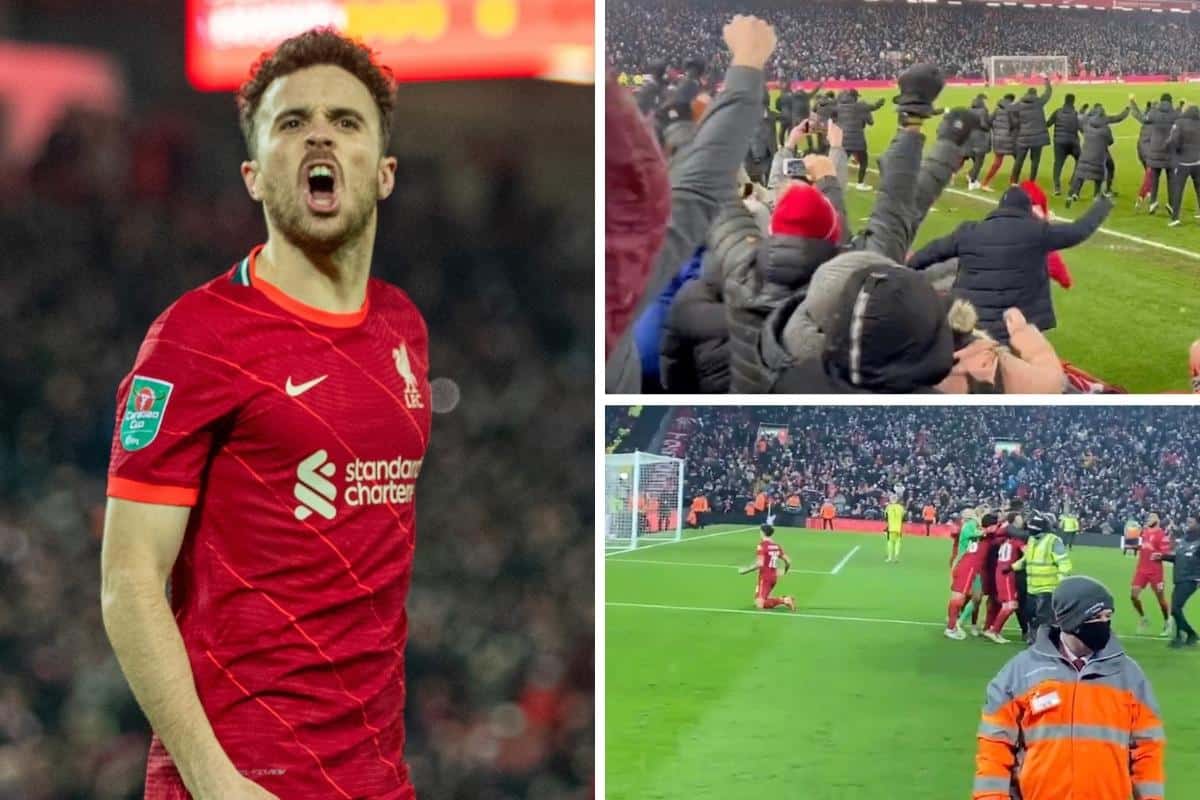 Liverpool’s comeback victory over Leicester in the League Cup came with a vengeful edge, with Diogo Jota goading the away fans after their behaviour throughout.

Three days before Christmas, after likely the most difficult two years in many of their lifetimes, Leicester fans spent much of their League Cup quarter-final singing ‘feed the Scousers’.

When they weren’t, there were choruses of the Steven Gerrard chant, sung while the manager responsible for that 2-0 loss to Chelsea in 2014 was in their own dugout.

Chants about poverty are nothing new at Anfield, but they certainly brought the Liverpool supporters into life on Wednesday night, producing one of the most ferocious atmospheres seen during Jurgen Klopp‘s reign.

The players responded with a stunning fightback to draw 3-3 in normal time and then win 5-4 on penalties, while a suspiciously strong Leicester lineup time-wasted and play-acted.

Liverpool players mob goalkeeper Caoimhín Kelleher after he made two saves in the penalty shoot-out to take them through to the semi-final ? ? pic.twitter.com/vnhDqZKpLe

Something clearly got to Diogo Jota, scorer of the Reds’ second goal and the winning spot-kick, as after he clinched victory, he tore over to the away supporters.

Some of the shithousery after that penalty shootout love it haha, pulled my fucking neck out celebrating Taki’s equaliser as well, up the reds ?? #LFC #LFCfamily pic.twitter.com/robnuSXtKs

Pumping his fists in defiance, the striker was then joined by Neco Williams, sliding on his knees towards the Anfield Road End and raising his arms as the rest of the squad swarmed Caoimhin Kelleher.

I filmed this whenthe Anfield -crowd were nail biting before Jota’s decisive penalty. And the explosion of feelings after he scored@ViaplayFotball @LFC pic.twitter.com/GmyjQ7BN1y

They were brilliant scenes which fit the spirit of the night, as Liverpool came back from the brink and sealed a semi-final place.

I hope you enjoyed that as much as me ?
Merry Christmas Reds ? pic.twitter.com/ORgZsXTq93

Watching on, Liverpool fans took to social media to praise Jota for his celebrations:

Loved Jota giving it the big one to the morons in their end after the winner.

Support foodbanks and fuck anyone who thinks poverty or kids going hungry is a laughing matter. pic.twitter.com/sMjW0W30Lx

Diogo Jota has the biggest balls in the league. FACT.

1.) Kasper Schmeichel trying to shithouse and make Jota walk for the penalty. Jota ignores it, ref has to go and collect it.

2.) Jota twats one in the bottom corner.

3.) Celebrates in front of the Leicester fans.

Schmeichel dropped the ball in front of him wanting Jota to come up to him to collect the ball but Jota just stood on the penalty spot.

In the end the ref had to go and get the ball. ?

Then gave it large to the Leicester fans ??

Some venom in Diogo Jota's celebrations with the penalty (you might not get to see one of the camera angles before the watershed) but no question his intensity was transformative for Liverpool. An absolutely outstanding signing.

HAHHAAHA Jota is such a shithouse man, he got the Suarez and robbo gene ??

Really really good sticking it to their end by Jota btw pic.twitter.com/27RAa79LCu

Jota is a certified comrade and he fucking hates the feed the scousers chants as much as the rest of us https://t.co/Q2WFVTrLQr

I’ve not seen a Liverpool player celebrate so exuberantly in front of Leicester City fans since Robbie Fowler ‘adjusted his jockstrap’ at Filbert Street on Boxing Day 1994 #LIVLEI #LFC pic.twitter.com/V2e7fh0sU5

Jota’s goal on Wednesday night was his 12th of the season, putting him only one behind his total for the previous campaign and bringing his overall tally to 25 in 52 games for Liverpool.

It was a remarkable impact from the No. 20, who sparked the Reds to action alongside the likes of Williams, Roberto Firmino, Alex Oxlade-Chamberlain and Naby Keita, and his celebrations showed he completely gets it.

Feed the Scousers? Feed the Jota and he will score.