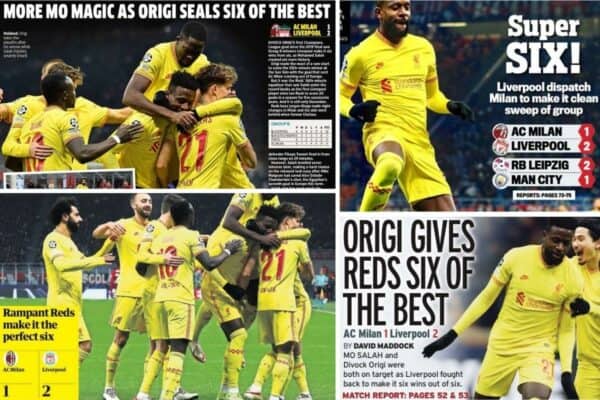 Liverpool broke yet another significant record after their 2-1 win away at AC Milan, as the watching media lauded their greatness as a team.

The Reds were much-changed at the San Siro, but that did little to stop them.

Goals from Mohamed Salah and Divock Origi saw Jurgen Klopp‘s team overcome a first-half deficit, finishing Group B with a 100 percent record in the process.

Liverpool find themselves in a purple patch at the moment following six wins in a row in all competitions, suggesting silverware could come their way as the season progresses.

Here’s a look at how the media reacted to the Reds’ record-breaking win.

A second-string Liverpool side were lauded for their performance…

The Daily Mail‘s Dominic King thought it was further proof that European Cup No. 7 could be on its way to Anfield:

“High up in the stands, towards the end of the game, a group of Liverpool fans made a point of unfurling a red banner across green tarpaulin to make it stand out.

“‘Campione Liverpool,’ it declared, simply, and once again you came away from a night in Europe thinking that declaration will ring true in St Petersburg next May. Beating AC Milan away from home might not have the lustre of old but that should not detract from the achievement.

“AC Milan are seven-time European Cup winners but Liverpool, in this vein, look capable of joining them on that number.

“It remains to be seen if they will stay the distance in the domestic title race but in Europe anything is possible.”

Melissa Reddy, of the Independent, was another who heaped praise on Klopp’s men:

“You could have been forgiven for watching the match in the belief that Liverpool were the team playing for a Champions League lifeline, not the ones gracing San Siro armed with a clean sweep of group victories.

“An In Need of Minutes XI, complemented with Mohamed Salah, Sadio Mane and Alisson dominated and dictated proceedings, while Milan were content with letting the game happen to them which was curious considering their need to win.

“Liverpool, as has become habit on occasion, made it look easy. They got to throw on the kids at the death – Max Woltman and Conor Bradley – for minutes they’ll never forget as Milan limped out of Europe.”

Andy Hunter of the Guardian hailed the manner in which Liverpool overcame the ‘Group of Death’:

“In a group of European heavyweights only Liverpool ultimately lived up to the billing. Jürgen Klopp’s makeshift team made light work of Milan, just as more recognisable units had done to Atletico Madrid and Porto, as Liverpool became the first English club to win all six games in a Champions League group stage.

“Even with nothing at stake Liverpool managed to send an ominous message to their Champions League rivals.

“Klopp made eight changes from the side that started Saturday’s dramatic win at Wolves, gave 19-year-old midfielder Tyler Morton his third Liverpool start, overhauled the back four completely and gave Virgil van Dijk, Jordan Henderson, Diogo Jota plus Thiago Alcantara the night off.

“Yet there remained world class quality in attack with Salah and Sadio Mane and Liverpool, for all the disruption, enjoyed a comfortable run-out at San Siro against the leaders of Serie A.”

Numerous impressive statistics had to be touched upon by some…

The Telegraph‘s Mike McGrath praised another key Origi contribution, as he allowed Liverpool to make history:

“Divock Origi’s status as a Liverpool cult hero was established well before this week but at San Siro he added another entry to his showreel of significant goals.

“Four days after rescuing his team-mates with a last-gasp winner at Wolves, here he stooped to head in a winner that ensured Jürgen Klopp’s side became the first English team to progress from the Champions League group stage with a 100 per cent record.

“It may not have been as memorable as his goal in the 2019 final, but Origi keeps reminding us of his class off the bench.”

This Is Anfield‘s James Nalton touched upon a special start to the season:

“The win keeps Liverpool’s latest remarkable run of games going. They have only lost one game all season, and have now won 11 of their last 13.

“They won six out of six in their Champions League group – supposedly a ‘group of death’ – and only Ajax and potentially Bayern Munich can boast a similar record at this stage.

“They’ll head into this weekend’s match against Steven Gerrard’s Aston Villa in high spirits and on a good run of form, and it helps it’s a home game and they won’t have to travel.

“They also do so with the majority of the first team rested and with squad players gaining vital match sharpness on a big stage, becoming part of this exceptional early form in the Champions League.”

And David Maddock of the Mirror, couldn’t help but wax lyrical over Salah’s relentless numbers:

“But inevitably, it was Mohamed Salah who was the real difference, as he taunted the poor Italians, and turned the game with a brilliant finish to level Fikayo Tomori’s opener in the first half.

“When Alex Oxlade-Chamberlain’s clever snap shot was only weakly parried by the jittery home keeper Mike Maignan, Salah was alert enough to drive the rising ball into the roof of the net, with the technical brilliance of someone at the peak of his game.

“It took his Champions League tally to seven, and his Liverpool total to 20 in all competitions…for the fifth year running since he arrived at the club. It puts him in hallowed company, because the last to do that was Reds legend Ian Rush.

“It’s no longer an exaggeration to say the Egyptian is fast rising to that level in the Anfield annals, ranking alongside the likes of Rush, Roger Hunt Gordon Hodgson and Robbie Fowler.”

There was also special praise for a number of other individuals…

“True to his word, Liverpool’s play had more snap to it from word go and younger Tyler Morton was the first to have a shot. It might have lacked the power to beat goalkeeper Mike Maignan, here was another glimmer of why Klopp is glowing about this particular 18-year-old.

“Morton is developing at a rate of knots and an experience of this nature, being asked to dictate the rhythm in this arena, can only accelerate his education.

“He’s started the last two Champions League games and he will be starting many more in the future if he shows this poise.”

Nalton focused on the dominant Nat Phillips, who produced a memorable turn in the second half:

“The game was won thanks to goals from Mohamed Salah and Divock Origi, but the battle was won when Nat Phillips sent two Milan players careering past him as he manoeuvered his way out of his own area.

“The San Siro has seen many world-class, legendary defenders grace its turf, and to see Liverpool’s cult hero from last season performing so well in this theatre was great to see.

“Phillips is sometimes nicknamed the Bolton Baresi thanks to his performances that helped Liverpool qualify for the Champions League against the odds last season, so it was apt he had a good game in this competition at the home of the club where the Italian is so revered.

“No one’s getting carried away (OK, maybe they are) not least Phillips himself, but such moments are there to be enjoyed.

“A knock to the face in a challenge with Zlatan Ibrahimovic saw him mildly troubled in the final minutes, but he and Ibrahima Konate between them had kept Milan’s top scorer quiet all game.”

“Up against the considerable presence of Zlatan Ibrahimovic was the equally formidable Ibrahima Konate, who might be almost half the age of the Swede.

“He’s a lot more than half the player.

“The Frenchman stood up to a challenge that would surely make many defenders crumble, if only on reputation, and he can proud of a display that was another step along on his development.

“Alongside another new partner in Nat Phillips, Konate was terrific, and Liverpool’s only summer signing looks to have been a very clever one.”