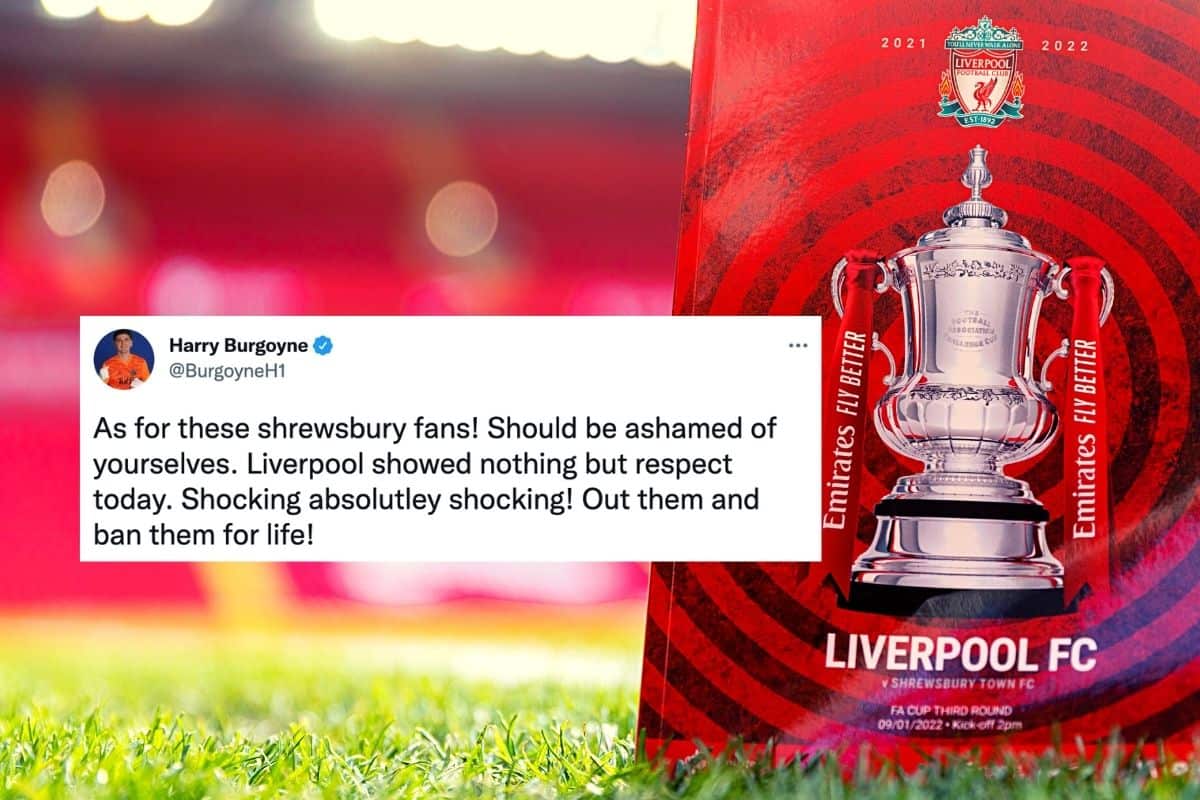 Shrewsbury goalkeeper Harry Burgoyne has called out his own team’s supporters after a video of a section of fans mocking the Hillsborough disaster.

A video of Shrews fans singing about the 96 (now actually 97 victims officially who were unlawfully killed in the tragedy in 1989), appeared on social media before the match.

In a rare move, Burgoyne took to social media to call for life bans for those fans.

“As for these Shrewsbury fans!” wrote Burgoyne. “Should be ashamed of yourselves. Liverpool showed nothing but respect today. Shocking absolutley shocking! Out them and ban them for life!”

As for these shrewsbury fans! Should be ashamed of yourselves. Liverpool showed nothing but respect today. Shocking absolutley shocking! Out them and ban them for life! https://t.co/DiJJsyB1eU

In another Tweet, in response to a Liverpool supporter, Burgoyne added: “Respect goes a long way in the game and theres a severe lack of it these days! All the best for rest of the season.”

In all honesty this is just a variation of the shite Liverpool have to put up with every week but is largely ignored by the media and the clubs who’s fans sing it. So fair play to Shrewsbury’s goalie for speaking out. Their players and manager were great today https://t.co/1vBng0Lttf

This comes shortly after Leicester fans, in games both at Anfield and at the King Power Stadium, spent most of the match singing about food poverty rates on Merseyside.

And while clubs are increasingly starting to release statements condemning racist or homophobic chanting, as Liverpool have done recently in relation to songs about Chelsea, no club seems too fussed when it comes to mocking children starving or 97 football supporters being crushed to death unlawfully.

Definitely seems an up-tick in all away fans at Anfield singing only/mostly about LFC: Gerrard, feed the Scousers, You'll Never Work Again, etc. One or two "ribbing" songs would be normal, but seems trolling LFC is more the aim than supporting/singing about their own team.

Absolute respect to Burgoyne – and other Shrewsbury fans – who have called out this nonsense ‘banter’.

This is yet another example why Hillsborough needs to be part of the national curriculum and taught in schools about the disaster itself and the subsequent police cover up.