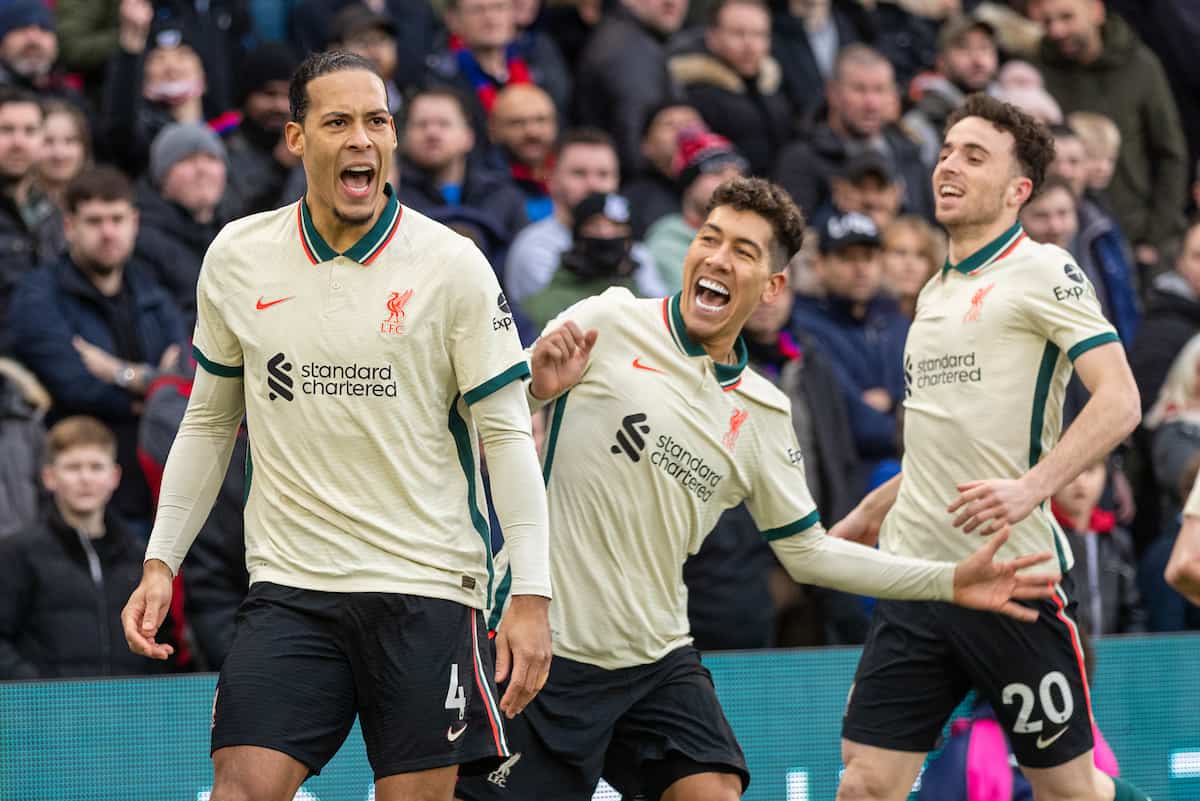 While Liverpool managed to put three beyond Crystal Palace it was the Alisson show at Selhurst Park as the Brazilian had one world-class intervention after another.

There was plenty of the feel-good factor heading back to the capital for the second time in three days, this time with Premier League points on the line.

Having seen Man City drop points the night before, capitalising was a must and the Reds, initially, did not waste time in doing so.

Alisson would be called into the fray one too many times for this Red’s liking but he was worth his weight in gold, before then being left for dead as Edouard pegged one back.

The Brazilian was by far and away Liverpool’s leading man and his compatriot in Fabinho made sure his excellent interventions came in a victory after tucking away a hotly debated penalty.

Alisson was, rightly, the talk of the town…

Alisson is just a cheat code.

alisson effectively has a hat-trick today

Another match typifying the difference Alisson and Van Dijk have made to Liverpool… years on. A gritty performance, far from plain sailing. Big players stepping up. #LFCdigest

Very hard fought and slightly lucky win but a win nonetheless while missing a number of top players. The way Palace turned the game around after the first 30mins was impressive and we relied on the brilliance if our keeper not to drop points. Ali Motm.

Easily up there with the best performances Ali has put in for Liverpool.

The guy makes so many saves look easy — when they look like worldies, you can guarantee they’re tough.

Jurgen Klopp spoke on Friday about the importance of his team being “rock solid” while their goal threat is reduced in the absence of Sadio Mane and Mohamed Salah. Liverpool definitely weren’t that today but they have the best goalkeeper in the world, which always helps.

Alisson looking like the Brazilian Lev Yashin with that performance in his all-black kit today ?? pic.twitter.com/VbaP9sM2bS

That's why you pay the big money for a keeper. Alisson was absolutely pivotal there

It was stressful, but it’s 3 BIG points…

#LFC have to be thankful to Alisson there. Palace dominated that second half and probably deserved a draw. Still, big 3 points.

We were lucky in that second half but who cares.

Three points, three one, the gap to the top closed to nine points (three wins), the Reds with one game in hand. I think most Liverpool fans would have taken that at this place a few days after booking a Wembley final spot and with key players still out of contention.

Up the whatever colour that shirt is. Great result, iffy performance. But that’s fair enough after (basically) the same team played Thursday night. Onward.

Slightly lucky win but I'll take it. We've suffered some extreme variance this season so nice for it go the other way. #lfc

The best and worst of Liverpool there. Imperious for 30 minutes but lost all control after the break and probably lose if not for Alisson. A big 3 points regardless.

Good win for Liverpool that. Passed & pressed brilliantly for 30 minutes but thought they looked mentally tired after that, gave the ball away with too many sloppy passes. But on days like this having a world class keeper makes the difference & Alisson did ?#CRYLIV #LFC

The result was a needed one to keep even the faintest hopes of catching Man City alive, thank you Ali, with the deficit now at nine with Klopp’s side having played a game less.

There’s a flicker of a chance and while it is the hope that kills you, with 16 games left to go the Premier League could very well throw up curveballs that favour Liverpool.

Now, it’s time for a small break for most of the squad before then returning to face Cardiff – at which time the likes of Thiago, Harvey Elliott and potentially all three AFCON representatives could be back.