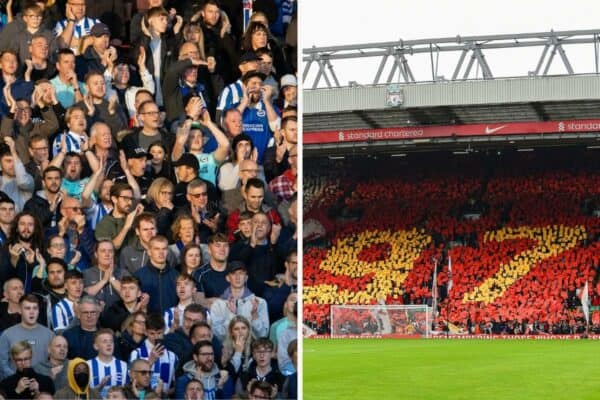 Brighton are the first Premier League club to join Liverpool in backing the Hillsborough Law Now movement, which has led to widespread praise from those affected.

On Friday, a gathering of politicians from across the political spectrum, including two former Prime Ministers, bereaved relatives, trade unionists and the victims of other historic injustices gathered to demand the introduction of a Hillsborough Law.

In a matter of days, the campaign has drawn widespread support on social media, and now Brighton & Hove Albion have become the first of hopefully many Premier League clubs to publicly back the campaign.

In a powerful statement, published on the club’s official website today, the Seagulls declared they were proud to stand in solidarity with all those affected by the Hillsborough disaster, and Liverpool Football Club.

“Brighton & Hove Albion are proud to add their support to the campaign to launch a Hillsborough Law to provide transparency to bereaved families and rebalance the scales of justice in the UK.

“The new law, proposed in 2017 by the Hillsborough families and survivors, and championed by the Mayors of Liverpool and Manchester, Steve Rotherham and Andy Burnham, seeks to compel all public officials to be truthful at inquiries into public tragedies.

“It also aims to ensure bereaved families have access to adequate public funding to support their quest for answers.

“We stand in solidarity with all the families who lost their loved ones at Hillsborough on 15 April 1989, or as a result of the tragic events; the survivors and Liverpool Football Club – who have carried themselves with such dignity for almost 33 years in the search for truth and justice – and call for a Hillsborough Law Now.

The club also plans to publish their message of support in their matchday programme on Friday for the visit of Crystal Palace to the Amex Stadium.

This is Anfield understands that Brighton CEO Paul Barber was particularly keen to express his solidarity and support for the families of the 97 and Liverpool Football Club.

Ian Byrne, the MP for Liverpool West Derby Constituency, was keen to express his gratitude to Brighton. Ian told This is Anfield: “This is a brilliant show of solidarity from Brighton, a football club that understands the meaning of the word and has shown it once again with its support for a Hillsborough Law. We now need every club and their supporters to back the call and make it impossible for this Government to ignore it.”

Responding to the move, Joe Blott, Chair of Spirit of Shankly, who had been at Hillsborough in both the 1988 and 1989 FA Cup semi-finals, had this to say:

“I can’t speak on behalf of the bereaved or their family members left haunted, alone and often vilified for over 30 years, they do that brilliantly with composure and humility but I can tell you one small story that has lived with me this whole time.

“Being at the stadium was numbing but you also felt powerless, because you could see what was happening but the police, the FA and stewards were adamant that once the pitch was cleared the game would continue.

“We asked if we could get onto the pitch to help, we were told in no uncertain terms to stay where you are.

“As we watched fans carry fellow fans on advertising hoardings we knew but didn’t know. Eventually, the game was called off and we left the ground to the rumours of the numbers of dead and injured.

“About 10 miles from Sheffield we found a telephone box, and we rang home. My mum answered the phone and simply shouted ‘Joe’s alive’. She’d been watching the disaster unfold on TV, aware of far more than me, even though I’d been at the match.

“That’s when it hit me, I was alive but clearly others weren’t. Others weren’t ringing their mum. Their mum wasn’t getting that call.

“This is why the Hillsborough Law is so important. It took the families of the bereaved 30 years to effectively receive that phone call. In any civil society that is not right, for the victims and relatives of any disaster.

“On behalf of Spirit of Shankly and myself, thank you to all at Brighton & Hove Albion FC for your compassion, values and leadership in supporting this campaign.”

Hillsborough is just one in a long line of historic injustices suffered by many at the hands of the British State.

At Friday’s event, powerful contributions were heard from families of 22,000 UK service personnel who suffered deadly radiation poisoning after the Second World War, as a result of their exposure to nuclear weapons testing.

Many of them had been involved in a generational, 70-year campaign for truth and justice.

Others spoke of Orgreave, the Manchester Arena bombing, Grenfell and the campaign of the Covid bereaved, and identified similarities in the way the State responds to these cases and the experience of Hillsborough campaigners.

Steve Kelly, whose brother Mick died at the disaster in Sheffield in 1989, argued that society can no longer afford not to support the proposed new law.

Recalling how many times he has heard the phrase ‘haven’t they had enough?’ in reference to him and fellow justice campaigners, Steve suggested that the lessons of other disasters showed that all of us are vulnerable and none of us would want to spend decades fighting for justice if we were caught up in tragedy.

Meanwhile, other speakers including Steve Rotheram and Andy Burnham, the Mayors of Liverpool and Manchester, demanded that in the aftermath of a civic disaster, the truth should be told “at the first opportunity.”

It is surely an indictment of our society that the requirement to tell the truth after a civic disaster should have to be a legal requirement for public officials.

Campaigners argue that the proposed law would provide a level playing field for the victims of such tragedies, ensuring that they are properly supported by a Public Advocate, given the best legal representation and it would legally bind public bodies and individuals to a ‘duty of candour’.

Clearly, this is not about reopening inquiries into Hillsborough.

It is about protecting future generations from the kind of harm the families of the 97 and the survivors have suffered over 33 years, and as such, it would be a fitting legacy for the victims of all disasters.

In what is an enlightened move that flies in the face of tribalism and partisanship, Brighton & Hove Albion have now added their weight to this campaign.

We can only hope that the rest of the Premier League and beyond quickly follows suit, along with supporters’ groups across the country.

This is not a Liverpool issue, in truth it never was. It’s about social justice and basic human fairness – and all of us have a common interest in that.

We all owe it to ourselves and each other to support this campaign, whoever we support or wherever we live.

Sadly, the shirt on your back, the badge on your chest or the town where you live is not enough to protect you from injustice and coverups. However, a Hillsborough Law would.

Get behind it now, email your MP and demand a Hillsborough Law Now!