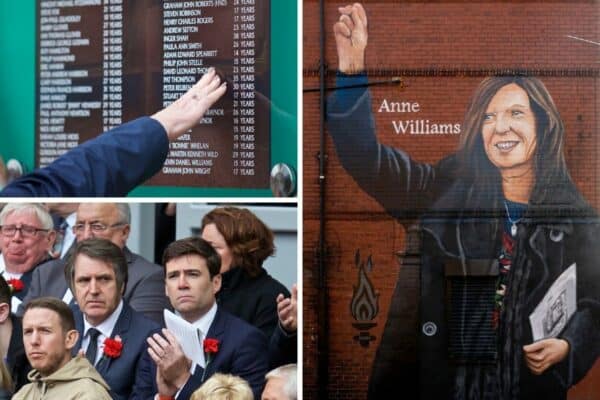 Bereaved families, former Prime Ministers and a host of high-profile public figures are to come together on Friday in an unprecedented joint call for a major re-balancing of the justice system to prevent others from experiencing the same injustices experienced by the Hillsborough families.

The ‘Hillsborough Law Now’ event will unite powerful voices from across society and the political spectrum and comes in the aftermath of the ITV drama ‘Anne’, which tells the story of Anne Williams’ fight for justice for her son Kevin.

The drama, written by Kevin Sampson, was broadcast in four parts this week, provoking a hugely emotional response.

Many people have pointed out that despite the horrific experiences endured by the families of those who lost their lives at Hillsborough and the countless survivors who struggle daily with its aftermath, promises of change have failed to materialise.

As a result, families bereaved after subsequent public tragedies continue to suffer today.

It is now over four years since Bishop James Jones published his review of the brutal experiences of the Hillsborough families at the hands of the system. The Government is still to provide a formal response.

Bishop James’ powerful report – ‘The Patronising Disposition of Unaccountable Power’ – contains 25 recommendations, which together would form the basis of a comprehensive reform of the system. The most significant of these are:

However, since that report was written, there have been further issues identified, including the collapse of Hillsborough trials meaning that today, despite a Coroner’s verdict ruling that the 97 victims of the 1989 disaster were unlawfully killed, nobody has been held to account for their deaths.

Friday’s event will call for the following changes to be enshrined in law:

The event will be co-hosted by the Mayor of Greater Manchester, Andy Burnham, and the Mayor of the Liverpool City Region, Steve Rotheram. Burnham, whose speech was interrupted by cries of “justice” at the 25th Hillsborough anniversay memorial held at Anfield, said:

“The appalling treatment of the Hillsborough families at the hands of the legal system shames our nation. But it is sadly not unique.

“From Peterloo 200 years ago to Grenfell today, ordinary bereaved families continue to be treated in a cruel and dismissive way by a justice system which favours the powerful and the connected. It is a pattern that keeps on repeating itself and it is time to break it.

“We need to level up the scales of justice in favour of bereaved families so that the truth is established at the first time of asking. We must spare families the secondary trauma that is often inflicted by cruel treatment at the hands of the system.

“Truth, justice and accountability will not flourish without a fundamental re-balancing of our legal, coronial and judicial systems. Out of respect for the Hillsborough families, we call on the Government to commit to that by bringing forward a Hillsborough Law – now.”

Steve Rotheram, a Liverpool supporter who was at Hillsborough on that fateful day in 1989 and has previously spoken of how he swapped his Leppings Lane end ticket for a stand seat just 15 minutes before kick off, said:

“What happened at Hillsborough in 1989 and the cover-up that followed is a national disgrace. It is a testament to the courage and determination of the families and campaigners that the truth was finally uncovered after decades of battling against the might of the state. That cannot be allowed to happen again.

“The story of Hillsborough is not an outlier. There are countless other injustices that follow the same pattern. It is time that we broke that cycle and put integrity back at the heart of our justice system.

“This is an issue that should be well above petty party politics. Levelling up cannot only be about big spending announcements and shiny infrastructure projects. It should also about righting long-term, structural injustices. And there are few bigger than this. Levelling the scales of justice is the very essence of levelling up.

“We need a Hillsborough Law now to ensure that ordinary people have a fair chance at getting the justice they deserve.”