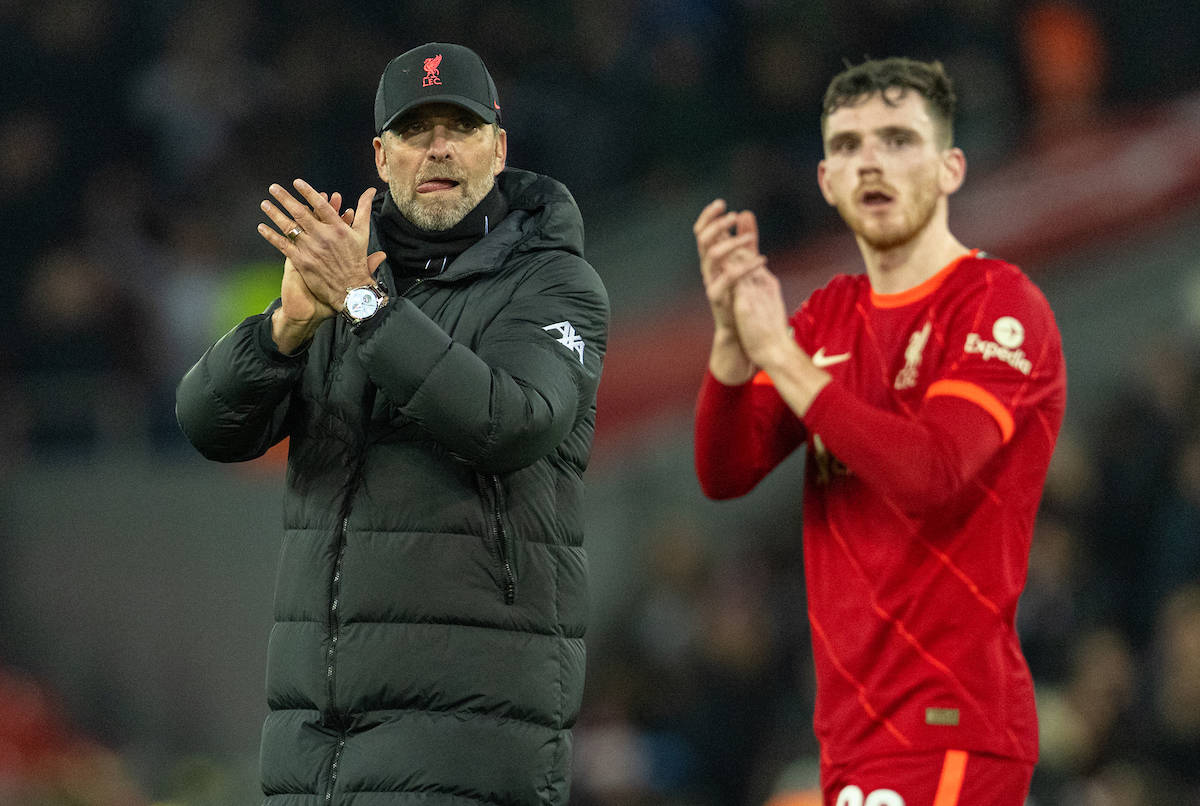 It was a night to forget against a 10-man Arsenal with Liverpool failing to penetrate behind a weakened opposition to leave the League Cup semi-final precariously placed .

That it was his first start in the competition spoke volumes of how Klopp has approached this competition over the years but in terms of shot-stopping, he had little to do.

A shaky pass early on aside, was content and confident on the ball – came off his line early throughout and brilliantly so to deny Saka, and even got himself on throw-in duty.

It was a performance that you’d expect after being in isolation from Covid and having only returned to training a couple of days ago.

A night littered with a handful of blocked shots and lacklustre corner deliveries, there were flashes of him breaking into his stride after winning the ball but everything seemed to be on a second delay.

A one-two with Roberto Firmino on the edge of the area was the energy we needed but the centre-back was one of few to provide it for what felt like most of the match.

Composed toward facing his own goal and creative going the other way, a clear standout on a night where few seized the moment.

Finally took that long-range hit fans have been begging for, it’s still yet to land.

Culpable of a few shaky moments but remained strong in the air when called upon and did show off some of his long-range passing.

The bigger story lay elsewhere on the night, namely the lack of potency that the Dutchman did look to assist with by throwing himself around in the final third late on.

Ended up going up against a third-choice right-hand-side for Arsenal after an early Cedric injury and provided plenty of energy, but was hit and miss with his deliveries.

Poor corners that did not go beyond the first man were mixed with a few delightful balls, one such leading to Xhaka’s red card. 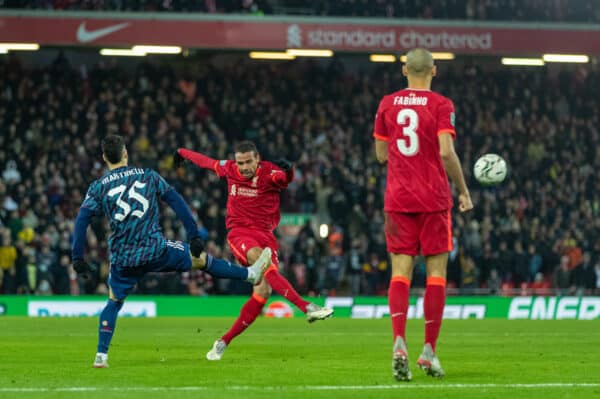 Had plenty to clean up and was the better of the midfield three, but it was not exactly a tight race all things considering.

Was tidy with the ball and recycled possession efficiently with a 91 percent pass success rate, and after four starts in succession was pulled as part of a triple change.

It was one of those nights for the skipper and the midfield as a unit, and Arsenal going down to 10-men only highlighted the shortcomings further.

A brilliant pressure on Ramsdale aside, Henderson was culpable of turning into trouble and one such instance led to Van Dijk being clattered but, thankfully, the Dutchman is a brick wall and it hurt Martinelli more.

Alongside Milner, did not provide the attacking impetus needed against the low block and a Reds outfit that were without two of their focal points up top.

Threw himself around in typical Milner fashion but the 36-year-old came under the same criticism as the captain having struggled to link the midfield with the attack.

The lack of quick ball movement killed any hopes of shifting a stubborn Arsenal, a square peg for a round hole.

His departure on the hour mark was a long time coming. 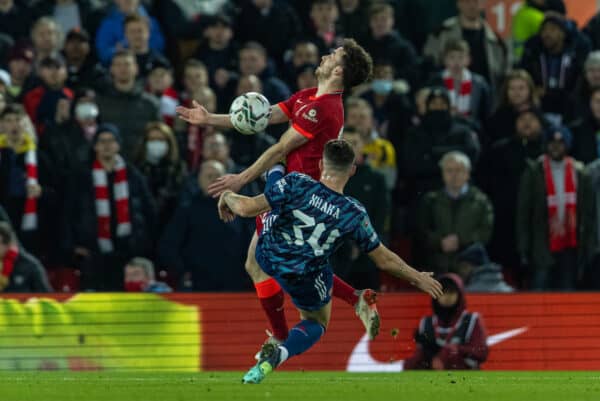 To accommodate Takumi Minamino, the right-wing was where Jota started his night and he was left to feed on scraps thanks to the struggles further down the pitch.

Was involved in a game-changing moment as his smart forward run led to Granit Xhaka being given his marching orders and had the chance for another with his aerial prowess.

The ball ended up hitting his face as opposed to him striking the ball. One of two instances that summed up Liverpool’s night that ended without a shot on target.

The League Cup has been his competition having scored in each of his appearances this season, and while energetic and eager, he did not have the finishing touch to go with it.

And his enthusiasm came to his detriment by getting in Firmino’s way during a promising mazy run in the first instance before then blazing over the bar at the death with the goal gaping.

We’ll need him this month and we definitely need more from him. 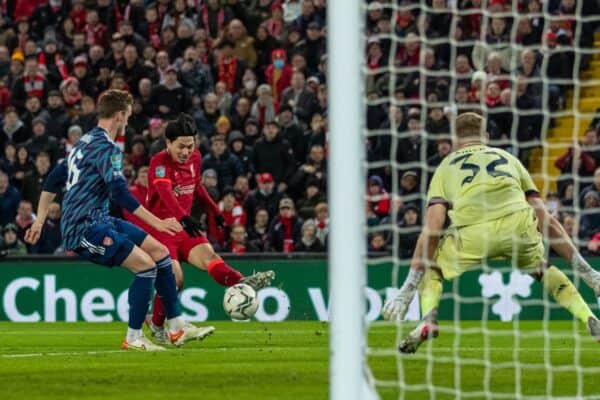 In his first start since December 22, the Brazilian was one of very few bright notes with his pressure and quick feet – always lurking within enemy lines.

Found himself in the danger areas, the few times Liverpool got that far, but the ball failed to fall kindly at the desired moment. Some promising signs for the weeks ahead, however. 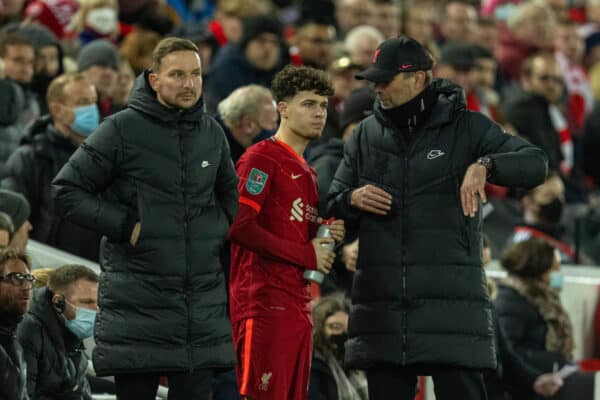 Curtis Jones (on for Milner, 61′) – 7 – Immediately injected a spark and the Anfield faithful showed their appreciation.

Neco Williams (on for Alexander-Arnold, 75′) – 6 – Readily pumping balls into the box, Ramsdale found too many but he too offered a spark that had otherwise been lacking.

Joe Gomez (on for Matip, 75′) – N/A – Sole job was to help keep up the late pressure and funnel the ball back up the pitch.

Alex Oxlade-Chamberlain (on for Fabinho, 75′) – 6 – Couldn’t fault his endeavour but the execution left a lot to be desired, but the same went for most of his teammates. 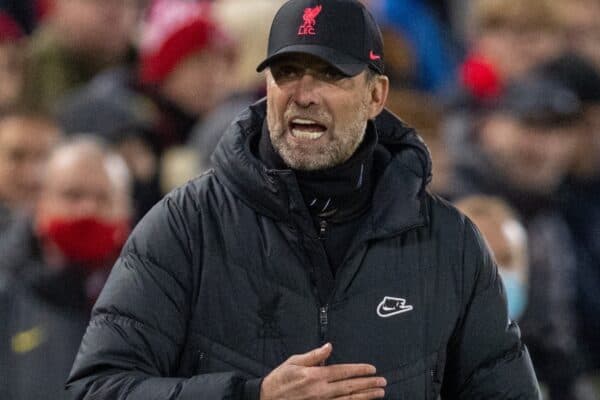 A strong XI made the manager’s intentions obvious from the off but his words of players needing to find rhythm pre-match were made abundantly clear with the performance that followed.

As it did at Chelsea, the midfield trio of Fabinho, Henderson and Milner failed to provide any forward impetus and only when Curtis Jones was called upon did that show flickers of changing.

Many will rightly argue that the changes took too long to make considering what was being played out before him, his dropped jaw and aimless stare before the break summed up the mood.

Having given up home advantage and failing to have a single shot on target against 10 men, it was simply not good enough and it will come under the category of one of the worst Klopp has overseen.

The same trajectory cannot be followed against Brentford, who will be smelling a giant killing.