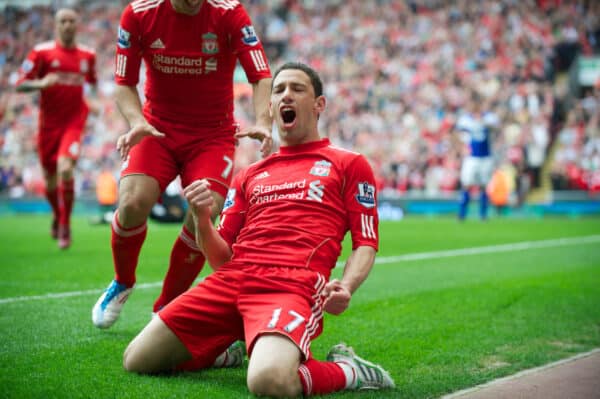 Months after his retirement with Newell’s Old Boys, Maxi Rodriguez has agreed to take part in the Liverpool Legends charity match against Barcelona on March 26.

Rodriguez received an emotional farewell after announcing his retirement in December, substitute to rapturous applause during a 0-0 draw with Banfield.

The decorated attacking midfielder ended his playing career at 40, following three spells with Newell’s, along with time at Espanyol, Atletico Madrid, Liverpool and Penarol.

He only spent two seasons with Liverpool, but he became a firm favourite among supporters during a difficult period, playing under three managers in Rafa Benitez, Roy Hodgson and Sir Kenny Dalglish.

The Argentinian scored 17 goals and assisted another seven in 73 appearances for the club, with 38 of those outings coming at Anfield.

He is now due to make his return to Anfield later this year, as the Liverpool Legends take on Barcelona in support of the LFC Foundation.

The club announced the news on Monday, with Rodriguez set to rejoin the likes of Patrik Berger, Luis Garcia, Dirk Kuyt and Steve McManaman for the 3pm kickoff on March 26.

Jerzy Dudek, Vladimir Smicer, Jason McAteer, Bjorn tore Kvarme and Phil Babb were also advertised for the tie upon its confirmation in December, while Fernando Torres was originally announced in 2019 prior to a postponement.

Javier Saviola and Edmilson have been confirmed by Barcelona, while Edgar Davids and Patrick Kluivert were previously named.

Along with the LFC Foundation, proceeds from the charity game will also go towards the Barca Foundation, Forever Reds and the Owen McVeigh Foundation among other causes.

Tickets for the Legends fixture, priced from £27 to £45 for adults, are available here.