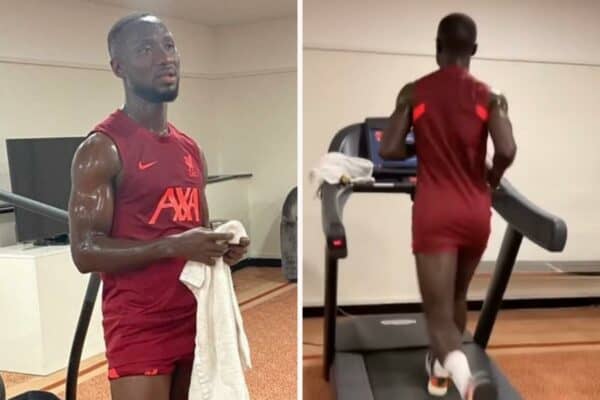 Liverpool have been boosted by the news that Naby Keita is working towards his return to action, as he looks to kick on after Africa Cup of Nations duty.

The Reds enjoyed an impressive January in the end, going unbeaten in the Premier League, securing a place in the League Cup final and reaching the FA Cup fourth round.

There were concerns regarding how much Jurgen Klopp‘s men could struggle with three key players on duty at the Africa Cup of Nations, but they passed with ease.

While Mohamed Salah and Sadio Mane have reached the semi-finals in Cameroon, Keita has returned home after Guinea were eliminated at the last-16 stage.

On Monday, the 26-year-old posted a video on his Instagram story showing him working hard on a treadmill, as he prepares for a return to action for Liverpool.

It comes ahead of the resumption of training at the AXA Training Centre later this week, with Keita expected to rejoin the senior squad ahead of the FA Cup clash with Cardiff.

Whether he features in the fourth round remains to be seen, but he should definitely be involved against Leicester next Thursday.

Keita’s last appearance for Liverpool was a second-half cameo in the 2-2 draw at Chelsea at the start of January, and the hope is that he now earns more starts upon his return.

The Reds’ midfield has been ailing at times in recent months, with James Milner and Jordan Henderson looking their age, and the No. 8’s guile and tenacity can make a difference.

As Liverpool prepare to battle across four competitions in the coming months, this is going to be a big test of Keita’s consistency and resolve.

At 26, he is at a key moment in his Reds career, with one path potentially seeing more injuries and patchy form, and the other finally seeing him reach the vast potential many feel he has.

The fact that he had an impressive AFCON – winning two Man of the Match awards – and is clearly fit can only bode well moving forward.