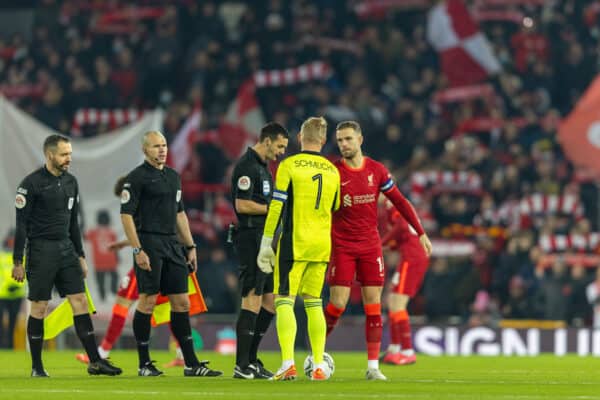 10 key things to know ahead of Liverpool vs. Leicester

Liverpool can heap further misery on Brendan Rodgers when they host Leicester after 18 days without league action, but he will be out for a third win in four matches against the Reds.

Jurgen Klopp‘s side beat Cardiff 3-1 in the FA Cup fourth round last weekend, as they completed their awkward stint without Mohamed Salah and Sadio Mane available.

A return to Premier League action is up next, with victory at home to Leicester essential in the title race.

1. Leicester on a downward spiral

Last season, it looked as though Leicester were primed to pip Liverpool to a place in the top four, prior to a poor end to the campaign.

While Rodgers’ men no doubt felt they could challenge again, 2021/22 has become more disappointing by the week.

The Foxes head into Thursday’s match sitting 10th in the table and they have won only twice in the league since the end of November.

Not only that, but they have been dumped out of both domestic cups and the Europa League – Liverpool beat them in the League Cup quarter-finals – giving them little to play for between now and May.

As was the case during his time as Liverpool manager, Rodgers appears to be suffering a third season to forget at Leicester.

Granted, injuries haven’t helped matters but there is arguably a feeling that his squad have stopped playing for him, with performances often poor.

Rodgers called out his players after Sunday’s humiliating 4-1 defeat at Nottingham Forest, but in classic Brendan fashion, his lack of self-awareness was plain to see.

It is never the Northern Irishman’s fault, not helping dispel those David Brent comparisons, and he badly needs a result against the Reds.

As stated, Leicester‘s season has been injury-plagued, with many key figures missing at different points in the campaign.

The Foxes are still without a number of absentees for the trip to Anfield, with defenders Jonny Evans, Timothy Castagne, Ryan Bertrand and Wesley Fofana all missing.

Jamie Vardy is also out, while Nampalys Mendy may not be ready after Africa Cup of Nations duty with Mane’s triumphant Senegal team.

In what seems an incredibly rare occurrence over the past couple of years, Liverpool have an almost clean bill of health.

Jordan Henderson is expected to be out with a minor back problem, while Joe Gomez and Alex Oxlade-Chamberlain have recovered from Covid but may yet still not be considered.

Meanwhile, Salah is back in quickfire time after his AFCON adventure, helping Egypt reach the final – but Mane will not feature, though, having celebrated long after Sunday’s final – he is to return to Liverpool on Wednesday evening.

All of a sudden, Klopp has a plethora of options at his disposal, which can only bode well ahead of a run of 10 games in 30 days.

Alisson will return in goal after Caoimhin Kelleher‘s FA Cup appearance, while Joel Matip and Andy Robertson could also come into the back-line.

Thiago and Harvey Elliott may still only be deemed fit enough for a place on the substitutes’ bench, but one could take Henderson’s spot.

In attack, the relentless Salah will be desperate to start and may well see his wish granted, with Luis Diaz hoping for a maiden Liverpool start.

It seems highly likely that we will see new big-money signing Diaz at some point on Thursday, as he makes his Premier League bow.

Whether or not the Colombian starts will depend on Klopp’s assessment of Salah, with Diogo Jota and Roberto Firmino looking likely to play.

If Diaz does make an appearance against Leicester, he will be looking to follow in the footsteps of the likes of Michael Owen, Luis Suarez, Salah, Mane and Jota in scoring on his Premier League debut for Liverpool.

It would be illustrious company to join.

Speaking to the media on Wednesday, Klopp urged the home supporters to create a cauldron of noise at Anfield:

“We have to create together a very special atmosphere. This last part of the season we have [11] games from now until the next international break.

“With the Cardiff game [12], but now [11] coming up and if we as a club, as a team, together with our supporters, want to reach the maximum for us, whatever that will be, we better start creating atmospheres on the highest levels.

“[Thursday] night is a good chance to do that.”

If you’re going to the game, you heard the man!

Rodgers may be a man under pressure at the moment, but he is looking to continue a good recent record against Liverpool.

Victory for Leicester on Thursday would be their third win out of four tussles with the Reds, also completing a trio of league victories in a row.

A 3-1 win at the King Power Stadium last season put the Foxes in control of their top-four destiny, while Ademola Lookman’s goal settled the league clash just after Christmas earlier in this campaign.

At least there was the aforementioned League Cup victory for Liverpool the week before!

Chris Kavanagh has been confirmed as the referee for Thursday’s match, while Darren England is on VAR duty.

Liverpool fans will have fond memories of Kavanagh’s only game in charge of the Reds so far this season, as he allowed enough stoppage time for Divock Origi to fire home the winner at Wolves in December.

Last term, he actually oversaw the 3-0 win over Leicester at Anfield, as well as the home loss to Everton and away triumph at Burnley.

Liverpool vs. Leicester is live on BT Sport 1 in the UK, with coverage starting at 7pm (GMT) ahead of the 7.45pm kickoff.

But TIA’s matchday live blog remains the best place to follow all the action – with Dan Clubbe to be keeping you entertained from 7pm!