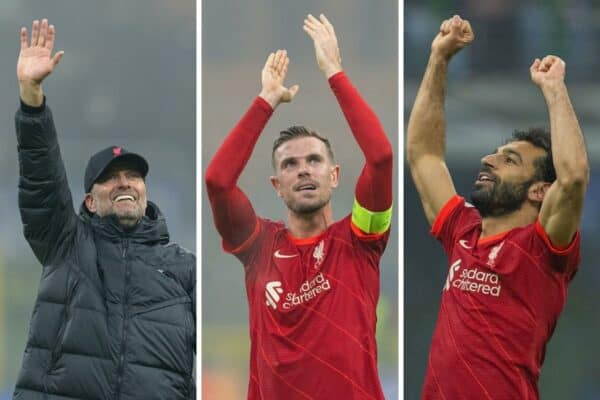 Liverpool absorbed everything Inter Milan had to offer before striking twice within eight minutes to take back a 2-0 win to Anfield ahead of the second leg.

Champions League nights were back and it was again at the San Siro for the Reds, this time with Inter Milan awaiting in the first leg of the last 16.

Jurgen Klopp hinted at injecting fresh legs and four changes to the side who notched a valuable win at Burnley followed, including a start for Harvey Elliott.

It was his first appearance in the Champions League, an 18-year-old living the dream!

What came next was a typical European tie, edgy with half-chances for both teams but no shot on target – despite Sadio Mane‘s best efforts with a bicycle kick or two.

Inter would bite back at the start of the second half and Jurgen Klopp acted, making an inspired triple sub with Jordan Henderson, Naby Keita and Luis Diaz all arriving on the scene.

It swiftly wrestled back the momentum and it was half-time substitute, Roberto Firmino who gave Liverpool a vital advantage with a beautifully placed header. Inch perfect.

Give the ball to Bobby and he will score!

And now to be outdone, Mohamed Salah put himself on the scoresheet for the 24th time this season having acted quickly to get on to the end of a loose ball.

Through some legs with a slight deflection and it was 2-0 to Liverpool in the space of eight second-half minutes.

The wind was out of Inter’s sail and Liverpool’s advantage was not to be pegged back, with Klopp’s men denying the Italian’s a single shot on target.

A classic European performance from the Reds in the end with Anfield now awaiting on March 8 for the second leg, before then though there was plenty of applause for the travelling Kop.

A huge step in putting one foot in the quarter-finals but the job is not yet done, but before the Champions League becomes the focus once more, there are five games to navigate.

It all starts with Norwich on Saturday. Up the Reds!