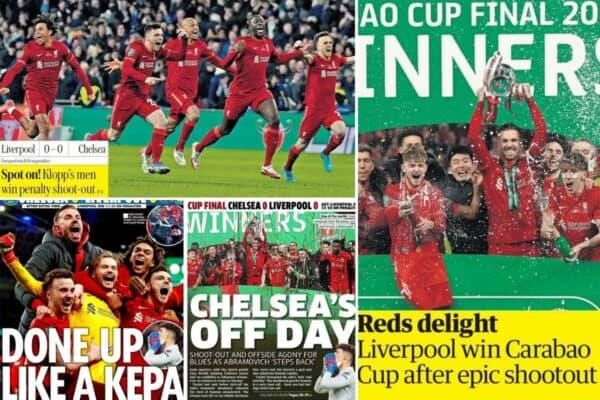 The watching media dissected a memorable League Cup final victory for Liverpool against Chelsea, with Caoimhin Kelleher a major area of focus.

The Reds clinched their first League Cup crown since 2012 on Sunday, as they beat the Blues after a pulsating clash at Wembley.

The game may have finished 0-0 after 120 minutes, but there were countless chances and disallowed goals, with both teams enjoying spells of dominance.

In the end, it was Liverpool who prevailed 11-10 in the shootout, with Kelleher scoring from the spot and his opposite number Kepa Arrizabalaga missing.

Here’s a look at how the media reacted to the Reds’ latest trophy win.

A memorable Liverpool win was lauded by many…

“The Carabao Cup trophy used to be a permanent fixture at Anfield, and it is back in the Reds’ possession once more.

“The first leg of a potential quadruple is in the bag, for Jurgen Klopp and his team.

“They and their fans went through hell to get there, mind. This will go down as one of the most incredible football matches – never mind finals – in living memory.

“Where do you even begin to unravel what we witnessed here today at Wembley?”

Mark Jones of the Mirror hailed a “classic” contest, too:

“Ignore the lack of goals in normal time, this was top level football at its finest and Chelsea and Liverpool went toe-to-toe yet again, with the match just as frantic as January’s meeting at Stamford Bridge.

“These two used to meet in high stakes matches that were controlled by Jose Mourinho and Rafa Benitez, and while they could also be compelling in their own way, Thomas Tuchel and Jurgen Klopp are a different breed of boss who get their teams to play on the edge.

“Chances, horrendous misses and excellent saves came and went, and it made for a classic final despite the lack of (legitimate) goals.”

The Mail‘s Ian Ladyman was in awe of the quality on show:

“After 120 minutes of compelling football and a shoot out of impeccable quality and sureness, was this a suitable and fitting way to decide it all? It is hard to say what it was.

“This was some afternoon and early evening at Wembley. Two heavyweights of the English game bashed heads relentlessly for the duration of the initial hour and a half and with only marginally less ferocity during the extra thirty minutes that followed.

“Liverpool ultimately left north London with only their second domestic cup in sixteen years and it will mean all the more to them because of that.”

Kelleher had a day he will never forgot…

The Independent‘s Melissa Reddy loved the narrative surrounding the youngster:

“Perhaps it was a touch of destiny given the pre-match attention on who would be selected in-between the sticks at Wembley. Jurgen Klopp had declared early that Caoimhin Kelleher would keep the gloves in this competition with the 23-year-old proving a mature, assured back-up for Alisson.

“It was a lovely reward for the Republic of Ireland international, especially considering his steel when called upon to protect Liverpool’s goal last season amid a severe injury crisis that saw him stationed behind a midfielder as centre-back, or the Nat Phillips and Rhys Williams experiments.

“Still, it was a ballsy call from Klopp – without a domestic trophy to his name in England and with this great Liverpool side knowing they haven’t amassed enough silverware.”

“Manager Jurgen Klopp made it clear as soon as Liverpool reached Wembley that Kelleher would retain his place as the Reds’ goalkeeper in this competition ahead of first-choice Alisson.

“It was a decision laced with an element of risk but the 23-year-old repaid Klopp with a complete performance that included scoring Liverpool’s 11th and final penalty.

“This was a small element of a remarkably assured performance that started with a crucial early save from Christian Pulisic and also saw him deny Chelsea a last-gasp win with a near-post block from Romelu Lukaku in the closing seconds of extra time.

“Kelleher was composed in every aspect of his game as he dominated his area and handled everything that came his way, confirming his growing reputation as a goalkeeper of high promise.”

The Guardian‘s Andy Hunter said the faith shown in the Irishman paid off handsomely:

“When Trent Alexander-Arnold and Harvey Elliott converted their penalties in Liverpool’s flawless shootout they turned and pointed at a 23-year-old goalkeeper making the 17th start of his senior club career, and who just happened to be the calmest person inside Wembley.

“If it was a risk selecting the inexperienced Republic of Ireland international over a goalkeeper that Klopp has labelled the best in the world, it never showed. Kelleher, a most laid-back character, made a crucial save from Romelu Lukaku at the end of normal time and held his nerve throughout.

“The first of what Liverpool hope will be four trophies this season was a true collective effort, with 29 players used in the run to the final including all three senior goalkeepers.

“Klopp wanted Kelleher to taste the high life not only as a reward for his impressive displays throughout the competition but to ensure his head his not turned by offers to play more regularly elsewhere. The final was therefore a resounding success for Liverpool as they secured a record ninth win in the League Cup.”

Now how about a quadruple?

Jones believes this could be the start of something special:

“They enjoyed themselves here, but they know that there could be so much more to come.

“Manchester City are in their sights in the Premier League, and they will fancy their chances of going deep in both the Champions League and the FA Cup, too.

“That is for tomorrow, though. Today, it is time to celebrate.”

This Is Anfield echoed that sentiment:

“To vaguely paraphrase the great Ronnie Moran, here are your medals boys, now go and get the next one. We’ve won nine League Cups, more than anyone else in history, and this was an absolutely big and necessary triumph.

“But it isn’t what our season is about and there’s more ahead to go for.

“Another big league game and the Champions League second leg against Inter are the immediate challenges, and the wins just have to keep on coming – it’s 10 in a row now if this counts as a victory ultimately.

“We should definitely be targetting a domestic cup double, but the two very biggest prizes should be on the cards too.”

Finally, Paul Gorst of the Liverpool Echo was also confident about the win leading to more glory:

“While this is the first time that Klopp’s Liverpool have been able to physically lift silverware in front of their own fans on domestic soil, this could simply be the one that gets the ball rolling on the most incredible period ever at Liverpool FC.

“That is not a statement that is uttered lightly, either.

“How good must it feel to know that all of this Wembley colour and cheer could merely be the glorious prelude to the most sensational conclusion of any season of any era at Anfield?

“There’s a lot of football to be played before that tantalising prospect is a reality, but the naked fact that a truly unprecedented quadruple is still in sight at the start of March will whet the appetite for what could genuinely be halcyon days, even at this most storied of football clubs.”