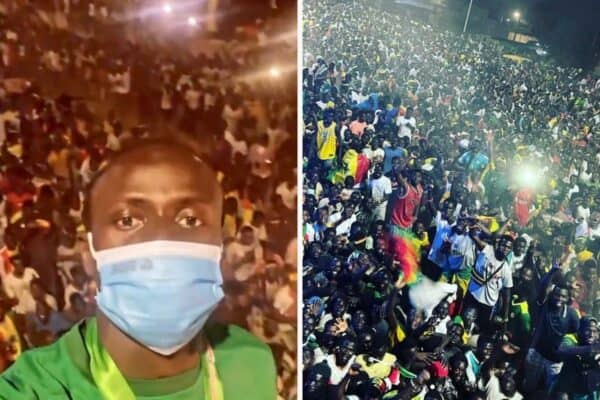 While Mohamed Salah returned to Liverpool early, Sadio Mane joined his Senegal team-mates for a bus-top trophy parade after winning the Africa Cup of Nations.

Mane was the hero as Senegal beat Egypt in a shootout in Sunday’s final, making up for a missed spot-kick in normal time to hammer home the winning penalty.

The 29-year-old has described it as the “best trophy of his life,” and the significance of his country winning the AFCON for the very first time was displayed the day after.

Thousands upon thousands of Senegal supporters lined the streets in Dakar to welcome Mane and his team-mates home, with the Liverpool forward sharing a series of videos of his view from the roof of the bus.

Senegal's trophy parade celebrations after winning the Africa Cup of Nations! What scenes in Dakar ??? pic.twitter.com/lXuHM2TTFE

“Any better feeling! Incredible. Never seen it before,” he wrote. “Really proud moments.”

Mane was, of course, part of the incredible parade after Liverpool won their sixth European Cup in 2019, but to bring home the AFCON trophy is clearly a dream come true for the forward.

The clamour from fans to get a glimpse of their heroes is truly heartwarming, showing the importance of football to communities around the world.

Aliou Cisse “ I dedicate this victory to the Senegalese people, for years we have been chasing this cup. Today we will be able to put a star on our jersey. “ #TeamSenegal pic.twitter.com/YcTyhIVZa5

Mane is due to return to Liverpool later this week, and though it is unlikely, could be in contention for the visit of Leicester in the Premier League on Thursday night.

The Egypt captain, Salah, has already arrived back in the city and is planning to rejoin training on Tuesday, with the Guardian‘s Andy Hunter explaining that a “light recovery session” is scheduled.

However, his place in the squad against Leicester is “not guaranteed” as Liverpool want to “assess the forward after his recent workload and heavy travel itinerary.”

This comes after Egypt took all four of their knockout games at AFCON into extra time, with Salah playing 480 minutes of football in just 12 days.