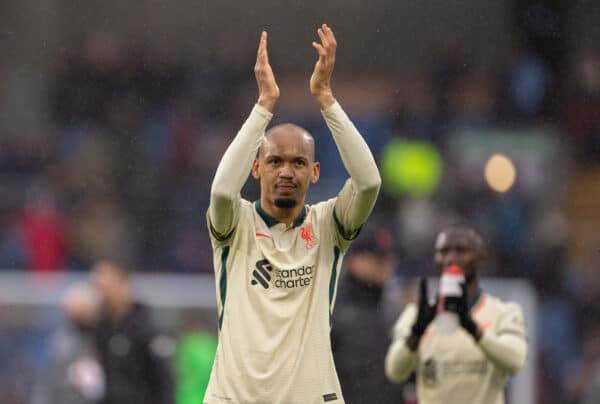 Fabinho was the focus for fans after Liverpool’s tough 1-0 victory over Burnley, with the Brazilian scoring the winner at Turf Moor to bring his season’s tally up to six.

Before this season, Fabinho had only netted three times for the Reds; his record for goals in a single season was two, that being in 2019/20.

With a well-taken effort from a Trent Alexander-Arnold corner on Sunday, though, the No. 3 has now doubled his output for the previous three campaigns in just 27 games this term.

It was a deserved victory for Liverpool, albeit a hard-fought one as they survived the difficult conditions and a battling opponent to take the three points.

Jurgen Klopp‘s side were far from their best, but taking to social media after the game, supporters made sure to laud Fabinho for his strike:

Oh my Fab , you are Fabulous

FABINHO is actually a natural goalscorer in 2022, 5 goals this year ?

Fabinho since the start of the year…. pic.twitter.com/sFBVsykgH0

Fabinho ever since Salah and Mane went to AFCON pic.twitter.com/cUZ4bEwdhb

Someone needs to tell Fabinho that Sadio and Mo are back pic.twitter.com/r9r1F1gAjT

Inter Milan (A) next.

No player has scored more goals for Liverpool in all competitions in 2022 than Fabinho (5). #LFC #BURLIV

Fabinho has more G/A this season in the league than Chelsea's record signing pic.twitter.com/6pn3HcpEwa

It is a hugely impressive record for Fabinho who, though an accomplished penalty taker, has never been regarded as a real goalscoring threat throughout his career.

Liverpool now have seven players with at least five goals already this term, having only seen four break that figure in the previous season; it is the same amount as in the entirety of the title-winning campaign.

Klopp cannot rely on Fabinho as a regular goalscorer, of course, with his role focused deeper in midfield, but it is a bonus that the 28-year-old is finding the back of the net on a frequent basis this season.

Particularly if those goals seal three points in a slog at Turf Moor!