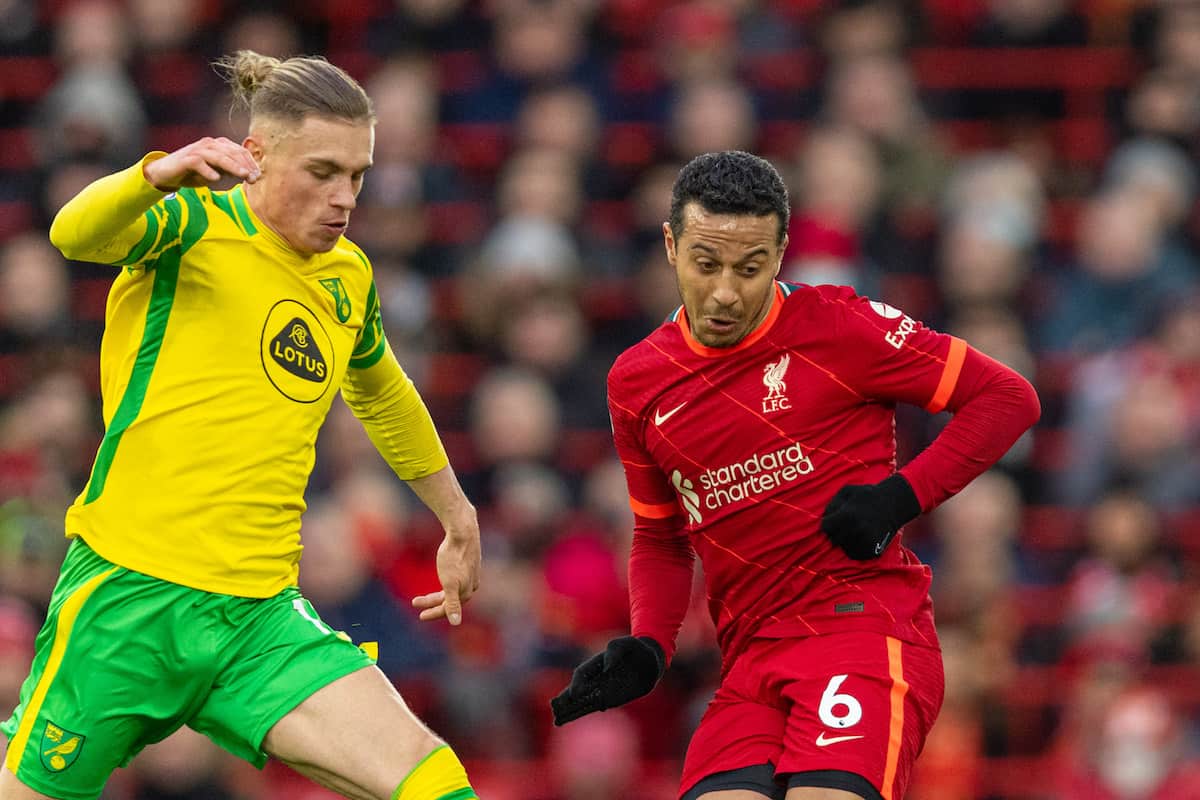 Within two minutes of his introduction Liverpool were back on levelling footing, and within five the Reds were ahead. And it saw Thiago receive mass praise from supporters.

The Spaniard started on the bench against Norwich as Jurgen Klopp made seven changes from midweek, opting to keep things fresh while he has the ability to do so.

Norwich, however, were eager to force Liverpool off their tracks and Joel Matip‘s outstretched leg helped them do so before the manager turned to Thiago and Divock Origi.

What followed was Liverpool seizing back control, upping the temp and recycling possession with intent and impetus, which had not quite been the case before the No. 6 arrived on the scene.

Thiago‘s injuries and illnesses have forced Liverpool to be without him too many times than desired, but he’s simply magic when he is on the park and it was the same again on Saturday:

I’m at the Paul McGrath point with Thiago. Don’t let him train or move out his house to avoid injury. Just play games, that’s it. #LFC

Have to say, Thiago has turned this game completely. Drive and desire in the middle to get on the ball and get Liverpool moving forward has energised them, and blown Norwich away.

For the umpteen time Thiago Alcantara is an absolutely glorious footballer. You'd have to severely question the footballing intelligence of anyone that thinks otherwise.

The best goalkeeper and the best forward in the world. And my god, Thiago is a beauty isn’t he? pic.twitter.com/6LxddP9dJV

My heart goes out to all those who said Thiago harmed Liverpool’s style of play. What a knock they’ve taken over the last week alone.

Thiago Alcantara was absolutely outstanding when he came on. A truly special player ?

Is there any sort of organization and or religious movement dedicated to Thiago Alcantara? Im open to being tithed by this.

Can we somehow ensure Thiago never misses a single minute of football for Liverpool ever again.

The impact he's had here is immense.

Thiago Alcantara. What a footballer. #LFC

A world-class operator and one that can be the difference-maker for Liverpool this season, his influence is shown in abundance whenever he is on the field.

It was 30 minutes for him against the Canaries but 30 minutes that he grabbed the game by the scruff of the neck toward all three points.

He has 18 appearances so far this season and the hope is that number will be bolstered significantly as the Reds continue their fight across all four competitions.