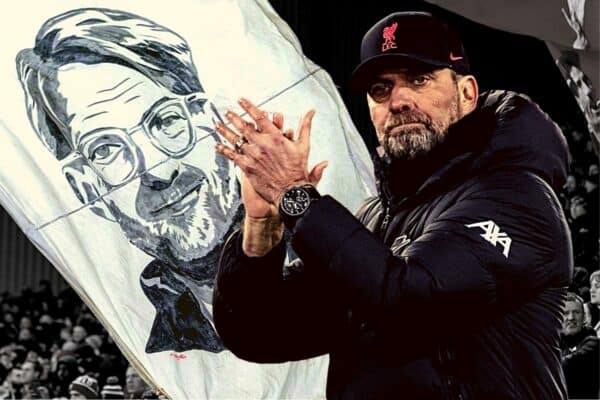 The last time Liverpool had a full week between fixtures was the end of January, and Jurgen Klopp‘s side have produced a near-flawless run in the 13 games since.

It has been an exhausting, testing run, but somehow, Liverpool have got through it in the best way possible.

The 13 days off between the 3-1 win at Crystal Palace on January 23 and the visit of Cardiff in the FA Cup fourth round is the longest break the Reds have been given in two months.

Even that ignores the fact that, during that break in games, Alisson, Fabinho and Takumi Minamino departed on international duty, while Mohamed Salah, Sadio Mane and Naby Keita were already at the Africa Cup of Nations.

Upon resumption, Liverpool embarked on a spell of 13 games in 43 days, averaging a fixture every 3.3 days for over a month.

It was held up as a do-or-die run for Klopp’s side; one that could spell either success or failure over four competitions.

The end result? Twelve wins from a possible 13, the only defeat moot as they still progressed to the Champions League quarter-finals.

So, with Liverpool reaching the March international break with an opportunity to add Premier League, Champions League and FA Cup silverware to the League Cup, how did they manage it?

Two games into that 13-game run, after the 2-0 win over Leicester, Klopp reflected on a rare scenario for his squad with no injuries to work around.

“It is always the same, but we didn’t speak about these kind of things very often because we didn’t have it very often,” he told reporters.

“But now it looks like in the moment we have it for once, so now let’s just use it.

“That’s the plan and let’s use it as smartly as possible, so that we can really bring all the energy and all the quality we have in each of these games on the pitch and be good enough to win them.”

With Luis Diaz arriving, Harvey Elliott and Thiago back from long-term injury and the trio of Salah, Mane and Keita all returning from the AFCON, Liverpool suddenly had genuine quality in depth.

Klopp was true to his word, too, with a combined total of 63 changes made to his starting lineup over the course of those 13 games.

From the visit of Cardiff to the trip to Forest, Klopp made on average 5.3 alterations to his side every game – the fewest between any games being two and the most being 10.

The majority of players were given minutes, and the manager was able to rely upon his fringe figures to make an impact when called upon – such as Caoimhin Kelleher, Joe Gomez, Divock Origi and Takumi Minamino in the cups.

“It’s not a massive problem, to be honest, to find the right lineup,” Klopp said after the penultimate game of the run, winning 2-0 win at Arsenal.

“It depends on the moment and stuff like this, who played how many minutes – if you have the chance, it’s the first time we have it.

“Usually, years ago, [in attack] it was like Sadio and Mo played all the time and Bobby pretty much all the time or Divock played.

“Maybe that’s the reason why we were never in more competitions, just two or whatever.”

Looking at the raw data, there is a clear and undeniably key factor behind Liverpool’s winning run.

Over those 13 games, the Reds scored 25 goals – an average of 1.9 per game, which is considerably lower than their rate in the 34 games previous, that being 2.6 per game.

But more importantly, Liverpool conceded just four times across those 13 games, keeping eight clean sheets along with a shutout over 120 minutes in the League Cup final.

Klopp’s side shipped just 0.3 goals per game during that period, having let in 0.8 per game in the 34 previous fixtures with 17 clean sheets (one every two games compared to one every 1.63).

Quite explicitly, Klopp put defence first to grind through that difficult run.

“We had to readjust it, to be honest, early January. We had to agree on defence first.

“Today we won 2-0, but we had games where we won 1-0 and we wouldn’t have won these games if we were not defensively spot on.”

It is a far-cry luxury considering the ills of last season, and, despite his considerable changes throughout the last 13 games, there has remained a measure of consistency in his selection.

A bit of luck

Building a solid foundation and shuffling the pack around that is all well and good, and it certainly paid off for Liverpool.

But Klopp will be under no illusions that luck played a part in coming through February and March unscathed.

For example, while Liverpool fans were rightly baffled that Brighton‘s Robert Sanchez escaped a red card for wiping out Diaz, Forest supporters felt they had a strong penalty claim as Ryan Yates dragged his leg into Alisson.

Without focusing on specific instances, though, it is clear that the Reds, as with any other successful side, have benefitted from an element of fortune.

In the 1-0 win at Burnley, Alisson was required to make more saves than in any other game so far this season (five), while the 1-0 victory over West Ham saw him produce his joint-second most (four).

However, in only one other game so far this season did Liverpool see their opponents fire more shots off target than the Hammers did at Anfield (nine).

“We knew we needed some luck in these moments and some proper defending in a way but I think it is difficult to deny them [chances] over 95 minutes,” Klopp explained after that win.

“When you win 12 in a row then you can’t only win the ones when you are flying and today we were not flying, we had to dig deep and that’s what the boys did.

“It’s necessary to get something out of this season and so we keep on going. No time to rest.”

No time to rest indeed, as though Liverpool are technically on a 12-day break between games ahead of the visit of Watford on April 2, Klopp has seen 15 of his first-team players head out on international duty.

Upon their return, the Reds face up to nine games throughout April alone – the current schedule sees a game every 3.6 days next month – including the Champions League quarter-finals, an FA Cup semi-final and an all-important title clash with Man City.

If his side are to keep pushing for trophies two, three and four for this season, it is likely that Klopp will need to employ the same tactics that clinched this impeccable run over the last two months.