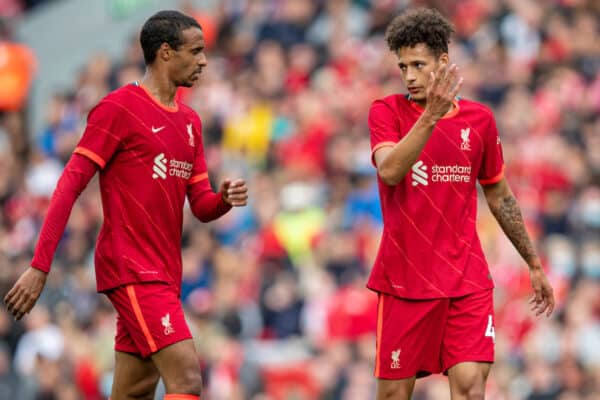 2 possible Liverpool lineups vs. Norwich – with a first for the season

Jurgen Klopp is likely to make almost wholesale changes for the visit of Norwich in the FA Cup, which lands three days after the intense victory in the League Cup final.

The euphoria of Liverpool’s late win over Chelsea on Sunday evening, after two hours of football and 22 penalties, will need to be parked already.

Three days later and the Reds are back in action for the fifth round of the FA Cup, with an injury-hit Norwich making the 250-mile trip to Anfield.

Klopp has accepted that he will “have to make changes” for this tie, and there is a chance that the entire side that lines up in midweek is different to that which took to the field at Wembley.

So who could make the lineup against Norwich?

In his pre-match press conference, Klopp gave the following updates in terms of his squad:

Given the toil at Wembley on Sunday, it is highly unlikely that any of the 10 outfielders who started in the final will keep their places against Norwich.

Instead, a very strong substitutes’ bench could be available.

One player who could be retained is Caoimhin Kelleher, given his status as Liverpool’s cup goalkeeper, but the strain of the final may see Klopp revert to Alisson – while in front of him, it could be a mix of youth and experience:

However, there are other factors to consider, namely Bradley’s possible involvement in the UEFA Youth League last-16 clash with Genk earlier in the day.

If the right-back is deemed better off being involved in that European knockout tie, Klopp could turn to Rhys Williams for his first appearance of the season.

Furthermore, this game may be used to improve Diogo Jota‘s fitness, which could see Elliott drop out:

Those alterations would see the Reds shape up as below:

Though they were given Monday off to recover, every precaution will be taken with those who started in an exhausting final, meaning this fifth-round meeting can be used to show off Liverpool’s squad depth.

It will then be up to those called upon – potentially including Williams on his first outing since May – to prove themselves against Premier League opposition.