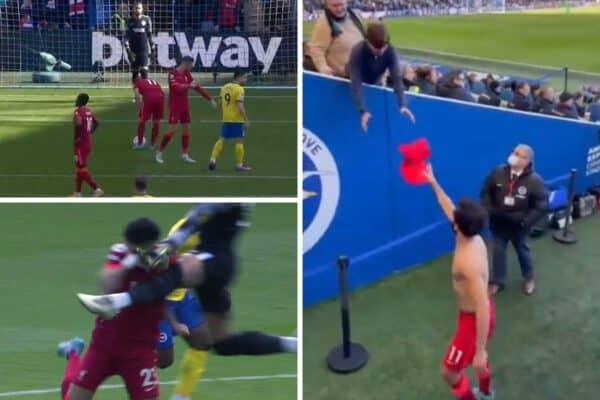 Liverpool fans spotted Jordan Henderson‘s new role as ‘bodyguard’ and a kind gesture from the injured Mohamed Salah during Saturday’s 2-0 win at Brighton.

The Reds battled for an eighth consecutive Premier League victory this weekend, with Luis Diaz‘s header and a penalty from Salah enough to take the three points.

It was a tough game at the Amex, but one that again showed the mentality within Jurgen Klopp‘s squad as they look to push Man City every step of the way in the title race.

While the possession was shared evenly between the two sides, Liverpool dominated Brighton with 18 shots to eight, and the 90 minutes seemed to whiz by once the lead was established.

But there were many little stories being told on the south coast – and here are three things fans spotted.

This season has seen a sharper focus taken on set-pieces, with Liverpool employing specialists neuro11 to improve the mental process around penalties, free-kicks and corners.

Salah is one of those who has worked extensively with the German duo, and Saturday saw the Egyptian take his eighth penalty of the season.

Analysing Salah’s approach to spot-kicks, it is clear that he utilises breathing techniques, but football psychologist Geir Jordet has spotted the role Henderson plays, too:

Sometimes, leadership is simply about being aware of potential threats to your teammates & physically present to help. This season, Jordan Henderson has increasingly acted as penalty taker BODYGUARD, to protect Mo Salah against opponent mindgames. Here's how this plays out. 1/4 pic.twitter.com/ilmmhOIV9F

Against Brighton, Henderson took up position to literally cover Salah’s back, so Salah could dedicate his full focus on the penalty kick. One might expect the referee to control these mindgame attempts, but he is only one person and often preoccupied elsewhere. 2/4 pic.twitter.com/wGrL6EWbb5

Jordet pointed out how Henderson even pushed Brighton striker Neal Maupay out of the way as he attempted to get into Salah’s head, with it clearly an important role.

This allows Salah to focus solely on converting the penalty – with as few distractions as possible.

Does a Premier League game ever go by without exposing the ineptitude of the officials in charge of them?

On Saturday, it came as Brighton goalkeeper Robert Sanchez collided with Diaz after he headed in the opener, with an outstretched leg and arm clattering into the Colombian and leaving him on the turf.

Despite the clear and obvious ‘serious foul play’, VAR official Stuart Attwell decided not to send referee Mike Dean to the pitchside monitor to assess the situation.

As it turns out, this is not the first controversial incident concerning Liverpool, Brighton and Attwell:

But are we even surprised anymore?

Salah’s afternoon ended in frustration despite the win as he was forced off midway through the second half with a knee injury.

It came in a weekend that saw increased scrutiny over his contract situation, not helped by the interference of his agent, Ramy Abbas Issa, who has used the press to put pressure on the club.

But as he made his way down the tunnel for treatment, Salah still had time for one young supporter, handing him his shirt:

A small gesture for Salah – particularly given those new wage demands! – but one that will have made that fan’s day.