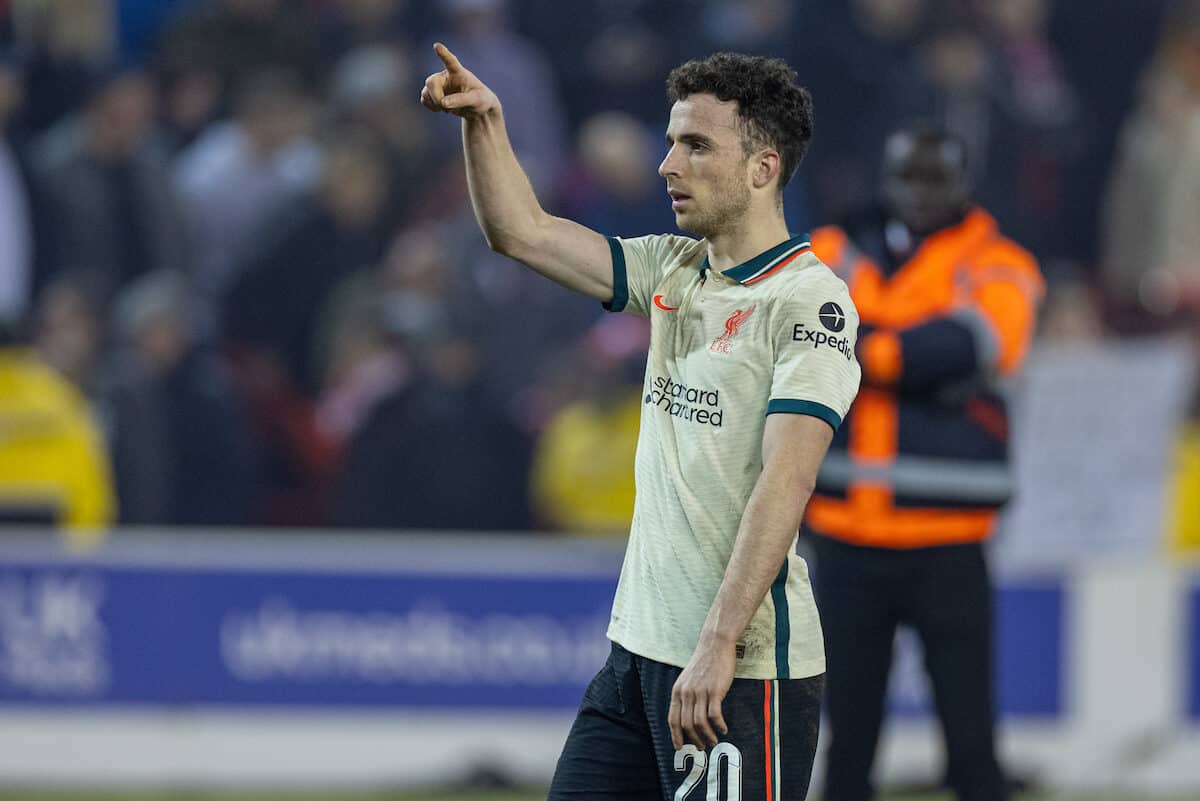 The Reds are heading back to Anfield South after just about edging past Championship side Forest, but matchwinner Diogo Jota‘s performance was quite the conundrum! 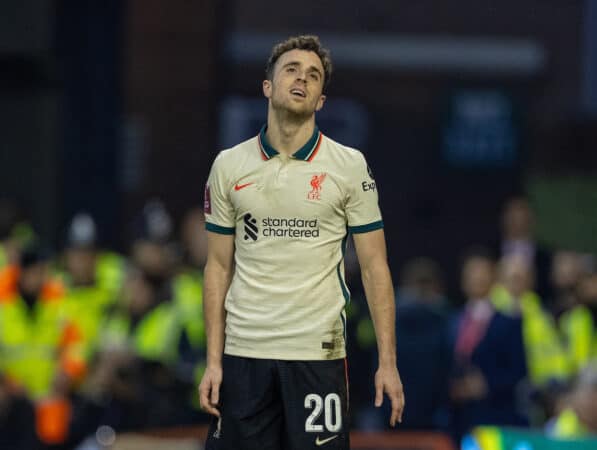 Diogo Jota‘s form, a concern? He has been back from injury for half a dozen games now and his absence wasn’t that long to begin with, but the forward is way off the pace.

Take away that goal against Arsenal (just for one second) and by and large he has been more of a hindrance than a help to the attack recently.

In the first half against Forest he should have buried a one-on-one chance but hesitated and was tackled, then let the ball run entirely when a first-time shot beckoned minutes later.

His hold-up play was poor, he lost possession too easily and a couple of easy passes were way too sloppy.

Second half started the same way as he tamely hit one at the keeper after a great piece of pressing from Keita, before Jota went into the No9 role as the Reds made four subs just past the hour.

This is Jota, and this is what he does: the most ‘moments’ of players that Liverpool possess, the Jimmy Greaves of the current era who can offer nothing all game, yet take the most decisive touch of all.

And that’s why it was only for one second: you can’t take the Arsenal goal out of the equation, because that’s a big part of what Jota is.

Frustrating, not of the technical level of peak Mo or Sadio, but impossible to tie down all game.

And so up he popped, and through Liverpool go.

It’s a squad game, but for how long? 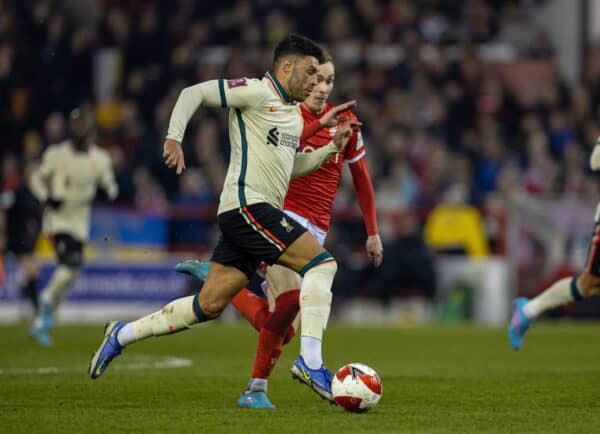 Lots of turnarounds here in terms of starting line-up and finishing line-up, but given the upcoming opponent and stage of the competition, is the FA Cup now a first-XI zone only?

Oxlade-Chamberlain was one of those in from the cold but didn’t really impress, despite being upset about being subbed. Elliott fits the same category.

Kostas Tsimikas delivered another fine assist, but maybe not an all-around stellar showing. He may, though, get the next game after the international break against Watford.

We are coming to the end zone and it wouldn’t be a surprise if we now see Klopp’s starting selections narrowed to just 15 or so players game-to-game.

Trent with a hamstring, not ideal at any time, less so at this stage of the season.

We already know there’s nobody directly replacing him and Klopp has said as much, so the options are the young, direct runner (Bradley), the experienced versatile man (Milner) or the centre-back (Gomez).

Gomez definitely put in another decent performance here, perhaps placing himself at the head of the queue, albeit Klopp had spoken as though Milner was the first-choice back-up but he was out injured for this one.

Gomez got into the final third whenever he could, linked well and still made the defensive recovery runs whenever needed, only really losing one challenge when he got booked.

His crossing is of course not elite – he tends to fire over as hard as he can, which generally goes near post and is easy for the keeper – but it’s about getting options around him to pass to or encourage a clipped ball instead.

Hopefully Trent comes back soon and this is all irrelevant, but the plan has to be in place anyway.

For Gomez, it could be argued that he was the only one of the ‘squad players’ to have really taken his chance in this match. 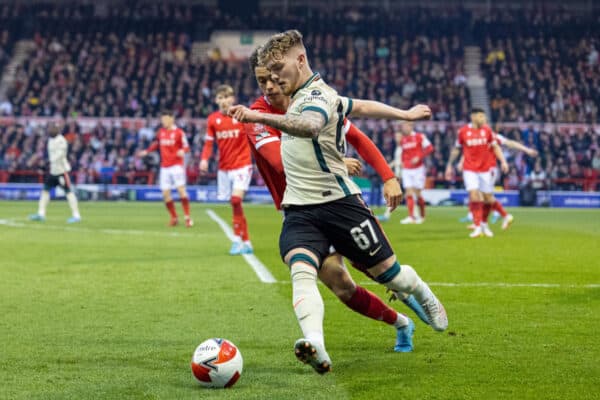 Just one start for Elliott after his comeback from injury before today, so it was a real positive for him to be named in Salah’s role at Forest.

Minutes have been hard to come by in midfield so this was a rare chance to see him out wide – in fact, the first time he’d played the role for Liverpool since February 2020.

He was lively and involved early on, without ever presenting a threat on goal, often seeing play go through him with Gomez on the overlap.

However, that level of involvement seemed to quickly seep away.

A few decent moments of work rate and movement, a few more minutes in the legs, but no spark of quality which might suggest he’s banging on the door of the XI once more.

He played just over an hour, part of the first quartet of changes from Klopp. 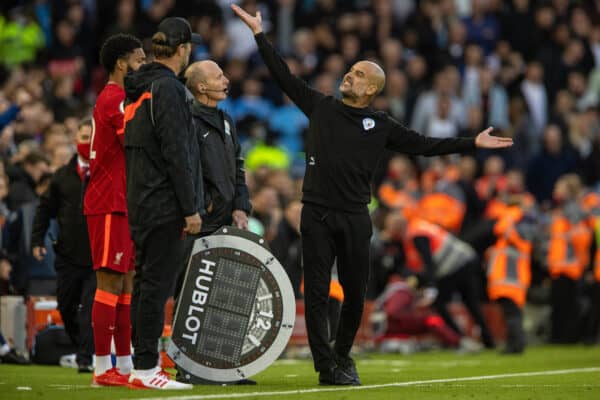 Man City, Liverpool and pretty much all the silverware. One of us will be in this final, lifting the league title and has already won the other cup.

Both are still gunning for European glory, too – at least we can’t meet them there until the final itself, otherwise things would get very repetitive in the next few weeks.

As it is, we are off to Wembley and there we’ll play City just a week after the away league game.

Lots to look forward to and be nervous about!