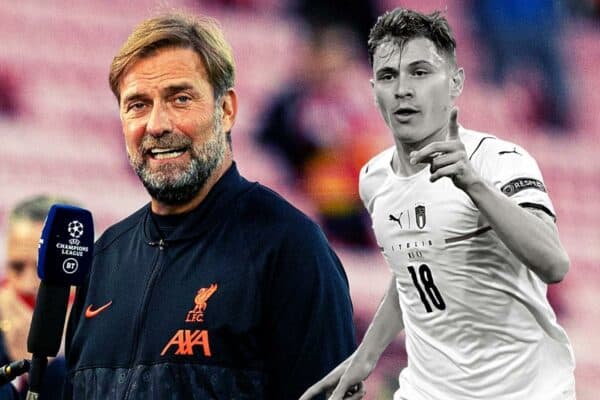 Jurgen Klopp is “really happy” Inter Milan will be without midfielder Nicolo Barella on Tuesday night, with the 25-year-old in supreme form last time out in Serie A.

The Liverpool manager is aware of the danger posed by Inter despite holding a 2-0 lead in the Champions League last 16, with Simone Inzaghi’s side thrashing Salernitana 5-0 at the weekend.

Barella, the Italy midfielder, was credited with two assists in that win, but will miss the trip to Anfield – as he did the first leg at the San Siro – having been sent off against Real Madrid in the final game of Group D.

For that, Klopp is “really happy,” due to Barella’s influence, but as he spoke to reporters on Monday, he outlined the threat Liverpool will face.

“The danger, everybody knows about. It’s a 2-0, I think it’s the lead that got turned over most often in the history of football,” he said.

“If you’re at half-time being 2-0 up and you have a team who thinks ‘we are halfway through’, you are already on the wrong path.

“We are long enough in this, we know that. It’s a much better result than I would have expected, to be honest, before we played there.

“The game didn’t look like we would win it 2-0 for most of the time, it was a really tough tie and a really difficult game to play.

“We knew before they had quality; after, we know they have real quality. So now they will show up here.

“[They] won the last game [in Serie A] 5-0 – yes, against the bottom team in the table, but still really impressive.

“When we saw the game, we were really happy Barella is not playing, because he set up I think three or four!” 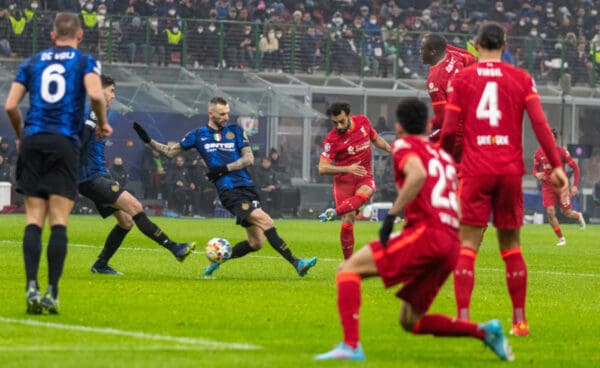 With no away goals in this season’s Champions League after a controversial rule change from UEFA, the two scored at the San Siro will not be as valuable as they would in previous campaigns.

Either way, Klopp insisted Liverpool would not be looking to simply hold onto their lead to book a place in the quarter-finals.

“[Inter are] a really good, really experienced team and they don’t come here as tourists,” he continued.

“I know that, they want to chase the game.

“And that’s what we want to do, because we are not a team who defends results or whatever, or tries to get through somehow.

“We want to attack the game again. Let’s see what we can get for it.”