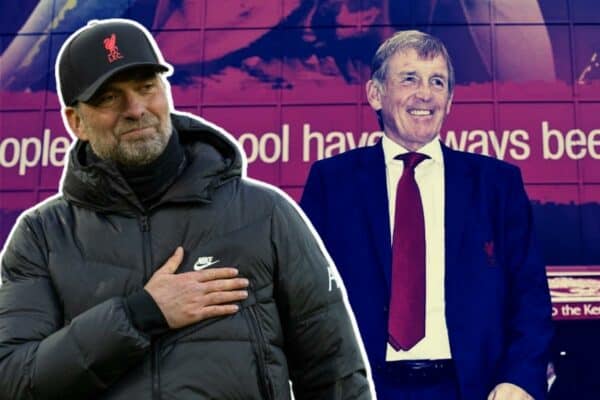 Jurgen Klopp has been at the helm for nearly seven years and has led Liverpool to five trophies, and the win over Norwich on Wednesday saw him equal Kenny Dalglish‘s win record.

Klopp has overseen a new era for the Reds, one many hope will see a number of chapters added to it throughout the remainder of the season following on from the League Cup success.

Only five managers in Liverpool’s history have presided over more games for the club than Klopp, and his win percentage rate of 61.94 percent is bettered by only John McKenna, who was in charge for only 36 games.

It speaks volumes of the transformation and success Klopp has managed at Liverpool and his latest victory, against Norwich in the FA Cup, saw him catch Dalglish in the win charts.

The legend that is Dalglish twice took the helm for a total of 381 games, culminating in a total of 223 victories – a tally Klopp has now reached in 21 fewer games.

Only Bill Shankly (407), Tom Watson (329) and Bob Paisley (308) won more matches while in charge of the club. #LFC pic.twitter.com/YNjkOrPfVf

It’s a testament to Klopp and his team and his success does not look to be slowing down, with the Reds currently on an 11-game winning streak across all competitions.

And in total, only the greats Bill Shankly (407), Tom Watson (329) and Bob Paisley (308) have won more matches with Liverpool, but could Klopp catch Paisley at the very least?

He would need 85 to his name over the next two-and-a-half seasons before his current contract ends at the end of 2023/24, but he did offer a glimmer of hope that he could extend his stay.

In his pre-match interview ahead of the FA Cup win over Norwich, he said of a possible extension: “I don’t know. I really don’t know.

“Our owners understood that things would take time, we needed time obviously.”

We can certainly dream, and if it does come to fruition then he will certainly be hunting those legendary managers.

Most victories as Liverpool Manager